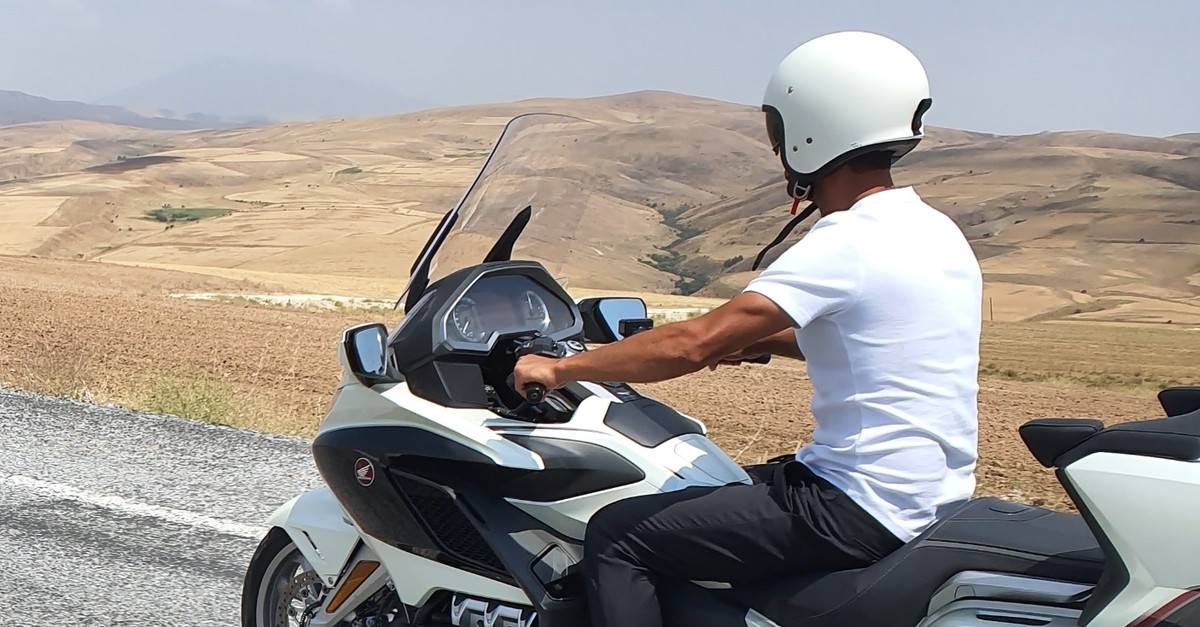 Former five-time World Supersport champion Kenan Sofuoğlu had the opportunity to visit many cities and districts on his week-long motorcycle tour of Turkey. Along the way on 4,000-kilometer journey, the famed motorcyclist shared the country's riches on his social media account. Sofuoğlu, who is also a deputy of the ruling Justice and Development Party (AK Party), shared his experiences with the Anadolu Agency (AA) saying that he had long been planning on organizing a motorcycle tour covering different parts of Turkey and that he finally set out after convincing his two friends.

The five-time champion is the most successful rider to have competed in the Supersport World Championship. He previously went on a motorcycle tour covering the Black Sea coastline but said the purpose of this trip was to visit the southeastern Anatolia region.

"There were some things I wanted to see there. I wanted to see it all. I shared my trip on social media. I drew a road map, and there were so many people waiting on the route. Some people I met told me they waited for hours to meet me," he said. Sofuoğlu said it was very productive to meet people from many provinces, districts, and villages, stressing the tour was more beautiful than expected.

"Not only in Turkey but in Europe, there are many people who follow us, who love us or wonder about Turkey. I actually shared my posts mostly for them to see. It was more productive than I thought. There were places where my late brothers and my father went for the Turkey Drag Championship," Sofuoğlu continued. In 2007, Sofuoğlu won his first Supersport World Championship. After his 2007 win, he became a Kawasaki rider in 2013, and won his third title the same year. In 2015 and 2016 he won two more titles. In May, after taking part in the qualification rounds of the 5th World Supersport Championship in Imola, a town in northern Italy, Sofuoğlu announced the end of his active sports career. He was elected as a parliamentarian of the AK Party from Sakarya province in the June 24 parliamentary elections in 2018.

"Until I reached the place where my father served, I tried to visit all the places he had been to. We visited many places from the historical Seljuk Cemetery in Ahlat to Malazgirt. I hope to do such tours again in the coming years. I was very proud to see that even when I took a break in a small village, hundreds of people gathered and welcomed me. We met them in the Marmara region, but I was really happy that people were greeting us with love on the other side of Turkey." During a week-long journey that covered about 4,000 kilometers, dozens of cities and nearly 100 districts, Sofuoğlu said he was eager to keep pushing on.

Sofuoğlu recalled that he met with 95-year-old Mehmet Yılmaz, who had been driving an all-terrain vehicle, known as an ATV, for many years in Ordu, and lost a race to him, and jokingly added that he had no chance of winning. "I don't think I can come to his age and be as healthy as him on a motorcycle. The reason I wanted to visit him was his love for motorcycles. He asked me for a favor. I hope to ask our president to fulfill that promise and I hope we will bring them together," he said, expressing his satisfaction of coming together with people from different regions. "I was wondering, is it my current political identity that attracts people's attention or my athlete identity? 99% are interested in sports, which is quite pleasing. I cannot and I will not say that I love my political identity anywhere. I never say that I am a deputy. For example, sometimes we meet people. I call myself a biker because people recognize me as such," Sofuoğlu said.

"Two cops stopped us at midnight. I asked if there was a problem and they said no. I was surprised because we weren't going too fast or did anything wrong. One of the police officers told me that their district police chief is a huge fan and he has heard that I was here and wants to see me. Five minutes later, the police chief came, and we had a long conversation. I have many stories like this on this journey," he said. "I saw people waving at us on the side of the road around Muş. 'How did you know I would be here at this hour?' I asked. 'We have been waiting here for hours,' they replied. This made me realize that our trip was very productive. I have gained a lot of experience; I understand that we should not forget these places and frequent our visits."

Sofuoğlu stressed that Turkey's beauty is not shown much in Europe and said that he tried to share the places with beautiful and interesting views on social media.

"When people in Europe see the places I go to, I want them to say, 'Turkey is a beautiful place.' Sometimes people misunderstand our posts. I know how some look at the country and how they try to present Turkey," he further stressed. "My goal is to show that Turkey has everything and it is one of the most beautiful places in the world. That is why I tried to share the most beautiful places and to show how developed our country is. I have received very positive feedback. Many foreign athletes also wrote to me. They had a different country in mind. There is no security issue in our country. I try to show that in my posts. I hope we have given good messages."