PYD/YPG should be left outside Syria ceasefire talks, as they are also terrorists, Erdoğan says 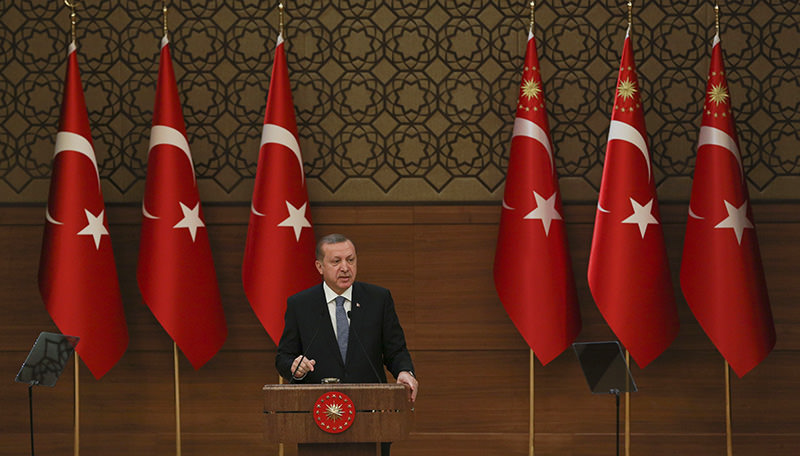 | AA Photo
by Daily Sabah Feb 24, 2016 12:00 am
President Recep Tayyip Erdoğan said on Wednesday that the YPG and PYD should be excluded from the Syria ceasefire process, while he reiterated once again that Turkey will continue to have a firm stance against all types of terrorism, regardless of the organization.

He said that while Turkey supports the ceasefire process, terrorist organizations PYD and YPG must be excluded, the same way Daesh is excluded.

''It is a complete lie that they support the YPG and PYD for fighting Daesh, but Al-Nusra fights Daesh too'' Erdoğan said, adding that the West labels some as the 'good terrorists' while others as 'bad ones.'

The president underscored that there is no such thing as good or bad terrorist and that all of them should be treated with the same determination.

Erdoğan also touched upon the Peoples' Democratic Party's (HDP) support for the PKK and urged the Grand National Assembly of Turkey to take action against deputies who promote the terrorist organization.

'' Those who support terrorist organizations are not deputies, but terrorists'' Erdoğan said, and added that Turkey will continue to retaliate against terrorist attacks.

Erdoğan's criticism came following the attendance of a HDP deputy at a memorial organized for the suicide bomber who killed 29 people in Ankara.

He harshly criticized the party for openly providing weapons, shelter and support for the PKK terrorists.

''I am against closing political parties'' Erdoğan said and added that individual punishment must be given for those who support terrorism.

He underscored that the Kurdish population has suffered the most from PKK terrorism and have been pushed out of their homes as a result of the terrorist attacks.

Erdoğan also said that the Assad Regime did not even give identity cards to Syria's Kurdish population, but are now cooperating with Kurdish terrorists.

The President noted that Turkey does not have any problems with the Kurds and has opened its doors to over 200,000 Kurds fleeing the conflict in Kobani.

The president also said that Russia is not Turkey's enemy, and noted that Turkey did not impose sanctions on the country when the rest of the world did.

He noted that it is unreasonable to ask Turkey why it shot down a Russian fighter jet and said that instead the question should be 'why did Russia violate Turkish airspace?'