President Erdoğan says terror has no religion during Nigeria visit 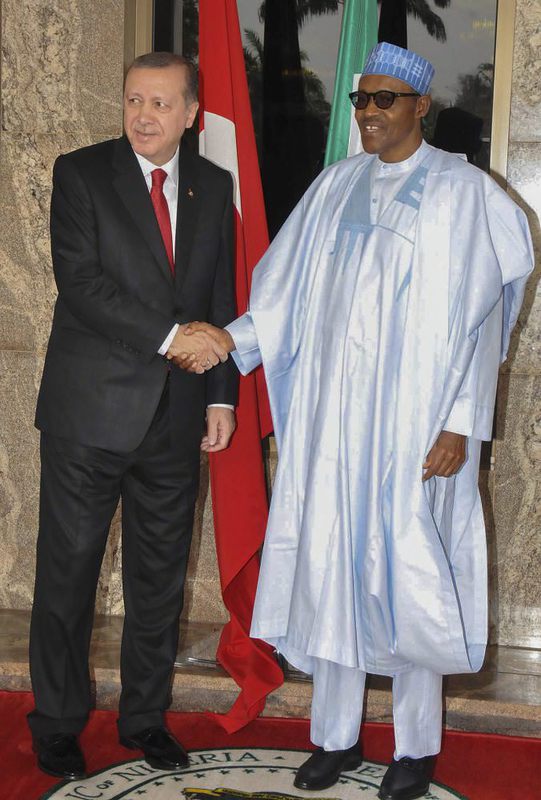 During the third leg of his official visit to West Africa, President Recep Tayyip Erdoğan drew attention to the turmoil in the Middle East and Africa and said Turkey does not think it is right to act indifferently toward terrorist organizations. His remarks came after officials from the U.S., Turkey's NATO ally, reiterated that they do not see the PKK's Syrian affiliate Democratic Union Party (PYD) as a terrorist organization and that they will continue to support it and its People's Protection Units (YPG) militia. Speaking in Nigeria at a joint press conference with Nigerian President Muhammadu Buhari, Erdoğan said Turkey is always ready to cooperate with Nigeria on its counterterrorism efforts.

"As a country that has suffered from terrorism for a long period of time, every single attack that takes place in Nigeria is highly upsetting to us. On behalf of my nation, I would like to extend my condolences for the Jan. 31 and Feb. 9 terrorist attacks," he said.

Erdoğan started his trip in Ivory Coast and later went to Ghana, where he reiterated his saying: "The world is bigger than five," in reference to the five permanent members of the U.N. Security Council. He invited African countries to join Turkey's efforts to secure unity in the face of terrorism and poverty. He cited the U.N.'s inability to resolve the Syrian civil war due to the competing priorities of the "five," arguing that the current state of affairs is unsustainable.

Erdoğan also said that Turkey is determined to contribute to peace both in Ghana and its region, and to boost economic ties. "Both Turkey and Ghana are determined to expand mutual cooperation. There is a very obvious political will between us to do that," he said.

Erdoğan was received with an official welcoming ceremony by Ghanaian President John Dramani Mahama at the Flagstaff House after the two leaders held a joint press conference. Erdoğan reiterated that the United Nations should be reformed with regard to providing aid to underdeveloped countries and said that Turkey and African countries suffer from terrorism and must take a united stance against it. He said that over the last five years Ghana and Turkey have signed at least 18 agreements and memorandums of understanding. "Ghana is still Turkey's number four trade partner in the sub-Saharan Africa region," he said.