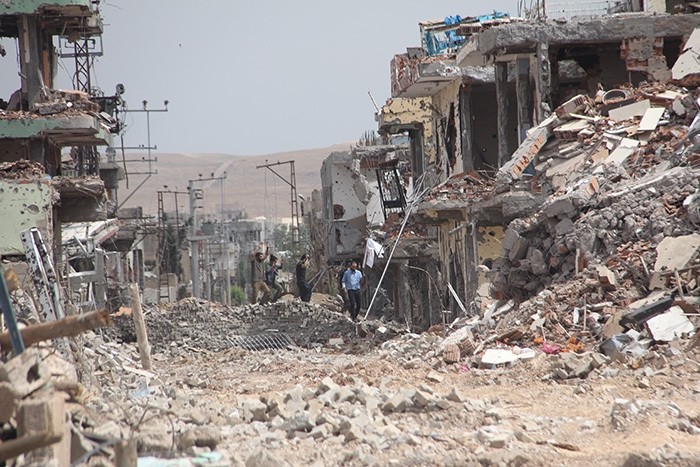 Eight more PKK terrorists, including one woman, surrendered early Friday during counterterrorism operations in the southeastern district of Nusaybin. The total number of terrorists who have surrendered this week has now risen to 75 as of Friday

Eight more PKK terrorists, including one female, surrendered early Friday during counter-terrorism operations conducted by security forces in the southeastern province of Mardin's Nusaybin district, military sources said in a statement. The total number of surrendered terrorists this week has now risen to 75 as of Friday.

In videos released by the security units, surrendered terrorists are seen expressing their regret having joined the PKK's ranks and called on their friends to give up fighting against the state.

Meanwhile, another terrorist who was wounded was captured during the operations. Security sources said the reports that five PKK terrorists died as a result of a bomb detonation were false claims, adding that they were killed during clashes with security forces. The counter-terrorism operations in the district have been ongoing since March 14. The operations are meant to fill in PKK-made trenches, tear down barricades, destroy homemade explosives and re-establish public order in the region.

Some 437 terrorists have been killed since the start of the operations in the Nusaybin district alone, whereas 400 barricades have been torn down, around 35 ditches have been filled and 1,024 handmade explosives have been destroyed.

Turkey's southeast has been the scene of significant military operations since December 2015 as police and the army seek to clear the PKK terrorist organization from urban areas.

Amid the intensifying military operations in Nusaybin, security units called on a group of terrorists in the neighborhood of Fırat to surrender. A group of terrorists had reportedly responded positively to the call and walked toward the military unit with their hands in the air. However, one of the five terrorists detonated the bomb strapped to his body and killed himself and the four others next to him.