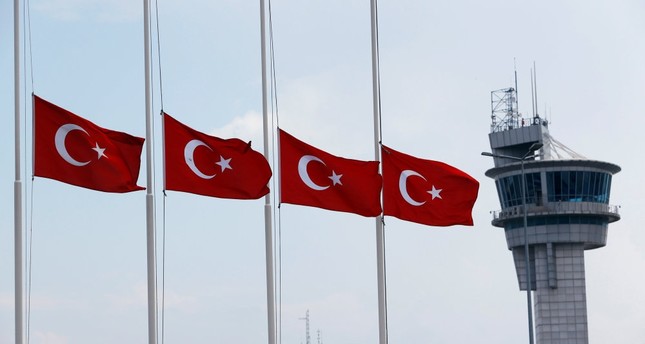 At a time when normalizing ties with several countries and forging better relations in the region to benefit the country, Istanbul has been hit by a deadly terrorist attack that killed at least 41 and wounded well over 200

A week that started positively in terms of normalizing ties following reconciliation with Israel, warm words exchanged between President Recep Tayyip Erdoğan and Russian President Vladimir Putin and signals for a thaw with Egypt, was hit by a deadly terrorist attack in Istanbul's Atatürk International Airport, killing at least 41 and wounding well over 200.

With the aim of "increasing the number of allies," Ankara had embarked on a new era of normalizing ties with Israel, Russia and Egypt, all of which it has had frosty relations with in recent years.

"Tuesday's terror attack is directly connected to Turkey's efforts to normalize ties and become a key player in the region," Yaşar Hacısalihoğlu, Yeni Yüzyıl University's vice dean and a professor in the department of political science and international relations, told Daily Sabah.

Turkey and Israel signed a deal in Rome on the day of the attack to normalize diplomatic relations, which were damaged during a six-year rift.

Sour relations with Russia have also been bettered recently. Erdoğan and Putin talked on the phone yesterday after a seven-month hiatus. The two leaders agreed to enhance relations.

"This attack could be a protest by DAESH to the normalization of ties with Israel," Professor Dr. İlter Turan, a professor of international relations and former rector of Istanbul Bilgi University, told Daily Sabah.

"DAESH has been systematically trying to degrade Turkey's reputation with bombings. Normalization in relations is one of the reasons for them," Kurtuluş Tayiz, a columnist for the Akşam daily, told Daily Sabah.

"Whether it was a move by an unknown power to spoil Turkey's normalization process with the three countries is unclear. It is more likely that the attack was against the Israeli thaw," Turan speculated.

"It is a power struggle between states. It is a war being waged against Turkey. Some are disturbed by Turkey's efforts to mend ties and make moves," Hacısalihoğlu contended, adding that better relations with Russia could lead to significant developments in Syria regarding the Democratic Union Party (PYD) and DAESH, which does not please some.

"Now that Turkey has restored relations with Israel and Russia, some countries may force Ankara to embark on a ground operation in Syria," Tayiz said, adding that bombings are aimed at provoking Turkey.

On Tuesday, Prime Minister Binali Yıldırım said in a televised interview that Turkey is ready for a thaw with Egypt. "There is no obstacle in terms of commerce. Maybe there will be grounds in the future for normalization. Relations could even start at the ministerial level. We are ready for it," Yıldırım said.

Stressing that no terrorist attack takes place without a political aim, Hacısalihoğlu said that the alliances forged by Ankara will benefit it, which is to the dislike of many.

"We welcome all efforts to improve relations between Egypt and Turkey," Egypt's Foreign Ministry spokesman Ahmed Abu Zeid said in a written statement.

Turkish-Egyptian relations deteriorated after Egypt's first democratically elected president, Muhammed Morsi, was ousted in July 2013, as well as the human rights violations that ensued. Erdoğan long supported Morsi and his party, the Muslim Brotherhood, which has continued since they faced a brutal crackdown at the cost of souring relations with Egypt.