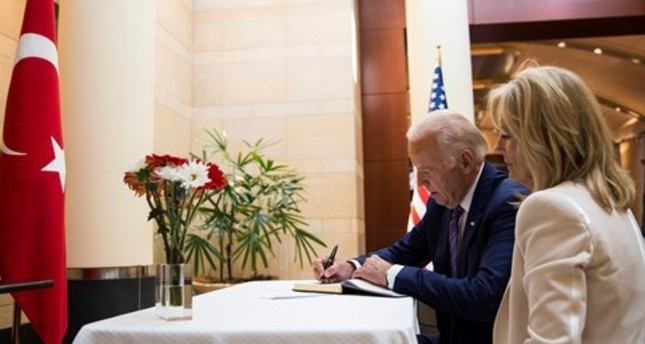 U.S. Vice President Joe Biden and his wife, Dr. Jill Biden signed a condolence book Wednesday at the Turkish embassy in Washington after an attack at Istanbul Atatürk Airport that left 44 killed.

"The attacks on the airport had the effect of unifying the world against terror but that defeating them required some time." Biden said after the signing.

Biden wrote "I am absolutely convinced that combined with our resolve, we will wipe out the so called caliphate in Iraq and in Syria. The world is united behind Turkey in our resolve." on the condolence book at the embassy.

At least 44 people were killed, 130 injured Tuesday in a triple suicide bombing and gun attack at Istanbul's main Atatürk airport, in the latest deadly strike to rock Turkey's most-populated city, which had many similarities with the deadly attacks carried out in Brussels in March.

Flights partially resumed in the airport on Wednesday morning, while many of the schedule flights were cancelled or delayed.

Reports have said that one Ukrainian and one Iranian national was among those who were killed by the terrorist attack in the airport.

Among the 37 identified victims were 10 foreign nationals and three dual citizens, the Istanbul Governorate said in a statement on Wendesday.

Share on Facebook Share on Twitter
Previous in War On Terror Police in Istanbul and İzmir conducted a series of raids on Thursday... Next in War On Terror The mastermind behind the deadly PKK terrorist attack in Ankara, which...
DAILY SABAH RECOMMENDS