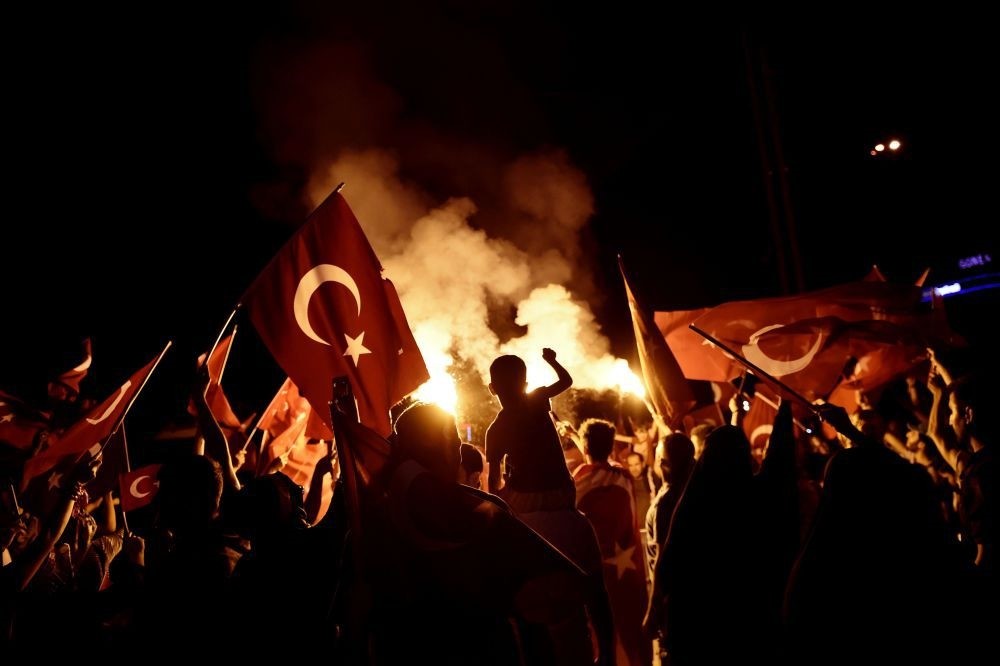 Ankara is requesting the extradition of Gülenist Terror Organization leader Fethullah Gülen from the U.S. and urging the Obama administration to do what close alliances require. The U.S.'s reluctance, however, has led to millions of Turkish citizens thinking Washington might be behind the Gülenist coup attempt

Following the U.S.'s failure to take a strong stance against the Gülenist coup attempt and reluctance to extradite Gülenist Terror Organization (FETÖ) leader Fethullah Gülen, the Turkish public is beginning to accuse U.S. President Barack Obama's administration of secretly backing the coup plotters. As President Recep Tayyip Erdoğan and Prime Minister Binali Yıldırım put more pressure on Washington to extradite Gülen, the public will not accept any response from the U.S. other than handing him over to Turkey. "It is by no means acceptable for us, the Turkish public, that the U.S. still wants proof from Turkey. It's become an issue of trust," Salih Demir, a 37-year-old doctor, told Daily Sabah.

Responding to U.S. Secretary of State John Kerry, who said Turkey must show evidence, Prime Minister Yıldırım said: "I say to the U.S. administration [regarding the extradition of Gülen], a group's attempt to end democracy in a country is proof." Erdoğan also slammed Washington for asking for evidence, saying: "If we are strategic partners, you have to extradite Gülen to us." Amid uncertainty about whether the U.S. will work with Ankara on Gülen's extradition, the U.S. ambassador to Turkey, John Bass, released a statement on Monday in which he said: "If Turkey decides to submit an extradition request for anyone legally residing in the United States, it will be considered under the terms of the U.S.-Turkey extradition agreement."

Melike Oran, a 32-year-old architect, said Turkey has witnessed the bloodiest coup attempt ever in its history, and asked the U.S.: "What did the U.S. do after 9/11? Did they show the world proof for every move they made?"

The U.S.'s perceived mixed reactions to the coup attempt in the first hours also led to confusion among millions of Turks. While Kerry said Washington hopes for stability and peace in Turkey, he said the U.S. supports the democratically elected government in Turkey after the coup failed.

In addition, the U.S. Embassy in Ankara at first described the failed coup attempt by a Gülenist fraction within the military as an "uprising," and then changed to using the word "coup" to describe the events unfolding.

The U.S. Embassy in Ankara informed U.S. citizens about the failed coup in a message titled "Emergency message for U.S Citizens: Turkish Uprising." The message, published on the embassy's website and posted on the U.S. State Department's Twitter account on July 16 at 2:53 a.m., said: "Shots fired and explosions have been heard in Ankara and both bridges in Istanbul, the Bosphorous and Fatih Sultan Mehmet, are now closed."

Demir called Washington's mixed remarks "troubling." "As a close NATO ally, the U.S. should have presented a firmer stance. I'm disappointed about this," he added.

The following day the message was removed from the embassy website, even though it remains available on the official Twitter account. Asked why the U.S. Embassy called the coup attempt an uprising, a senior official from U.S. Embassy in Ankara said that their information was based on Turkish news and the first Turkish word used by Turkish officials to define the incident was "uprising."

Ali Osman Kaçar, a 51-year-old engineer, said he suspected at first that the U.S. could be behind the coup attempt, as "Gülen takes shelter in the U.S." "The U.S. must extradite Gülen. I think they have close ties and the U.S. secretly supported the failed coup attempt," he contended.

As another example that led to quite a lot of confusion for Turks, the global intelligence company Stratfor shared several tweets on Friday night about the flight path of Erdoğan's business jet while publishing that the failure of the Turkish coup would harm the fight against DAESH and weaken Turkey.

Stratfor also published erroneous information on the night of the coup, claiming that Erdoğan had requested asylum in Germany.

Regarding Stratfor's tweets, Oran said that such smear campaigns are deliberate. "Tweeting about Erdoğan's flight path? Why? I cannot help but think that the Gülenist coup attempt was supported by the West," she said.
RELATED TOPICS