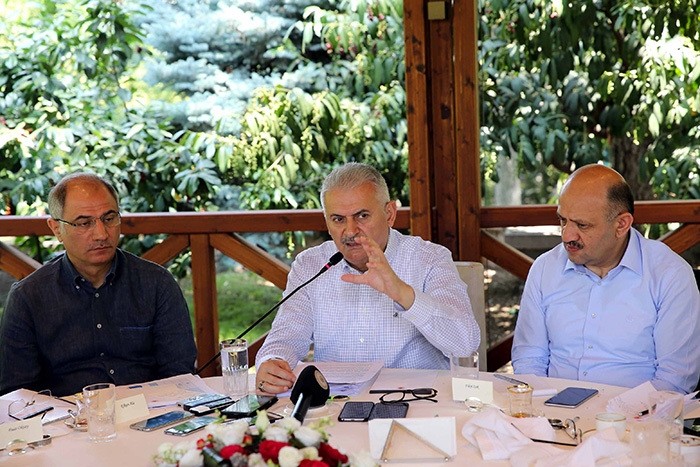 Prime Minister Binali Yıldırım said on Sunday that there is no doubt the U.S.-based fıgure Fetullah Gülen was at the center of July 15 coup attempt.

Yıldırım said military schools had been the source for Gülenist Terror Organization (FETÖ), in remarks made to the media at his official residence in Ankara,

"They have taken the control of the [military] schools, and they have fortified their power from these schools," he said.

"The ones who tried to refute it are in a vain effort. Fetullah Gülen is at the center of the coup," he added.

Under a statutory decree, seen as part of the Turkey's current three-month state of emergency, military personnel found to be national security threats as well as members of FETÖ, or linked to FETÖ, have been stripped off their military ranks and expelled from the army.

The decree also closes all of Turkey's war academies, military high schools, and high schools that train non-commissioned officers, to be replaced by a new university called the National Defense University underneath the Defense Ministry.

The university will offer new institutions to train staff officers and give postgraduate education, including war academies and vocational schools that train non-commissioned officers.

In addition, the decree assigns Ankara's Gülhane Military Medical Academy and military hospitals across Turkey under the Health Ministry.

About his phone call with U.S. Vice President Joe Biden on the extradition of Gülen last week, Yildirim said: "What I said to Joe Biden was: 'Let the evidences speak for itself after July 15.' What evidence? He tried to stage a coup, killed people, and yet you still ask for 'evidence'."

He said he would receive the chairman of the U.S. Joint Chiefs of Staff, Gen. Joseph Dunford, at the Çankaya Palace on Monday. "U.S.A. is our strategic partner, so we just rely on their official declarations."

Turkey declared a state of emergency on July 20, just days after a group of rogue military officers were defeated in their July 15 coup attempt.

During a state of emergency, the Cabinet has the right to issue statutory decrees under the president of the republic without regard to routine procedures and restrictions in Article 91 of the Constitution. These decrees were first published in the official gazette and then submitted to parliament for ratification.

More than 230 people were killed and nearly 2,200 injured in the coup attempt, which Turkish officials have repeatedly said was carried out by FETÖ, led by Gülen.