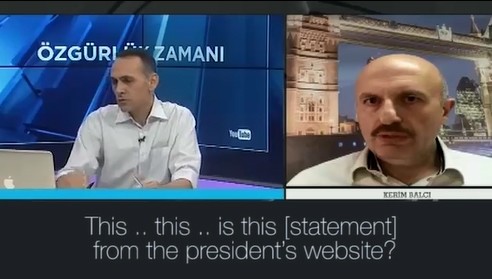 Footage from July 15, during the early hours of the failed Gülenist coup attempt, exposed a former Zaman daily journalist being shocked when he found out that President Recep Tayyip Erdoğan connected live to CNN Türk news, asking people to take to the street to defend demoracy against the coup attempt.

In the video, the journalist, Kerim Balcı, asked people not to resist against the coup and not to listen to President Erdoğan.

"There are claims that the President is calling on the people to stand against this [the coup]," the host of the show tells Balcı.

Shocked that the president is still alive, "Did he say these things in person?," Balcı asks in the video.

"Yes, he made a statement on CNN Türk," the host responds.

"(Sıgh…) The president made me say 'our president' a few times this evening. But if this statement is true, I'm taking back my words. The president is irresponsible. Urging unarmed civilians to go against armed people is a grave mistake. Just like what happened in Egypt and Syria in the past," Balcı says.

In addition, Balcı seemed to belittle Turkish citizens, saying they will not be able to stand against the coup attempt.

"Our people don't even know how to lie on the ground, let aside how to take shelter from a bomb or a G3 rifle."

Balcı also attempted to delegitimize the president's call to take to the streets, saying, "The president's words are non binding in the current situation. I don't believe that he can protect his mental faculties in his current state."

On July 15, a group of rogue soldiers linked to the FETÖ attempted to topple the democratically elected government in Turkey and bring martial law in effect.

Opposition parties have united in condemnation of the coup attempt, denouncing it in the harshest terms and underscoring their determination to preserve democracy and the rule of law in Turkey.