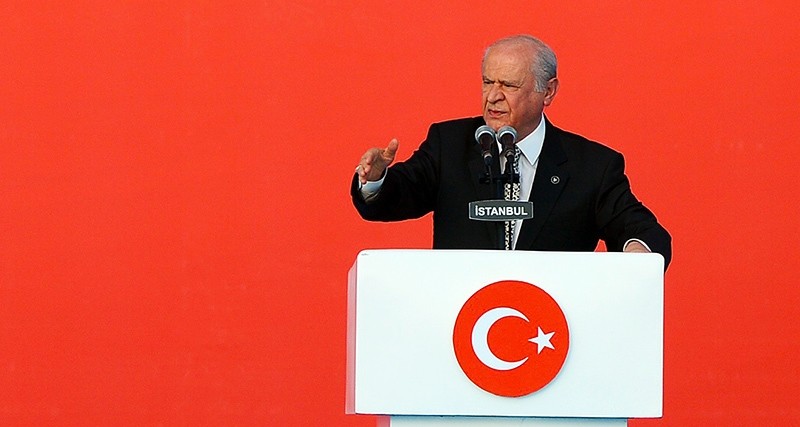 July 15 was another invasion attempt by the pawns of imperialism posing as Turkish soldiers, an attempt which targeted Turkey's unity as the Armistice of Mudros and Treaty of Sèvres, MHP chairman Devlet Bahçeli said in his speech at the August 7 Democracy and Martyrs' rally in Istanbul.

He called the Gülenist Terrorist Organization (FETÖ), which is held responsible for the coup attempt, a "cancer" and called on Turks to unite against the coup plotters.

Let's show the power of Turkey to the U.S. who is making all sorts of excuses to not extradite terrorist Gülen, he said sternly.

Bahçeli, who controls the Turkish parliament's fourth party, said the attempted coup was a "fresh attempt to invade, carry out a massacre and destroy Turkey".

Turkey's post-coup attempt Democracy and Martyrs' Rally will mark a fresh chapter in history, he said.

Bahçeli praised the popular resistance to the July 15 attempted coup and said: "I watch Turkey beaming with pride, there is faith here, will here. A new voyage begins from Yenikapı."

He added: "People stood tall, taught a lesson to the traitors and terrorists of the July 15 coup bid."

Crowds gathered in Istanbul on Sunday ahead of a cross-party Democracy and Martyrs' Rally called to protest the defeated July 15 coup launched by the Gülen Terrorist Organization (FETÖ).

The president asked Turks across the country to extend their "democracy watch" rallies until Wednesday. Democracy watch rallies were held in cities across the country since the defeated coup, which martyred 240 people and wounded nearly 2,200 more. "Today is a comma [pause] in democracy rallies, we will end the rallies on Wednesday," he added, before asking the crowds "Is that alright?" and receiving a resounding "yes".