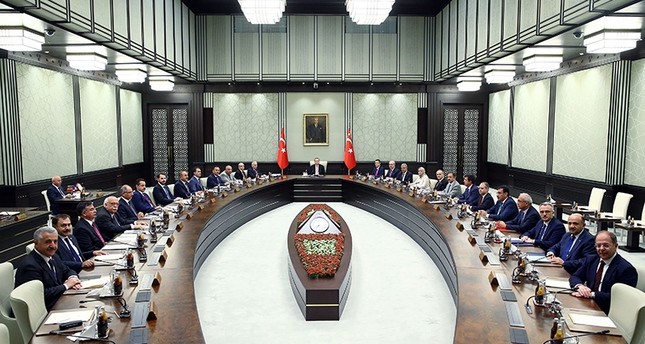 The Cabinet meeting held at the Presidential Palace and chaired by President Recep Tayyip Erdoğan discussed the "cleansing operations" targeting members of the Gülenist Terror Group (FETÖ) and the recent increase in PKK attacks in the country. Chief of General Staff Gen. Hulusi Akar also gave a presentation regarding the July 15 coup attempt. He addressed the details of the night of the failed coup bid for the first time at the ministerial level.

Speaking to the press following the five-hour meeting yesterday, Government spokesman, Deputy Prime Minister Numan Kurtulmuş, said that those involved in FETÖ fraud on the 2010 nationwide Public Personnel Selection Examination (KPSS) will be sacked from their jobs. It was revealed that 580 women who are suspects in the 2010 KPSS cheating investigation are wives of military officers and they passed the exam answering more than 100 questions correctly.

Muhammet Sait Gülen, FETÖ leader Fethullah Gülen's nephew, confessed to cheating on the KPSS exam. He was detained on July 23 in eastern Erzurum province as part of an investigation into the putsch.