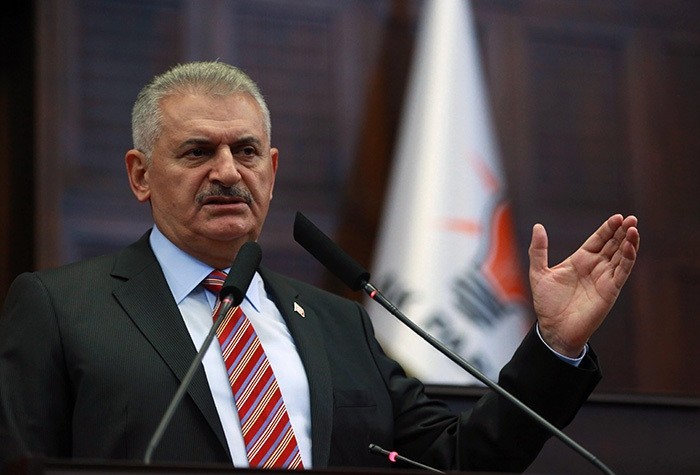 At the Justice and Development Party's (AK Party) weekly parliamentary group meeting Prime Minister Binali Yıldırım vowed to eliminate PKK terrorism, and stressed: "The PKK is not concerned with Kurds. It is rather our Kurdish citizens who have an issue with the PKK and our duty is to eliminate this issue." Yıldırım spoke of the PKK's abduction and murder of AK Party Youth Branch Chairman Naci Adıyaman along with his brother in the Beytüşşebap district of the southeastern Şırnak province and condemned the PKK, saying it "sheds blood and murders innocent civilians." Commenting on recent statements from a former U.S. ambassador to Ankara, James Jeffrey, who said: "Saudis, Egyptians are cringing at us under all circumstances … [President Recep Tayyip] Erdoğan is clashing with us, holding our contradictions against us and is not trying to become our friend," Yıldırım criticized Jeffrey and said he would "be labeled as reasonable by them if you cringe at them. However, if you tell the truth you become the disliked man and are labeled a dictator."

In response to senior PKK leader Cemil Bayık's recent threat to bring PKK violence into cities, Yıldırım again condemned the recent PKK car bombing in the southeast in which five police officers and two civilians were killed and 45 others were wounded. Yıldırım said: "The PKK and its armed wings have shed blood once more. … Our duty is to eliminate this issue and remove the bloody-handed terror organization from between us and resolve the region's issues with the people of the region." He asserted the PKK aims to create instability in the region, and claimed that the "higher-mind" of the PKK wants to turn Turkey into Syria, Yemen and Egypt. "Following FETÖ's [Gülenist Terror Group] coup attempt, the PKK terror organization has shown its face once more, but the barons of the terror organization will pay for all the blood that they have shed," he said.

He said Ankara has two demands to resolve the Syrian crisis. The first is maintaining Turkey's territorial integrity and the other is maintaining Syria's territorial integrity. "Iran and Turkey are the countries that best know the region and these countries will be the ones to offer the best solution to the problems," he said, and added: "A solution [to the Syrian civil war] will be found if the U.S., Russia or other coalition forces want it to be found."