US praises Turkey’s efforts to liberate Manbij from Daesh terror 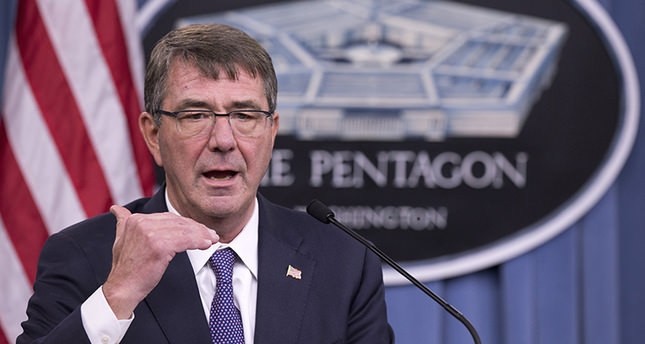 The U.S. Department of Defense released a statement late Monday regarding the liberation of the northern Syrian city of Manbij from Daesh militants. In the statement, Secretary of Defense Ash Carter praised Turkey's support to the operation to expel terrorists from the city.

"I want to congratulate the people of Manbij, the Manbij Military Council, the Syrian Arab Coalition and the Syrian Democratic Forces for their success in liberating Manbij city from ISIL's hateful rule. Their success, enabled by critical Coalition support, is another significant milestone in the campaign to deal ISIL a lasting defeat," he said, using an alternative acronym for the Daesh terrorist organization.

"Manbij city was a key transit point for ISIL fighters going into both Syria and Iraq, and for its external operators plotting attacks against our allies, our partners, and our homeland. The success in Manbij city will also help reinforce the growing isolation of Raqqa and enable us to achieve the next objective of our campaign in Syria - collapsing ISIL's control over that city," he added.

Touching upon Turkey's support and efforts to remove Daesh terror from the town, he said "I also want to take this opportunity to express my appreciation to the Turkish government for their support to this critical operation."

Stating that a difficult time is ahead for the people of Manjib as they try to rebuild their homes and the society which was destroyed by Daesh, Carter called on all members of the coalition to help them.

In the meantime, "the military coalition will continue to work with capable and motivated local forces to defeat ISIL and ensure it remains defeated," Carter concluded.

The YPG-dominated Syrian Democratic Forces (SDF) announced on Friday that they had seized full control of the northern Syrian town of Manbij from Daesh. Upon defeat, Daesh terrorists freed hundreds of civilians used by the extremists as human shields while retreating in northern Syria, U.S.-backed forces and a monitor said Saturday.