Turkey's border with Syria must be cleansed of Daesh, FM Çavuşoğlu says 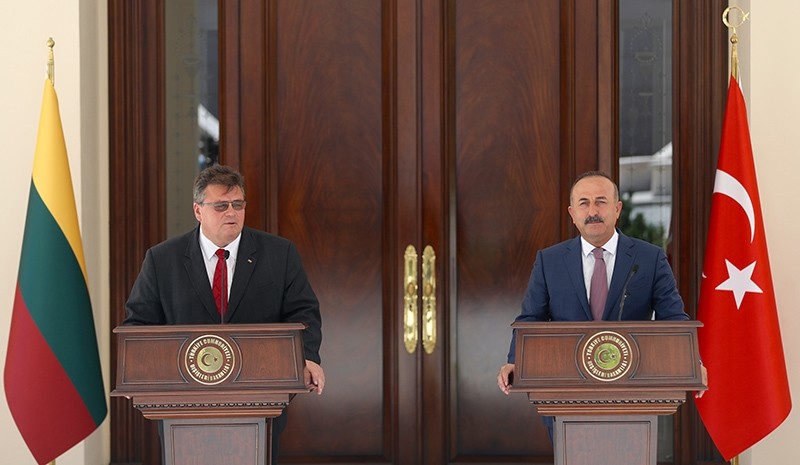 Foreign Minister Mevlüt Çavuşoğlu said on Monday that Turkey will provide the necessary support to "cleanse" Turkey's border with Syria of DAESH. The foreign minister on Monday spoke alongside Lithuanian Foreign Minister Linas Linkevičius, who was the first foreign minister from the EU to visit Turkey since the vicious July 15 failed coup attempt by the Gülenist Terror Group (FETÖ). While nearly 70 civilians were left wounded in a DAESH suicide bomb attack Sunday, the death toll has risen to 54 in the southeastern province of Gaziantep. Çavuşoğlu strongly condemned the attack, stressing that Turkey has been DAESH's main target due to counterterrorism operations being conducted against them.

Commenting on Turkey's fight against DAESH, Çavuşoğlu said that Turkey has deported nearly 4,000 people with links to terrorism and barred 55,000 people from entering the country. The foreign minister reiterated that DAESH does not represent Islam. Çavuşoğlu further said that it was only "natural" for DAESH to target Turkey and President Recep Tayyip Erdoğan considering the country's devoted efforts to combat the terror threat. "It is natural for DAESH to target Turkey and Erdoğan, who says 'DAESH does not represent Islam and they are not Muslim.' We will combat DAESH and other terror organizations until they are eradicated. We will also continue to support those countries that are in combat [with DAESH]… Our borders must be completely cleansed of DAESH," Çavuşoğlu said.

Addressing the stance the EU countries have taken on Turkey in the wake of the July 15 coup attempt, Çavuşoğlu said, "By stopping the coup attempt, the Turkish people have prevented regional instability that could have had an effect on Europe." He further said that Turkey has always been a significant contributor to the European economy, growth, stability and security, noting, "Unfortunately, some European countries have ignored this." Underlining that the "European states did not understand the gravitational pull of the coup attempt or they did not want to understand it," Çavuşoğlu also blamed this lack of understanding on the negative statements being made against Turkey. Additionally, Çavuşoğlu praised the cooperative efforts that the Council of Europe (CoE) has made with Turkey, saying: "We are continuing the entire process with the CoE with transparency and informing the Council of all the judicial steps we have taken. We hope the EU also has the same understanding and that dialogues with the EU will not be strained. However, [if the EU gains a mutual understanding] it is better late than never."

Also speaking at the joint press conference, Lithuanian Foreign Minister Linkevičius said, "We have to be more forward-leaning and more well-engaged to understand this situation better so that all who are guilty and all who have committed crimes against the state and democracy will be prosecuted in a fair trial." Linkevicius said Turkey is a key partner of Europe, a key trading partner and a NATO ally, stressing that he trusts the Turkish authorities will adhere to the fundamentals of freedom and human rights.