Ankara to urge US to stop supporting PYD, FETÖ 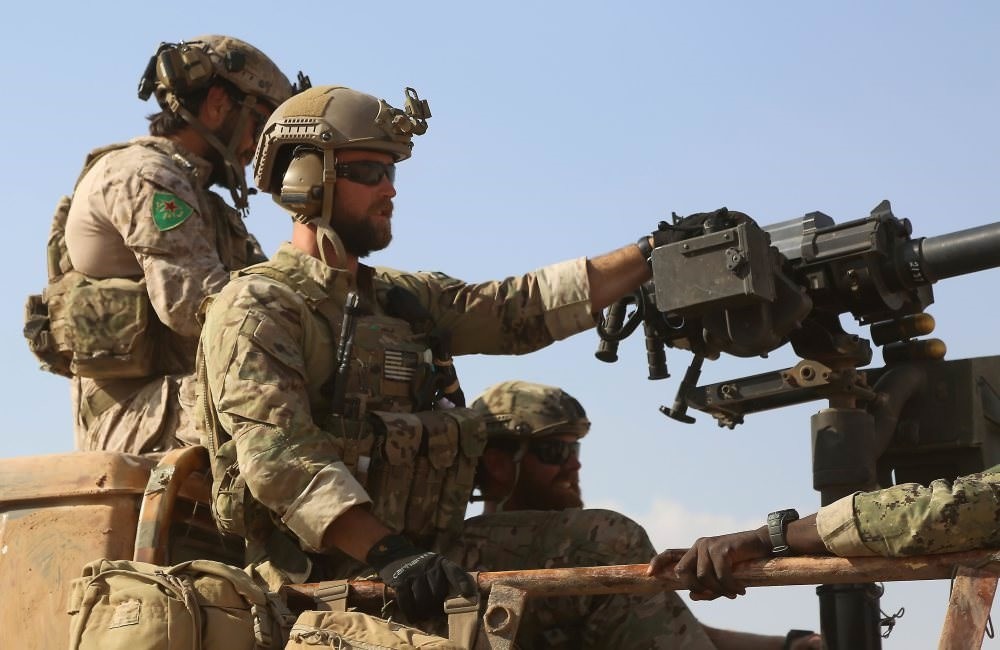 U.S. soldiers were seen wearing the insignia of the YPG in late May. The incident soured Turkish-U.S. relations to a great extent.
by Ali Ünal Aug 24, 2016 12:00 am

As U.S. Vice President Biden is set to visit Ankara to hold meetings with top Turkish authorities, Ankara is expected to call on the U.S. to stop backing the PKK's Syrian wing PYD and the FETÖ

As Turkey-U.S. relations are going through difficult times, U.S. Vice President Joe Biden is visiting Ankara Wednesday to express support for "ally" Turkey. As Biden is set to be the first White House official to visit Turkey following the failed coup attempt orchestrated by the Gülenist Terror Group (FETÖ) on July 15, Ankara is expected to give him a stern message, urging Washington to stop supporting the PKK's Syrian wing, the Democratic Union Party (PYD), and FETÖ. During his visit today Biden will meet Turkish Parliament Speaker İsmail Kahraman and pay a visit to Parliament building in the capital that was bombed during the July 15 coup attack. Biden will then meet with Prime Minister Binali Yıldırım at the Presidential Palace in Çankaya and finally be hosted by President Recep Tayyip Erdoğan at the Presidential Compound, becoming the first U.S. leader to go to the compound. Biden's meetings with President Erdoğan and Parliament Speaker Kahraman will both be closed-door meetings, while Biden and Prime Minister Yıldırım are expected to make a statement to the press after their meeting. Prior to the visit the White House stated that Biden will emphasize Washington's "ongoing strong support" for Turkey and condemn July's failed coup attempt.

"That is a coup attempt that was roundly and publicly condemned by the United States government and we continue to strongly support the democratic government of our allies in Turkey," spokesman Josh Earnest told reporters on Monday. Further commenting on Turkish Armed Forces' (TSK) hitting PYD and DAESH targets in northern Syria, Earnest stated that the U.S. will continue to support Turkey in its fight against all kinds of terrorism.

The visit is taking place amid Turkey's continuing fights against multiple terrorist organizations, namely DAESH, the PKK and FETÖ. Therefore the scope of the Turkish and U.S.cooperation against to these terrorist organizations will be brought to the table by Turkish officials and these issues are expected to dominate Biden's agenda.

Turkey has been identifying the Gülen Movement as terror cult since the country's National Security Council (MGK) started to consider it as a national threat last year. The issue of the extradition of FETÖ leader Fethullah Gülen, who resides self exile in Pennsylvania, U.S. is considered by Turkey as part of the anti-terror cooperation. Turkey is an active member of the U.S.-led anti-DAESH coalition, therefore ongoing efforts to eliminate DAESH in Syria and Iraq are also expected to be on the main agenda of the meetings. Biden and Turkish officials will focus.on details of the operation that will liberate Mosul from DAESH. In addition to Turkey's ongoing operations against the PKK, PKK-linked PYD's activities will be another major issue on the agenda. Turkey considers the PYD a Syrian extension of the terrorist PKK organization and already expressed its concerns about the expansion of the PYD-led Syrian Democratic Forces (SDF) in northern Syria.

As Turkey and the U.S.continue to take different positions on Syria and FETÖ, experts believe Biden's visit is unlikely to produce positive results between the two countries. According to SETA Foreign Policy Director Ufuk Ulutaş the U.S. supports two terrorist groups, namely the PYD and FETÖ, and relations might come to a point to reach a compromise between Turkey and the U.S. However, Ulutaş believes that the current situation reveals that both terror groups will be continued to be used by the U.S.''Even though the extradition of Fethullah Gülen is a political subject, the U.S. has been stalling, defending it as a legal issue instead. And its seems like the relations between the U.S. and Turkey will get more and more tense because of FETÖ,'' he said. Defining the PYD as the U.S.'s only ally in Syria, Ulutaş said there are no other actors beside the PKK left for the U.S. to support in Syria. ''For this reason the U.S. will keep on supporting the PKK. During Biden's visit, temporary steps to address the worries of the U.S. might be taken, but there is a very slight chance that any permanent solutions would occur in this visit.'' he added. Galip Dalay, the director of the Istanbul-based Al Sharq Forum, shared similar thoughts and said the PYD is almost the only actor the U.S. cannot dispense with in Syria.

''In such an equation, if the U.S. relinquishes the PYD, then it would seriously mean the U.S. would be revising its Syria policy and I do not think the U.S. would take this step,'' Dalay said. ''I do not think that it is possible to move forward between the U.S. and Turkey in terms of both FETÖ and Syria. But it is possible to increase coordination regarding both issues. Dialogue concerning FETÖ might be increased. And in Syria, the PYD might be prevented," he added.
RELATED TOPICS