Turkey had been planning Syria ground operation for the past two years, senior official says 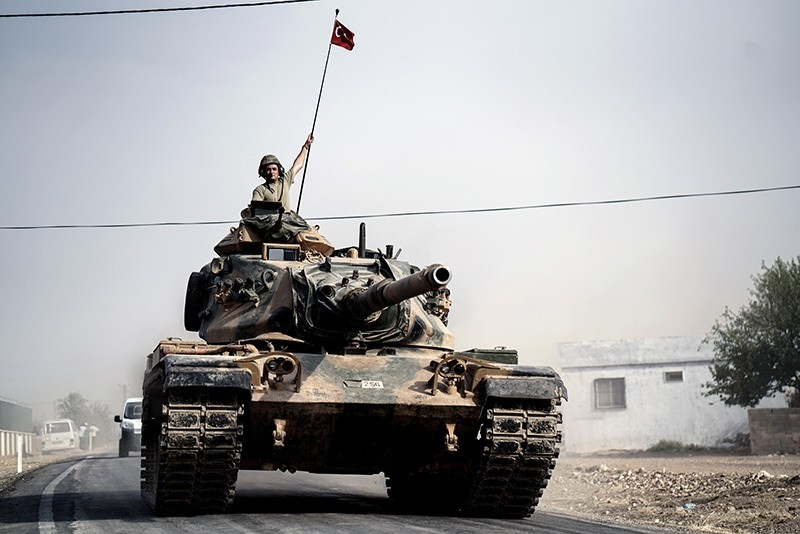 A senior Turkish official speaking to Daily Sabah said that the ground operation in Syria had been delayed for two years owing to a lack of U.S. support for the plans and resistance from the Turkish military, in addition to the hindrance of Gülenist officers and the crisis with Russia

As the Turkey-backed Free Syrian Army (FSA) elements, in cooperation with U.S.-led anti-Daesh coalition, launches Operation Euphrates Shield, the timing of the operation, along with its targets, has become the subject of debate by experts and news analysts.

Responding to the question of why Turkey hadn't launched an operation earlier, a senior Turkish official, speaking on the condition of anonymity, told Daily Sabah that the Turkish government has been working on a ground incursion for more than two years.

"We came closest to putting boots on the ground last year. In June 2015, Turkey discussed with its coalition allies, including the United States, the possibility of a ground incursion to liberate Jarablus from Daesh. Contingency plans were drawn up as a first step toward military action," the source said.

Although a large majority of Turks are still opposed to the direct involvement of Turkish troops in Syria, the government has faced domestic and foreign questions over Turkey's hitherto reluctance to launch an incursion into Syria. The issue is regarded to be amongst the key points of disagreement between Turkey and the U.S.

Today Turkey is faced with increasing terror activities within its borders, along with a massive refugee influx stemming from the region, which is prompting more insistent calls for an intervention to help stabilize the region.

According to the official, who is directly quoted below, Turkey's military action had been delayed by three factors:

U.S. government: In our discussions with U.S. officials last year, it became clear that Washington didn't believe Turkey's plan to be feasible. Their basic argument was that the number of moderate rebels were simply not enough to perform the task of liberating Jarablus and other parts of Northern Syria.

Resistance from the Turkish military: Certain commanders within the Turkish military worked hard to stall Turkey's plan to move against Daesh. Time and again, they came up with excuses, such as a lack of military capability, which made it impossible for the government to move forward. Since the plan heavily relied on the special forces, Semih Terzi, the special ops commander who was shot dead during the failed coup attempt, was one of the prominent individuals who was in a position to stall the process. The liberation of Jarablus by the Turkish military and the Free Syrian Army is obvious proof that our troops were always up to the task.

Crisis with Russia: After the downing of a Russian jet in November 2015, it became practically impossible to implement our plans due to a lack of air cover. It wasn't until the recent rapprochement with Russia, in this sense, that the ground incursion could practically go forward.

The official added that Gülen-linked officers' opposition to the plans was also of key importance in delaying the ground operation, at least up until the crisis with Russia.

"What I can say is that a number of the staunchest opponents to military action ended up being the ones to partake in the coup attempt and were identified via the Bylock intercepts" the official added, referring to the encrypted messaging application used by putschist soldiers on July 15.