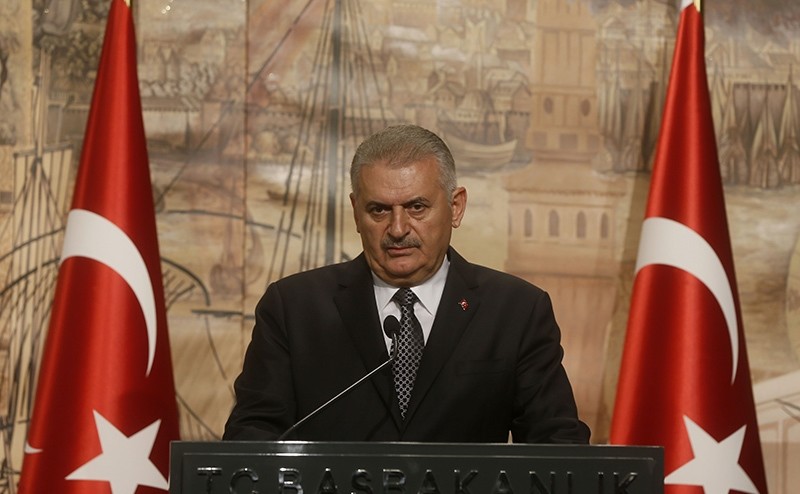 Speaking at a news conference in Istanbul alongside his Bulgarian counterpart Boyko Borissov, Yıldırım said: "No terrorist organization can take Turkey hostage."

His remarks came hours after a PKK attack in the southeastern Turkish province of Şırnak near Syrian border which killed 11 police officers, in addition to other recent high-profile attacks.

"Our citizens should understand and know that we are waging all-out war on all terrorist organizations," he added.

Yıldırım also said Turkey "will cause the collapse of the terrorist organization [PKK] that caused trouble" to the country.

"As Gazi [Republic founder Mustafa Kemal Atatürk] said during the War of Independence, 'Either independence or death'," said Yildirim. "We will give the necessary response to these villains who targeted the fellowship and unity of 79 million people."

At least 11 police officers were killed Friday when PKK terrorists detonated a car bomb near a police checkpoint in the southeastern Turkish province of Şırnak, the regional governor's office said.

The prime minister also said the military's current Operation Euphrates Shield around the city of Jarablus, northern Syria will continue until "Daesh and all other terror elements are cleared from the area."

"Since the beginning we have supported Syria's territorial integrity. The aim of these terrorist organizations is division in both Turkey and Syria," he added.

He said the Free Syrian Army is clearing Daesh terrorists from the region.

"Our soldiers are giving them logistical support," he added and continued by saying that Turkish soldiers are ensuring the safety of both people and the border.

Turkey's border towns have frequently been targeted by rocket attacks from Daesh terrorists in Syria.

On August 24, the Turkish military launched a cross-border operation named "Euphrates Shield" along with the U.S.-led coalition in Syria's northern border city of Jarablus to clear the area from the Daesh terror organization.

Operations of Turkish Armed Forces, which has been actively fighting Daesh, have significantly contributed to ongoing efforts of U.S.-backed international coalition against the terror group.