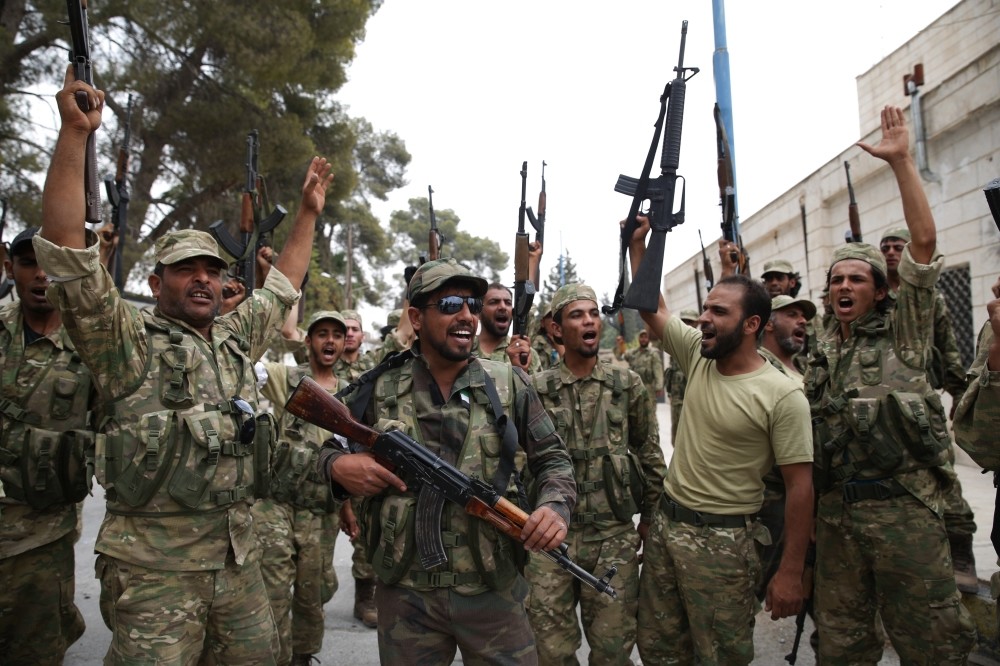 Following the successful Jarablus operation by the Turkey-backed FSA, Syrian people review their hopes of cleansing DAESH from the rest of the area, with the help of the opposition group

On Wednesday after much deliberation and warnings from Ankara, Turkey embarked on an extensive cross-border operation with the Free Syrian Army (FSA) to eliminate a threat from DAESH and prevent the People's Protection Units (YPG), the armed wing of the PKK's Syrian affiliate Democratic Union Party (PYD), who dream of creating an independent state. Collaboration of the Turkish military and the FSA has been the hope of the Syrian people in combatting DAESH. The Turkish state has warned repeatedly that they would not allow any group to establish a separatist state along the Turkish-Syrian border. When Ankara's urging that the U.S.-led coalition support the FSA more directly went unheeded, Turkey decided to take matters into their own hands. The Syrian Arabs and Turkmen who largely constitute the FSA received strong backing from the Turkish military in the Euphrates Shield operation. Turkish air and ground support, together with the FSA, prevailed in the operation, seizing full control of the DAESH-held town of Jarablus in less than a day. Jarablus is critical for Turkey, as Ankara has repeatedly asserted that liberating the city from DAESH terrorists would enable the coalition to establish a buffer zone in the area which would stop the influx of new refugees coming from other regions across Syria.

Ankara sees the PYD and its armed wing, the YPG, as eager to control Jarablus, a key city which would allow the terrorist group to connect their cantons from the west and the east to establish a "PYD corridor."

The PYD leader Salih Muslim wrote a message on his Twitter account early on Wednesday that reveals that the main aim of the terrorist organization has never been to fight DAESH. Dismayed by Turkey's entry into the northern Syria to fight DAESH, he said that the Turkish army would be defeated in Syria.

Although the PYD has other plans for northern Syria, Turkey's aim seems obvious. The aim of the Euphrates Shield operation in Syria is to clear DAESH from Turkey's southern border, Foreign Minister Mevlüt Çavusoğlu said on Wednesday.

Ankara will not stop at merely clearing DAESH from the southern border. Prime Minister Binali Yıldırım said on Wednesday that the operation led by Turkey to liberate the DAESH-held northern Syrian town of Jarablus will continue until YPG elements retreat to the east bank of the Euphrates.

LIBERATING AL-BAB NEXT OBJECTIVE OF FSA

DAESH has retreated to al-Bab, and it remains to be seen whether the FSA will continue their advance. A commander from the FSA faction Faylaq al-Sham said, "DAESH fighters have withdrawn from several villages on the outskirts of Jarablus and are heading south towards the city of al-Bab."

Erem Şentürk, editor-in-chief of the Turkish daily Diriliş Postası, told Daily Sabah: "The FSA will definitely march towards al-Bab. The question is whether Turkey will back the opposition fighters as they did in Jarablus. The answer should definitely be yes."

Al-Bab is strategic, because the town lies between Manbij and Aleppo. If the PYD seizes control of the town, the terrorist organization will be able to connect their cantons to Afrin.

Şentürk explained why the FSA must liberate al-Bab from DAESH, before the PYD does. "Al-Bab is more important than Jarablus and Mare, because it is located between Tal-Rifat and Manbij. If the PKK [PYD] seizes Al-Bab, they will be able to connect their cantons and reach the Mediterranean." He added that the liberation of al-Bab from DAESH will deal a heavy blow to the terrorist organization, as their strategic operations are managed from there. "If al-Bab is taken, DAESH would be damaged just as if it lost Raqqa."

The FSA fighters drove jubilantly in Jarablus after liberating the city from DAESH. They shouted and sang cheers at victory over the deadly terrorist group.

Şentürk considered it likely that the FSA could see a growth in recruitment. "The number of FSA fighters is likely to spike. The FSA does not use group names. They say their victory has come thanks to the Syrian people," adding that the Jarablus victory boosted morale. "The FSA will go on to liberate Al-Bab with new recruitments. The morale within the FSA is high."

The world will see whether Turkey will back the FSA towards al-Bab. Şentürk thinks that Turkey will continue to act in Syria until the YPG wing of the PKK's Syrian-affiliate PYD retreats to Tishrin.

Meanwhile, "Turkey is prepared to stay in Syria for as long as it takes to destroy ISIL", U.S. Vice President Joe Biden said during a visit to Sweden a day after meeting Erdoğan.
RELATED TOPICS