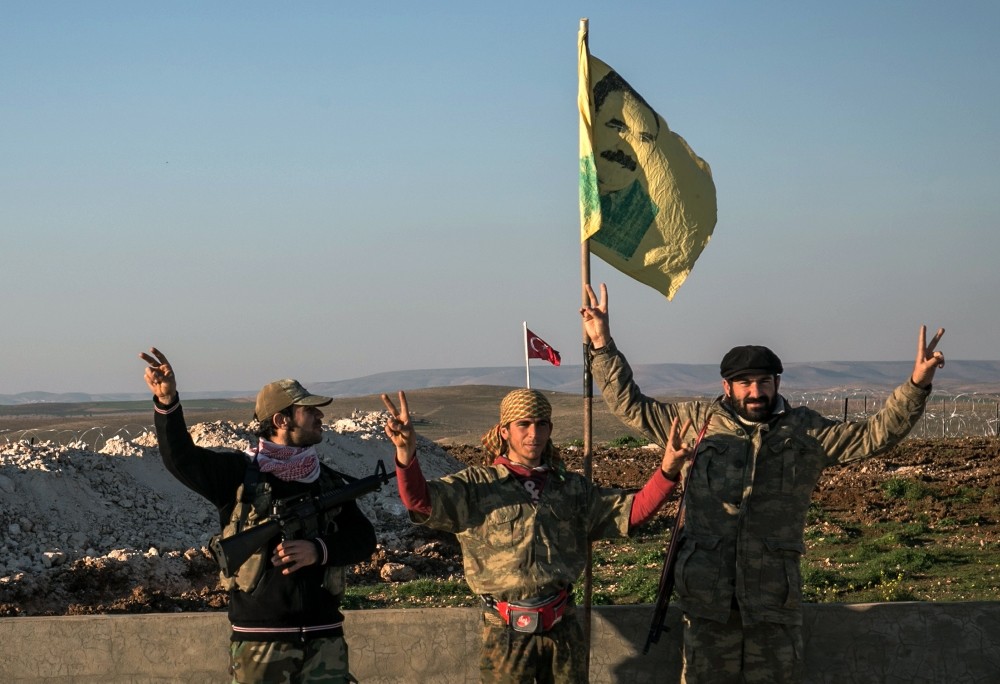 Duran Kalkan, a leader of the PKK terrorist organization, vowed to defend northern Syria and send additional militants if the Turkey-backed Free Syrian Army (FSA) starts an offensive on Manbij. Despite the U.S. claiming that the Democratic Union Party (PYD) and its armed wing, the People's Protection Units (YPG), are not directly linked to the PKK, Kalkan openly expressed support for the Syrian wing. "[Turkey entering Syria] is a serious matter," Kalkan said, adding that the PKK is ready to provide support to the PYD if needed. As the situation in northern Syria gets more complex with the FSA marching toward Manbij and the YPG vowing to defend the town with the help of the PKK, the U.S. still keeps silent over YPG attacks on the Turkish military. A Turkish tank was hit by the YPG last week, leading to the death of a Turkish soldier. NATO and Washington could not condemn the attack, which was interpreted by many as a sign of lack of solidarity.

Meanwhile, the YPG appears to be reinforcing the Syrian city of Manbij with weapons and personnel, regional security sources told Reuters on Monday. Manbij, a key city located on the west bank of the Euphrates River, was captured by the YPG-dominated Syrian Democratic Forces (SDF) alliance in a U.S.-backed offensive this month against DAESH. Last week, after much deliberation and warnings from Ankara, Turkey embarked on an extensive cross-border operation with the FSA to eliminate a threat from DAESH and prevent the YPG, which dreams of creating an independent state.

The collaboration between the Turkish military and the FSA has been the hope of the Syrian people in combating DAESH.

The Turkish state has warned repeatedly that it will not allow any group to establish a separatist state along the Turkish-Syrian border.

The Turkey-backed FSA's possible offensive on Manbij is considered to be a threat by the PYD.

U.S. officials in a Senate panel in the U.S. congress in April admitted that there were links between the PKK and the PYD and its armed-wing, the YPG.

Secretary of Defense Ashton Carter had answered in the affirmative when asked by Sen. Lindsey Graham whether the PYD and the YPG, are aligned with the PKK terrorist organization.

Admitting the link between the PKK and PYD, Carter acknowledged that the PKK is a designated terrorist group by the U.S. and Turkey but denied Ankara is upset by U.S. air and equipment support to the militant group's offshoot in Syria.

Pro-PKK Peoples' Democratic Party (HDP) Co-Chair Figen Yüksekdağ threatened Turkey, saying that an offensive on Manbij will get a response, which according to her may lead to a civil war in the region.

Yüksekdağ asserted that a possible offensive by the Turkey-backed FSA on Manbij may create a chaotic environment similar to the Oct. 6-8 events.

The HDP co-chairs called for an uprising on Oct. 6-8, 2014. More than 50 citizens were killed in the incidents. Among the victims was Yasin Börü, who was only 17 years old. Börü was thrown from a third-floor window, stabbed, burned and then his body was run over with a car.

On July 19, 2015, Figen Yüksekdağ had said, "We lean our back on the YPJ, YPG and PYD and we do not see any harm in mentioning and defending it," in which she meant the HDP relies on the protection of the aforementioned groups.
Last Update: February 02, 2020 13:28