Jarablus' children who fled DAESH united with their families 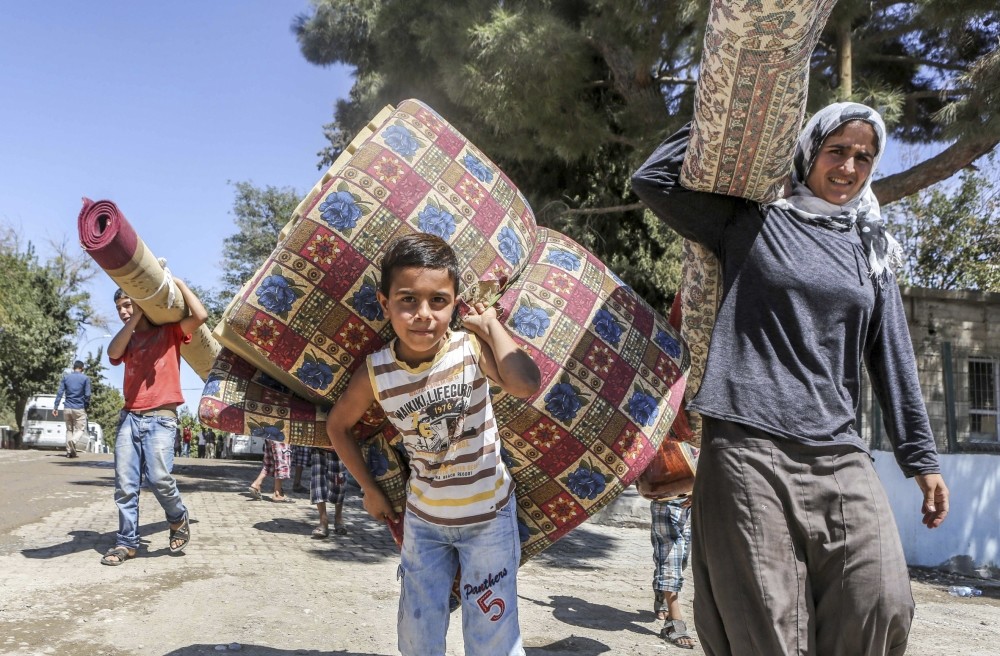 In the first wave of resettlement, some 312 Syrians, including children, who had fled DAESH rule, passed through the Karkamış border gate to return home to Jarablus, which was liberated by the Turkey-backed FSA

Syrians currently taking shelter in Turkey's border towns and refugee camps have mixed feelings. Having fled a bloody war, violence and bombs years ago, Syrian refugees have found comfort in Turkey. Now that Turkey has started to clear its borders and a southern area in northern Syria, Syrians are gradually returning home. Some 312 Syrians passed through the Karkamış border gate on Wednesday to return home to the north Syrian town of Jarablus, which was liberated by the Turkish military in cooperation with the Free Syrian Army (FSA) as part of Operation Euphrates Shield. Syrians continued to return to Syria from the Karkamış border Thursday. Daily Sabah talked to teenagers who had to flee to Turkey because of DAESH.

Scores of teenagers aged between 14 to 16 had to leave their hometown and families on their own years ago because they did not want to be recruited by DAESH. They are now returning to their hometowns for an emotional reunion.

"DAESH militants came to our house and said that I had to join them when I was 14. I simply did not want to," 16-year-old Ali Berkel from Jarablus said. Ali had no choice but to leave his mother and father at the age of 14. He made his way to Turkey to start a new but difficult life.

Fifteen-year-old Hassan, also from Jarablus, was a victim of DAESH's forceful recruitment methods as well. He talked about how he had to leave home at the age of 13. "I asked my mother what I could do. She told me that I should flee to Turkey rather than join DAESH," he recalled.

Similar to the PKK, Democratic Union Party (PYD) and People's Protection Units (YPG) terrorist groups, DAESH also recruits children as fighters. Even though the children and their families do not consent to it, the aforementioned terrorist groups continue their acts.

DAESH militants wanted 16-year-old İbrahim as well. İbrahim, Ali and Hasan know each other very well. They grew up in the same neighborhood and played games together for years. DAESH wanted them as warriors when they were only kids. "I never wanted to have anything to do with DAESH. They slaughter people," İbrahim said, recalling how he had to flee as well.

DAESH does not only slaughter people, but tears apart fa

milies. Hundreds, maybe thousands of children have fled Syria without their families.

Ali talked about how he earned his living and continued to survive in Turkey with nobody around him at the age of 14. "I drove to Ankara after I got to Turkey. I had to find a job quickly. After a while, me and five of my friends just like me rented a flat," he said.

Hassan also shared the same fate. He said that he had to live in a small flat in the capital to survive. "I used to work in Ankara at a place that sells windows. I would earn around TL 600 ($200) per month. Thank god I survived," he said.

Hassan, Ali and İbrahim now want to leave these memories behind. They drove to the Karkamış district of the southern Gaziantep province at once after hearing the news that the border will be opened. "We jumped up and down in joy when we heard it," İbrahim said, adding that they thought they would never see their families again.

"I'm very excited. I will get to see my mother and father years after I left home," Ali said, thanking God that his family is still alive.

As hundreds of Syrians have already started to return home after Jarablus was liberated, additional thousands of refugees are waiting for the establishment of a safe zone in northern Syria.

With northern Syria partly free of the DAESH terrorist group, Turkey's suggestion to establish a safe zone in the area rose to the surface again. Even though Turkey has long made the aforementioned suggestion, the U.S. and the coalition to defeat DAESH has turned a deaf ear. However, the refugees taking shelter in Turkey do not think so.

Daily Sabah recently talked to dozens of refugees in the Elbeyli refugee camp who voiced their request for a safe zone. Many of them said that they hailed Operation Euphrates Shield because it "helped to clean terrorists from our homeland."

The Turkish army launched the Operation Euphrates Shield with the FSA on Aug. 24 to secure Turkey's southern border with Syria. In less than a day, the Turkey-backed FSA liberated Jarablus and continued marching from the east and the west. On Sunday, the FSA secured the entirety of northern Syria. Since then the opposition army has been advancing towards the south.

The FSA set its sights on the Syrian town of al-Bab, which is currently under DAESH control, because the town lies between Manbij and Aleppo.

Seizing al-Bab is vital for Turkey. Even though the FSA has secured the southern border after pushing DAESH southwards, the Turkish military controls only around 10 kilometers southwards. To make sure that Turkey is free of DAESH shelling and terror threats, Turkey wants the FSA to fight until al-Bab is captured.
RELATED TOPICS