If you want to fight Daish, partner with Turkey not YPG terrorists, President Erdoğan says 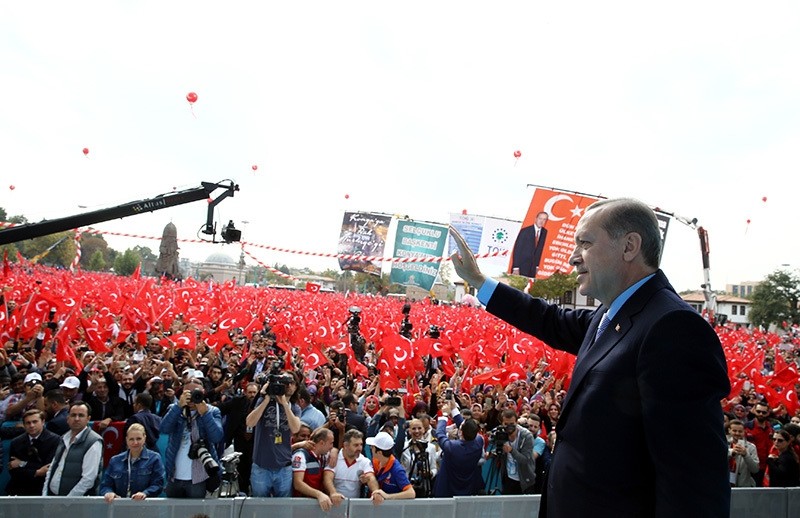 President Recep Tayyip Erdoğan criticized the U.S.-led coalition yesterday for partnering with the PKK's Syrian offshoot the Democratic Union Party (PYD) and its armed wing the People's Protection Units (YPG) in the fight against Daish.

Speaking at a series of inaugurations in the Central Anatolian province of Konya, Erdoğan called on the 63-member coalition to stop fighting Daish by partnering with PYD/YPG terrorists.

President Erdoğan reiterated remarks made by the Obama administration and U.S. Democratic presidential hopeful Hillary Clinton on arming the PYD in northern Syria to defeat Daish.

"They say, 'we will continue arming the PYD and YPG in Syria.' At what time do they say this? During presidential election campaigns. What a shame. Is your partner in NATO the PYD/YPG or is it Turkey? If it is Turkey, then you must come to the table with us."

Touching on Clinton's comments, the president said: "I find Mrs. Clinton's remarks about arming the YPG/PYD very unfortunate, I chalk it up to political inexperience," Erdoğan said on Wednesday.

Commenting on recent criticism from the Iraqi government on the Turkish military presence at the Bashiqa camp near Mosul, President Erdoğan said that Turkey sent the troops at the demand of the Iraqi central government.

"Some tell us to withdraw from Bashiqa but they are the same ones who invited us to Bashiqa in the first place. I am sorry but we have cognates there and they ask us to help them," President Erdoğan said.

On Dec. 4 of last year,150 Turkish soldiers equipped with heavy weapons arrived on the outskirts of Daish-held Mosul province in Northern Iraq to train forces, nearly 10 months before Iraq demanded the withdrawal of Turkish soldiers. Iraq has given Turkey an ultimatum to withdraw its forces or face "all available options."

Turkey said 150 soldiers and up to 25 tanks are stationed at Bashiqa to protect servicemen training Iraqi volunteers, including Arab and Turkmen Sunnis, as well as Kurdish peshmerga forces, which fight Daish and are not assigned to combat duties.

Meanwhile, Erdoğan also reiterated that Ankara is determined to join the coalition forces in the upcoming offensive in Mosul to liberate the town from the Daish terror group, stressing that the PKK should not be included in the offensive.

"If the coalition forces do not want Turkey in the operation, then we have a plan B. If that doesn't work we will move on to our next plan," the president added.

Turkey argues that unless regional ethnic and religious sensitivities are taken into consideration, the clearance of Daish from Mosul will not ensure that peace and stability will be established in the region due to new Shiite-Sunni, Turkmen-Kurdish tensions. The Turkish government has proposed that the operation be conducted through supporting local forces in Mosul, rather than relying on fighters brought in by the central government from the outside or the PKK terrorists, who threaten Iraq's territorial integrity.