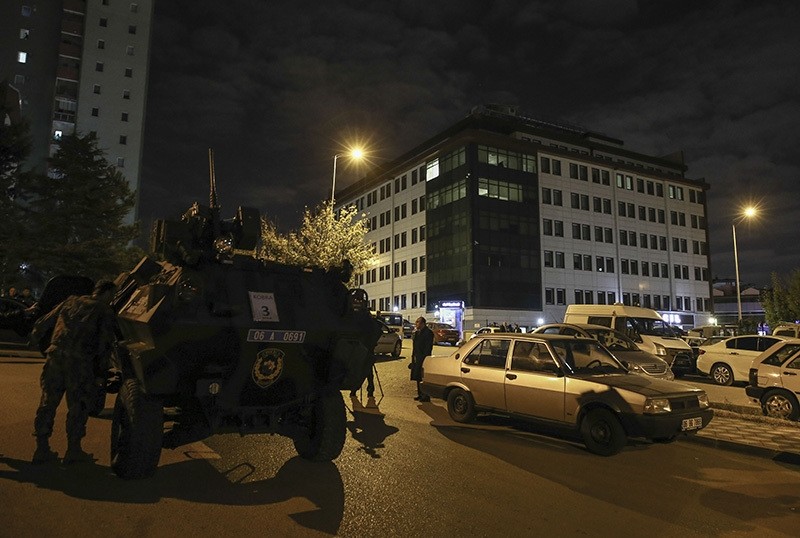 A Daesh member clashing with police in the capital Ankara was killed late Tuesday, authorities said. The suspect, identified as Turkish national Ahmet B., was planning to carry out a suicide bombing in an "important" location in the capital, the city's governor announced.

Ahmet B. opened fire on officers as an anti-terror squad raided his ninth-floor home in the middle class neighborhood of Eryaman and was killed in the shootout. Police found a large cache of explosives in the rental residence.

Ankara's Governor Ercan Topaca told reporters that the 24-year-old suspect did reconnaissance in Anıtkabir, the mausoleum of Atatürk, founder of Republic of Turkey and old parliament building, two buildings popular among Turkish tourists, according to photos found in his possession. The governor said the police found dynamite, ammonium nitrate used in bomb making, TNT compound and 2 kilos of metal pieces used to increase the sphere of impact in the explosives. The governor said they suspected Ahmet B. was planning to carry out the bombing on Republic Day on Oct. 29 or on Nov. 10, the day commemorating the death of Atatürk, two occasions where Anıtkabir is packed with crowds every year.

Security experts say Daesh, whose presence in Turkey's neighbor Syria has shrunk thanks to Turkey-backed Syrian rebels' operations to capture their strongholds, look to step up its attacks in Turkey. Last week, three police officers were killed when a suicide bomber blew himself up during an anti-terror raid in the southeastern city of Gaziantep.

The operation in cooperation with the FSA on Aug. 24 was launched to clear Daesh terrorists and liberate northern Syrian towns from the terrorist group, while preventing PKK's Syrian wing PYD / YPG to replace Daesh in these areas. In less than a day, the FSA, backed by the Turkish Armed Forces (TSK) liberated Syria's Jarablus and continued marching from the east and the west.

So far, the Turkish-backed FSA have cleared over a 1,200 square kilometer-area on the Turkish border.

Recently, Turkey has participated another counter-terror operation against Daesh terrorist group which was launched by coalition to clear the Mosul-based Iraqi towns from terrorists.