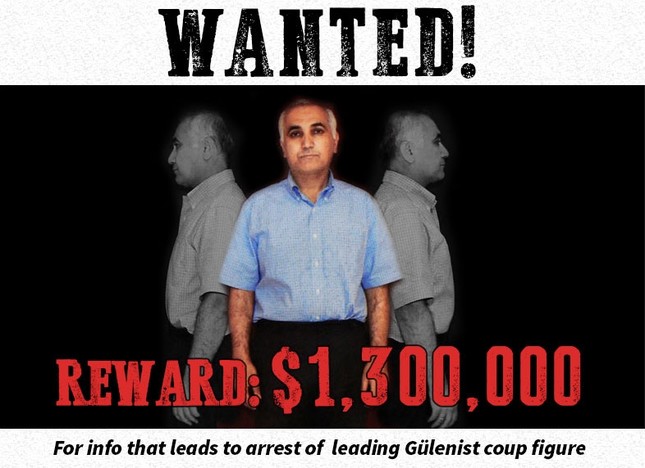 Turkey put senior figures from the Gülenist Terror Group (FETÖ) onto a most wanted list of terrorists in an effort to locate the fugitives after the cult's coup attempt on July 15. Authorities are offering up to TL 4 million($1.3 million) for tip-offs for the capture of Adil Öksüz, one of the alleged masterminds of the putsch.

Authorities seek to speed up the process to capture senior figures of FETÖ accused of conducting the July 15 putsch attempt amid a long sheet of other crimes. The list for the most wanted terrorists prepared by the Interior Ministry offers up to TL 4 million for eight FETÖ members, while lesser awards were announced for 29 others as well.

Adil Öksüz, a top Gülenist figure who is the prime suspect in the plot to take over the state in the coup attempt, is in the "red" category of the list where terror suspects with the highest awards for their capture are included. Öksüz, a theology lecturer by profession, is the alleged "imam" or point man, for FETÖ's members in the Turkish Air Forces and is accused of masterminding the coup with Gülenist generals.

Fethullah Gülen, the U.S.-based leader of the terror cult was already included on the list of the most wanted, where others wanted by authorities range from leaders of the PKK terrorist group to militants of Daesh and the Revolutionary People's Liberation Party-Front (DHKP-C) terrorist group.

Amid increasing terror threats, the Interior Ministry has drafted a list of the most wanted in 2015 to encourage public assistance to capture the terror suspect and introduced five color categories where separate monetary prizes are offered for low-level and high-level members of terrorist groups in different categories. The most wanted lists are published and updated regularly online for citizens who want to report the whereabouts of wanted terrorists. The ministry says more than TL 4.6 million was awarded to citizens so far for helping in the capture of terrorists in different categories, while 27 terrorists on the list were captured dead.

Öksüz was detained after the foiled coup attempt at Akıncı Air Base in Ankara, which the coup plotters attempted to use as its headquarters.

He was among three civilians found in and around the base after the coup attempt was quelled, but in a controversial verdict, was released by judges only hours after his detention. Authorities have launched an inquiry into the possible links of judges releasing Öksüz to FETÖ. He remains at large and is believed to have fled abroad. Yeni Şafak, a Turkish daily, claimed yesterday that Öksüz was brought to İncirlik air base in southern Turkey where U.S. troops are deployed and was "flown abroad" by a plane leaving the base, following the coup attempt.

Reports say that Öksüz has been working with and received orders regarding FETÖ's military activity from Mustafa Özcan, who is known to be the country-wide leader of FETÖ.

Gülenists, who already tried to overthrow the government in the guise of two graft probes by Gülenist judges, prosecutors and police officers in 2013, face multiple investigations after the foiled putsch attempt in July. Turkey seeks the extradition of Gülen from the U.S. while it calls other countries to deport Gülenist fugitives. Although thousands of Gülenists were detained and arrested following the putsch attempt staved off thanks to public resistance, a large number, mostly senior figures of FETÖ, are believed to have fled abroad immediately after the coup attempt or shortly before it happened.

Although senior cadres of the terror cult are included in the list of the most wanted, they are mainly people not widely known by the public thanks to FETÖ's strict code of secrecy. Like Öksüz, other suspects maintain a low profile but they are accused of controlling and planning illegal activities of FETÖ and its money laundering schemes. The most known suspects on the wanted list are Zekeriya Öz, a media-savvy prosecutor who was behind a series of high-profile trials in recent years that later turned out to be based on forged evidence. Öz fled Georgia last year after he was accused of membership of the terror cult, which allegedly used cases handled by Öz to imprison their foes on trumped-up charges. Akın İpek, a prominent tycoon who ran a business conglomerate funneling money to FETÖ is another high-profile suspect in the most wanted list.

In related news, Osman Özsoy, a FETÖ suspect with an arrest warrant, was sighted in Toronto, Canada, Anadolu Agency reported. Özsoy, a professor, has made the headlines when his statements in support of a coup one month before the putsch attempt surfaced. Özsoy, known for its support of the terror cult has foretold the coup attempt according to the prosecutors who issued an arrest warrant for him both for his words and his remarks calling people not to resist a coup attempt. In photos published on the media outlets, Özsoy is seen having lunch in a Turkish restaurant with two others. Canada and the U.S. are known as favorite destinations of Gülenist figures escaping investigations in Turkey. Apart from Fethullah Gülen who resides in Pennsylvania, other prominent names of the terror cult wanted in Turkey are known to be residing in the U.S. Tuncay Opçin and Emrullah Uslu, two terror suspects facing the same charges as Özsoy, were sighted in the U.S. earlier this month.

Yesterday, authorities also captured three FETÖ members trying to flee into Greece from the country's Aegean shores. Three men were found among some 60 Syrian migrants who were planning to travel to the nearby Greek island of Samos from the coast of Kuşadası in western Turkey. The three were identified as Ahmet Sinan Demirsoy, Mehmet Pehlivan and Ahmet Uygur and had arrest warrants by a court in the southern province of Hatay on charges of financing the terrorist group. After the coup attempt, several soldiers involved in the putsch, had escaped to Greece aboard a military helicopter. Athens promised to extradite them to Turkey and a legal process is still underway. Greece's proximity to the Turkish shores make it a favorable destination both for migrants and now, apparently for FETÖ members. Several members of the terror cult were caught before they made it to Greece following the coup attempt in the past two months.