Turkey-backed FSA to clear Daesh from al-Bab, Raqqa and YPG from Manbij 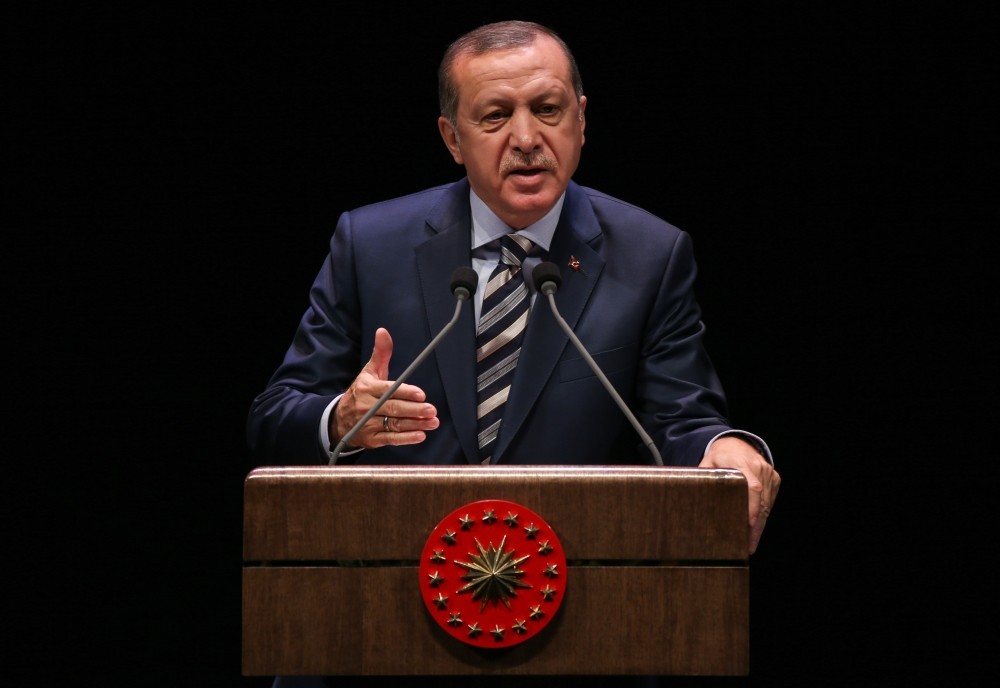 Drawing the new route of Operation Euphrates Shield in Syria, President Erdoğan said, "Now we are on the way to al-Bab. Because al-Bab is an important headquarters [for Daesh]. They will leave al-Bab and the campaign will go on. We will head to Manbij and Raqqa."

Ankara has been pushing southwards, supporting FSA forces as part of the Operation Euphrates Shield launched on Aug. 24, to now clear al-Bab from Daesh terrorists and form a terror-free zone of 5,000 square meters comprising of the towns of al-Bab, al-Rai, Azaz, Jarablus and Manbij. The terror-free corridor will ensure security for Turkey's southern border with Syria, while providing a safe shelter for locals in the region, which would stop the mass influx of refugees coming into Turkey.

Operation Euphrates Shield has seen both the Daesh and PKK/PYD terrorist groups targeted by the opposition Free Syrian Army plus Turkish tanks, artillery and aircraft.

Turkey has recently announced a new approach to its anti-terror strategy, saying it will fight terror groups at their roots, before they are able to carry out attacks within Turkey's borders. Ankara says that it has particularly employed such strategy to move from an understanding where it waits for the terror groups to act, to one that cuts the groups maneuvering ability prior to their attacks against the state. As such, it argues that Daesh, as well as PKK terror threats, must be eliminated from Syria and Iraq before they are able to move into Turkey.

"We will go on this [Operation Euphrates Shield] campaign in Syria and Iraq, and now in Kirkuk, Mosul, Tal Afar and Sinjar. Why? Sinjar is about to be the new Qandil [for the PKK]. Thus, we cannot allow this to happen in Sinjar, because there is the PKK there."

Iraq's Qandil Mountain has served as a headquarters for the PKK in northern Iraq.

'YPG not needed to clear Daesh from Raqqa'

Meanwhile, Erdoğan said that he held a phone call with U.S. President Barrack Obama last night and said he had shared these steps with him.

"We don't need the PYD-YPG terror organizations. The PYD and PKK are all the same in Raqqa," Erdoğan told Obama. "We said 'Let's clear Daesh from Raqqa with you. We can deal with it together.' We have this power."

Ankara has repeatedly argued that the YPG forces out the Arab and Turkmen locals from areas cleared of Daesh, in an aim to change the demographics of the region and assume full control over the captured areas. Both President Erdoğan and Prime Minister Binali Yıldırım have repeatedly voiced concern over such adjustments, saying the fight against Daesh should be executed through supporting local forces. Meanwhile, the YPG presence has become a matter of political friction between Ankara and Washington. Ankara argues that U.S. support to the Syrian Democratic Forces (SDF), predominantly led by the YPG, is eventually transferred to the PKK and ultimately used against Turkey. The U.S. regards the YPG as an ally in its fight against Daesh, as Turkey considers it a terrorist organization due to its links to the PKK, which has killed over 40,000 citizens in a three-decade insurgency in Turkey.

Despite concerns and disagreements between Ankara and Washington, U.S. Army Lieutenant General Stephen Townsend said Wednesday that YPG militants will be a part of the forces to isolate the so-called capital of the Daesh terrorist group, Raqqa, in northern Syria. "The only force that is capable on any near term timeline are the Syrian Democratic Forces, of which the YPG are a significant portion," Townsend said in a news briefing. "We'll move soon to isolate Raqqa with the forces that are ready to go."

The PKK and its Syrian offshoot, the PYD, are both listed as terrorist groups by Turkey, although the U.S. and EU only view the PKK as a terrorist organization. A statement was released late Wednesday about the phone call saying both presidents also expressed support for the territorial integrity and political independence of Iraq and that President Erdoğan highlighted that the ongoing operations in Mosul to clear Daesh terrorists from the Iraqi city should be conducted with the utmost sensitivity.

On the other hand, according to Kurdistan24, an Iraqi news source, a group of Arab tribes in Raqqa province also said in a joint statement on Tuesday that the YPG forcibly displaces Arabs in Tal Abyad, under the pretext of fighting Daesh.

The group of tribes also rejects the idea of including the YPG in the operation on Raqqa. "No YPG fighter may enter the Arab areas where our fighters are present," the Collective of Raqqa Tribes said in the beginning of the statement.