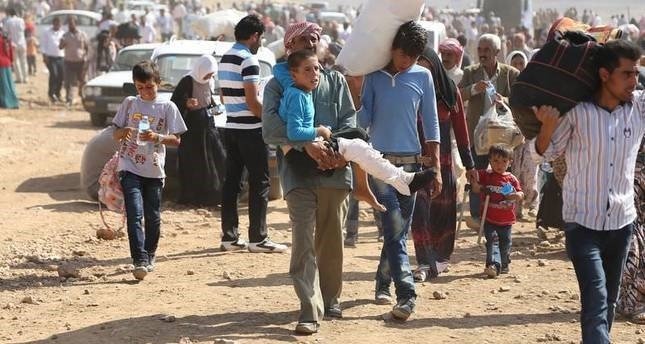 The PYD's oppressive attitude in Syria is forcing Kurds to leave the region, head of the Kurdish National Council in Syria told Turkey's TRT World channel on Sunday.

Ibrahim Biro, who heads the Kurdish National Council in Syria and is the secretary-general of the Union Kurdish Party in Syria, said: "PYD is a totalitarian and Stalinist party. It does not share power with other Kurdish parties.

He emphasized that PYD was not bringing peace to the region. "I do not think the PYD is targeting to establish an independent state," he said.

He said all Kurdish groups were demanding a federal structure in Syria and predicted that the U.S. would change its position on PYD after the fight against Daesh ends.

"After the liberation of Mosul and Raqqa, there will be no need to fight Daesh, and then the U.S. would have a different attitude towards PYD," he said.

Although the PKK is listed as a terrorist group by Turkey, the U.S. and EU, only Turkey considers the PYD a terrorist organization and has fought to prevent it from linking territories in western and eastern Syria that would give the PKK/PYD control of most of Turkey's southern border.

Both the PKK and the PYD and its armed wing YPG function under the umbrella network of the Kurdish Communities Union (KCK), which is led by the imprisoned terrorist leader Abdullah Öcalan. While Saleh Muslim leads the PYD, Cemil Bayık is the lead figure for the PKK. Although the PKK was headquartered in Syria until 1998, currently, the PKK is controlled from headquarters in Northern Iraq's Qandil Mountains.

The KCK terrorist groups function under the names of the PKK in Turkey, the PÇDK in Iraq, the PYD in Syria and PJAK in Iran. The PKK renewed its violent campaign in Turkey after a Daesh attack on July 20 in the southeastern district of Suruç which left a dozen people killed. The subsequent PKK-linked murder of two Turkish police officers at their homes sparked a new wave of conflict in the country, which saw a short-lived calm period during reconciliation process talks launched in 2013 between the government and the PKK.