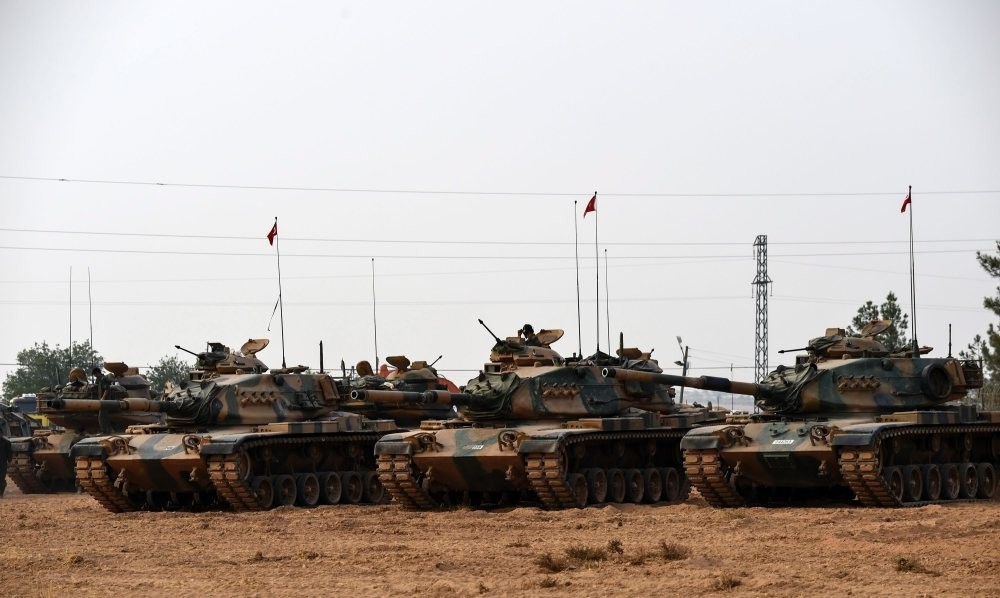 Turkish Army tanks standing in the southern region of Gaziantep, on August 25, 2016, just before the start of Operation Euphrates Shield, to clear Turkeyu2019s southern border of Daesh.
by Merve Aydoğan Dec 20, 2016 12:00 am

After it was revealed by intelligence reports that both the perpetrators of the recent Kayseri and Istanbul bomb-laden car attack had received training at PYD camps in Kobani, PM Yıldırım gave signals of new operation on the Syrian side of Turkey's southern border held by PYD terrorists

A Euphrates Shield-like military operation on Turkey's southern border has became a widely discussed matter after intelligence reports revealed that the perpetrators of recent Kayseri and Istanbul bombings received training at camps run by the PKK's Syrian offshoot the Democratic Union Party (PYD) in Kobani. They also entered the country from Syria illegally. Prime Minister Binali Yıldırım said recently that "Turkey had limited the Daesh threat through Operation Euphrates Shield. We will conduct similar operations on our southern border." Coupled with the Turkish Armed Forces (TSK) deployment of additional military vehicles, including tanks and tank recovery vehicles to Turkey's southern border with Iraq, PM Yıldırım's comments have been understood as a move which would mean an expansion of cross-border operation into northern Iraq, to fight PKK targets, including Qandil Mountains and Sinjar, in addition to expansion of the Operation Euphrates Shield into other PYD-held regions in Syria.

The discussions on a possible operation on Turkey's southern border came following Prime Minister Yıldırım's remarks over the weekend in Kahramanmaraş shortly after Saturday's terrorist attack by the PKK in the central Anatolian city of Kayseri, which killed 14 soldiers and injured 55 more, 12 of whom are said to have suffered serious injuries. "Turkey is currently under a multi-dimensional terror threat, not only by separatist terror groups. Though Daesh, the Revolutionary People's Liberation Party-front (DHKP-C), PYD, the People's Protection Units (YPG) and the Gulenist Terror Group (FETÖ) seem to be different, their eventual goal is always the same," Yıldırım said and added "however, just Operation Euphrates Shield by itself has limited the Daesh threat on our Syrian border and diminished it. We will conduct similar efforts throughout our entire southern border."

Commenting on the matter, retired military officer and security specialist Abdullah Ağar underlined that Turkey is waiting for the right time for the operation as he said it may be directly conducted by the TSK. As Yıldırım stressed in his recent remarks that the weapons given to the PYD were obtained by the PKK, Ağar told Daily Sabah that Turkey is preparing "an asymmetric and/or linear" action in one or more areas on the southern border.

"There are two fundamental areas in Syria, with one being the Afrin region and the other the east of the Euphrates. While the PKK's existence is evident in areas of Ayn al-Arab, Tal Abyad, Qamishli and Hassakeh, the terrorist group [PKK] had its camps on the other border region right across from Turkey's Şırnak province around Sina and Haftanin along with across the Hakkari province called the Zap and Harkuk region and of course there is Qandil," Ağar added.

He continued by stressing that additionally the PKK terrorist group is trying to establish its existence throughout the Tal Afar and Sinjar regions while continuously threatening Turkey's regional ally, Iraq's Kurdistan Regional Government (KRG). "In this respect, Turkey may conduct an operation in one or more than one of these areas with aims to establish its influence. While this could be done in an asymmetric or linear approach, Turkey could directly or indirectly conduct the operation or even could be both," Ağar said. Though the TSK had deployed military vehicles to the Silopi district of Turkey, nearly 95 kilometers from the Iraqi city of Tal Afar with efforts to ensure readiness for all possibilities, the retired military officer and security specialist affirmed that Turkey's discussions and preparations for an operation on its southern border continues as it awaits "the right position for the operation."

Further commenting on the matter, Oytun Orhan, an expert on the Middle East at Ankara-based think tank Center for Middle Eastern Strategic Studies (ORSAM), had indicated that though Turkey generally conducts operations against the PKK, a military operation similar to Operation Euphrates Shield is unlikely. The prominent Middle East expert Orhan said that Turkey aims to eliminate all terror-affiliates prior to them reaching Turkey at the source, as part of a preventative measure. Orhan said the Silopi military deployments were significant for this matter. Underlining that a military operation similar to Operation Euphrates Shield is currently unlikely in Iraq, Orhan said. "Due to the PKK's existence in the Sinjar region, Turkey has to plan cross-border similar operations to the ones against Qandil." He said that such an operation still remains unlikely due to "Turkey not having allies to act together with in the region and not reaching a consensus with the regional actors yet."
Last Update: Dec 20, 2016 1:54 am
RELATED TOPICS