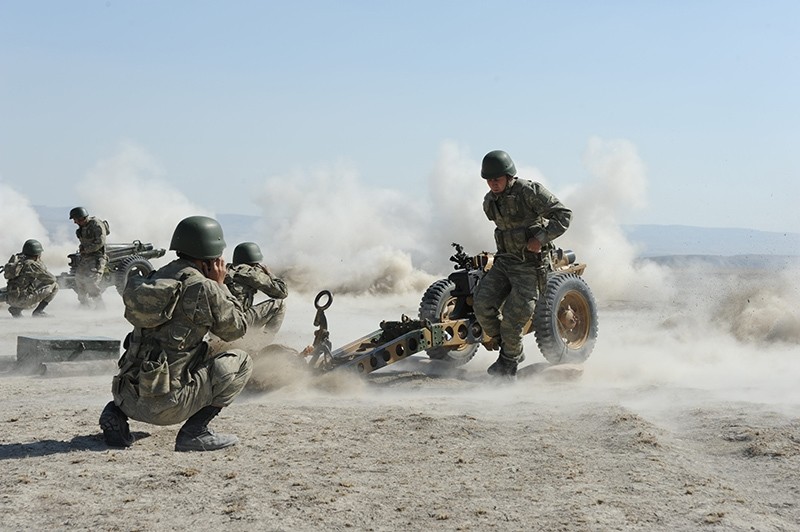 The Turkish military, as well as the Turkey-backed Free Syrian Army (FSA), has begun clearing Daesh from Syria's al-Bab after the launch of intense clashes on Wednesday in the western part of the town, particularly around the Daesh-held hospital used as a command-and-control center, and ammunition depot on Sheikh Aqeel Hill.

Military sources said Thursday Special Task Forces Units had encompassed Daesh's built-up area with heavy fire support by both air and ground forces, and 160 Daesh terrorists were killed during the operations. During the heavy bombardment, 228 Daesh targets, including armed vehicles and command buildings, were destroyed by ground forces, while 90 other targets were destroyed by air forces. The sources said that two Turkish soldiers and five FSA fighters were also killed, while 38 FSA fighters were wounded during the operation. Combined with Wednesday's losses, the numbers of casualties have risen to 16 for Turkish soldiers during the offensive on al-Bab.

Turkish military sources have reiterated that, due to the large number of civilians still living in al-Bab, the utmost caution and sensitivity should be exercised to avoid civilian casualties.

President Recep Tayyip Erdoğan offered condolences to the families of the soldiers who lost their lives during the operation and a quick recovery to the wounded. Speaking in Ankara on Thursday during an inauguration ceremony of 151 new projects by the Forestry and Water Affairs Ministry, Erdoğan said, "We have 16 martyrs, and nearly 200 Daesh terrorists have been killed there [al-Bab]. We could not wait any longer to act against those continuously posing threats to our country. We are doing what is necessary." The president added that the operation was launched after being discussed through diplomatic channels with Russia, the United States, Iraq, Iran and Gulf countries.

Meanwhile, Prime Minister Binali Yıldırım said that Turkey's counterterrorism operations are continuing both inside and outside the country, as the anti-terror measures have become part of protecting Turkey's sovereignty.

The opposition Nationalist Movement Party (MHP) Chairman Devlet Bahçeli has supported the government's cross-border operations in Syria in a statement, saying, "The deepening chaos in Syrian territory poses a significant threat to our national security. Turkey's presence in Syrian territory is to ensure its own national security. As such, destroying the sources of terror at their roots is a necessity for our country's future and independence."

The operation on al-Bab was launched as part of Operation Euphrates Shield, launched on Aug. 24, which aims to eliminate terror threats to Turkey's southern borders posed by Daesh and PKK's Syrian offshoots, the Democratic Union Party (PYD) and its armed wing, the People's Protection Units (YPG). In addition, the operation aims to establish a 5,000-square-kilometer (1,930 square mile) terror-free area in northern Syria, comprising of the towns: al-Bab, al-Rai, Azaz, Jarablus and Manbij. This would allow Syrians to seek refugee from areas of conflict, without being forced to leave their country.

Defense Minister Fikri Işık told Parliament on Thursday that a nearly 2,000-square-kilometer area has been cleared of the Daesh terror group and about 1,000 terrorists have been killed in northern Syria since the launch of Operation Euphrates Shield, and that clearing Daesh from al-Bab has begun.

Highlighting that Operation Euphrates Shield is moving forward in line with international law, Işık said: "The liberation of Jarablus, al-Rai, and Dabiq, which has a symbolic meaning for the group, is significant. An area of about 2,000-square-kilometers has been cleared off, and 225 urbanized areas have been liberated. As of today, 1,005 terrorists have been killed." Işık added that 29 mortars, 97 vehicles, 621 buildings and 61 defense positions belonging to the group have been destroyed so far.

The defense minister added that 299 PKK/PYD/YPG terrorists have also been killed during the operations, in addition to more than 20 targets associated with the terror group being destroyed.

The operation has so far liberated the strategic Daesh-held towns of Jarablus, Azaz and Dabiq, and has been nearing the town of al-Bab. The FSA has expanded its operations to al-Bab, due to its geostrategic position between the cities of Manbij and Aleppo, while aiming to liberate the city's people from the Daesh offensive. The al-Bab operation is also of particular importance for the Turkey-backed FSA due to the significant civilian support to Daesh in the town. As such, Daesh's defeat will be an important blow to the terror group before the operation expands to Daesh-held Raqqa. Daesh had also used al-Bab for the purpose of military built up.

Military sources said that Daesh has been favoring suicide bombers and suicide car-bombers amid heavy bombardments.

As part of Turkey's new approach to its anti-terror, Ankara has vowed to fight terror groups at their roots, before they are able to carry out attacks within Turkey's borders. As such, it argues that Daesh, as well as PKK terror threats, must be eliminated from Syria and Iraq before they are able to move into Turkey. Prime Minister Binali Yıldırım said recently, "Turkey has limited the Daesh threat through Operation Euphrates Shield. We will conduct similar operations on our southern border." Prime minister's remarks have been understood as a move which would mean an expansion of cross-border operations into northern Iraq, including the Qandil Mountains and Sinjar, to fight PKK targets, in addition to expansion of Operation Euphrates Shield into other PYD-held regions in Syria.