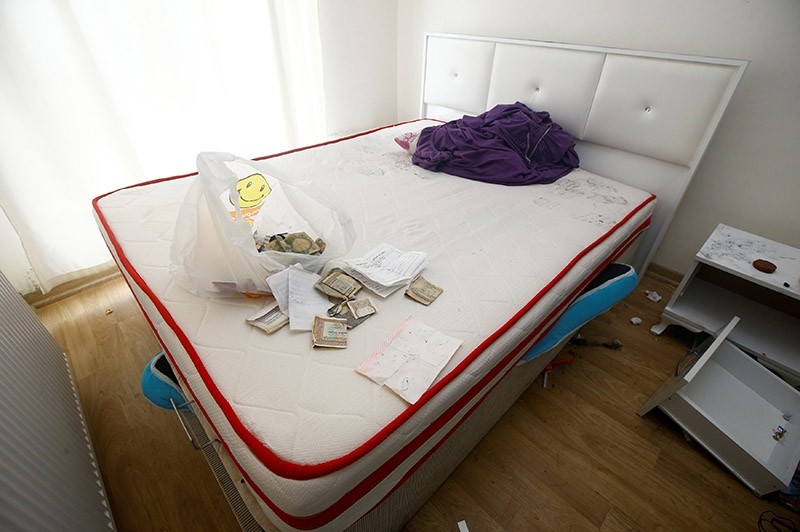 Foreign currency banknotes and various documents are seen in the bedroom of a hideout where the alleged attacker of Reina nightclub was caught by Turkish police last night, in Esenyurt neighborhood in Istanbul, Turkey, Jan. 17, 2017. (Reuters Photo)
by daily sabah Jan 17, 2017 12:00 am

As the terrorist that killed 39 people in Reina nightclub in Istanbul's Ortaköy district on New Year's Eve was captured by the police in a swift operation on late Monday, various items confiscated from his hideout point to a possible terror network that was scheming new attacks.

The 34-year-old Uzbek national Abdulgadir Masharipov was captured in Istanbul's Esenyurt district on late Monday, Istanbul Governor Vasip Şahin announced in a press conference on Tuesday, noting that it was beyond doubt that the attack had been carried out on behalf of the Daesh terrorist group.

Along with Masharipov, one Iraqi man and three women from Egypt, Senegal and Somalia were also detained in the flat being used as a hideout. Şahin stated that 50 people with links to Masharipov have been detained in the investigation. A detailed examination of the suspects is continuing to determine whether there were plans for them to be used in other terrorist attack schemes by the Daesh group.

Two drones, two handguns and $197,000 in cash were seized in the operation, Governor Şahin told the press conference. The purpose of the drones will be brought to light upon further investigation.

In addition to the amount seized in the hideout, the police previously seized $150,000 in Istanbul's Pendik district on Jan. 5, allegedly to be paid to Masharipov for the Reina attack.

Using the code name Abu Muhammad Al Horasani, Masharipov was described as a professional terrorist by Governor Şahin, who was trained in Afghanistan and knows four languages. Whether Masharipov was planning to recruit new terrorists and coordinate new terrorist attacks in Turkey with the money in his possession will be also be revealed.
Last Update: Jan 17, 2017 9:07 pm
RELATED TOPICS