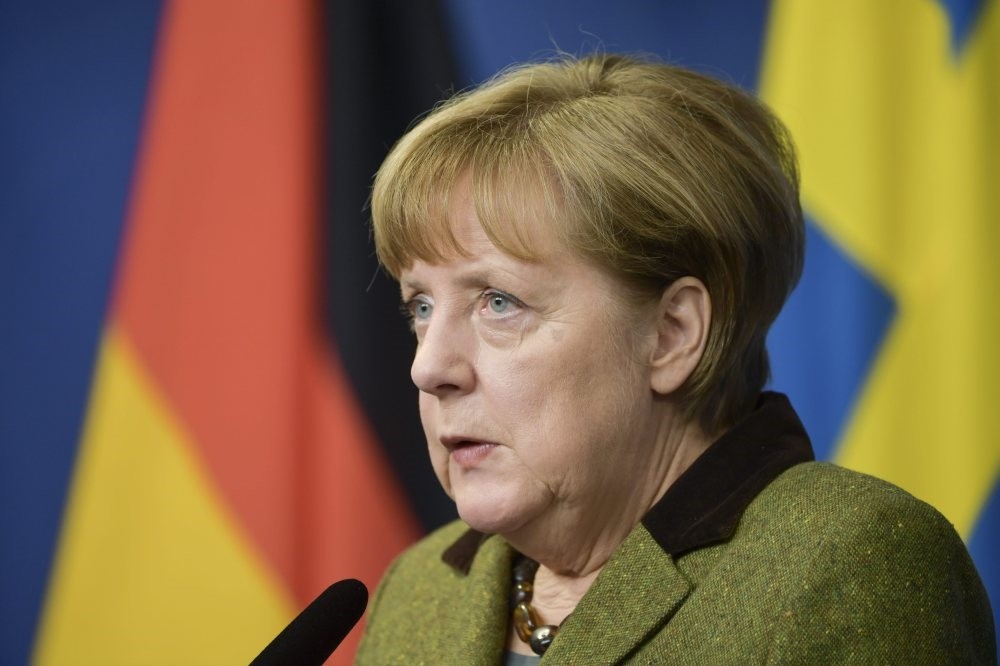 Ankara has criticized Germany for its indifference to terror groups that have threatened Turkey, including FETÖ, the PKK, and the DHKP-C and tolerance to their activities within Germany ahead of Merkel's visit to Ankara, saying Germany embraces terrorists creating trouble for Turkey

The damaged diplomatic trust in bilateral relations between Turkey and Germany over Germany's indifference to terror groups, namely the Gülenist Terror Group (FETÖ), the PKK and People's Liberation Party-Front (DHKP-C), will be among the top issues discussed in Ankara during Chancellor Angela Merkel's visit today. Ankara has criticized Germany ahead of Merkel's visit, saying the country does not support Turkey in its fight against terrorists, including Turkey's cross-border fight against the Daesh terror group. Deputy Prime Minister Veysi Kaynak said that Germany embraces all kinds of terrorists that create trouble for Turkey. Speaking at the AA Editors' Desk Wednesday, Kaynak expressed Turkey's frustration toward Germany in the fight against terrorism.

"Germany is a country that has embraced both PKK and DHKP-C terrorists – those who create trouble for Turkey. They also host FETÖ-linked former prosecutors. Germany is also a country that has good economic relations with Greece. Thus, from our perspective there is no difference between Greece's refusal of Turkey's extradition request for soldiers involved in the July 15 coup attempt and Germany's refusal of Turkey's extradition request for PKK terrorists and FETÖ members." Merkel will be visiting Prime Minister Binali Yıldırım in Ankara, where they are expected to hold a press conference, a week after U.K. Prime Minister Theresa May's visit to Turkey.

This is the first visit at the prime ministerial level from Germany since the July 15 coup attempt by FETÖ, coming after German Foreign Minister Frank-Walter Steinmeier's visit to Turkey in November last year.

Meanwhile, Germany has ruled out giving Turkey unfiltered access to imagery gathered by Tornado fighter jets operating out of İncirlik Air Base in southern Turkey as part of the broader fight against Daesh militants, said Germany's defense ministry.

German lawmakers, concerned that Turkey could use the high-resolution aerial imagery in its military campaign against autonomy-seeking People's Protection Units (YPG) terrorists, have put strict limits on how German forces can share the data they gather. A defense ministry spokesman declined to comment on a der Spiegel magazine report quoting a German diplomatic cable as saying that Turkey had linked its approval of German housing investments at the air base with getting access to the imagery. The issue, emerging a few days before Chancellor Merkel's scheduled meeting with Turkish President Recep Tayyip Erdoğan, could cause further strain on the already frayed relationship between the two NATO allies.

The cable described Turkey's push to tie the imagery issue to German plans to build new housing at the base as "blackmail," according to the magazine report. It said two senior Turkish officials, a senior military officer and Erdoğan's policy adviser, had personally issued the demand. The ministry spokesman said the German air force flew its surveillance missions in strict conformity with the underlying parliamentary mandate and provided the imagery "solely to the anti-Daesh coalition." He said the German military followed a careful process to ensure the data was not misused for other purposes. A German officer based in Qatar accepted only those missions aimed at the anti-Daesh fight, while another German officer based at İncirlik reviewed the images before releasing them to the coalition, the spokesman said.

German lawmakers last year voted to extend support for the U.S.-led fight against Daesh through the end of 2017, including deployment of over 250 soldiers at İncirlik. But this was only after Ankara reversed its position and allowed German lawmakers to visit the base. Turkey had angered Berlin by temporarily blocking the visits after German lawmakers voted last June to declare the alleged 1915 massacre of Armenians by Ottoman forces as "genocide." The two countries have also been at odds over Turkey's crackdown on dissidents after the failed July 15 coup and Turkey's claims that Germany is harboring PKK terrorists and other enemies of the Turkish state, which is denied by Berlin.

The PKK has continued to spread throughout European countries since 1999. In 2002, the European Commission officially classified the PKK as a terrorist organization. However, the PKK still enjoys great freedom under the protection of the EU. Ankara has repeatedly warned the EU of the PKK threat, but the EU continues to allow their activities. Thousands have lost their lives in PKK attacks.

Between 2006 and 2016, Turkey demanded the extradition of a total of 136 PKK terrorists from Germany. The German government agreed to hand over only three of them to Turkish authorities, the Justice Ministry announced.

In addition, Turkey's defense minister on Sunday was quoted as saying that Germany should reject requests for asylum from some 40 former Turkish soldiers that Ankara suspects of having links to the failed coup.
RELATED TOPICS