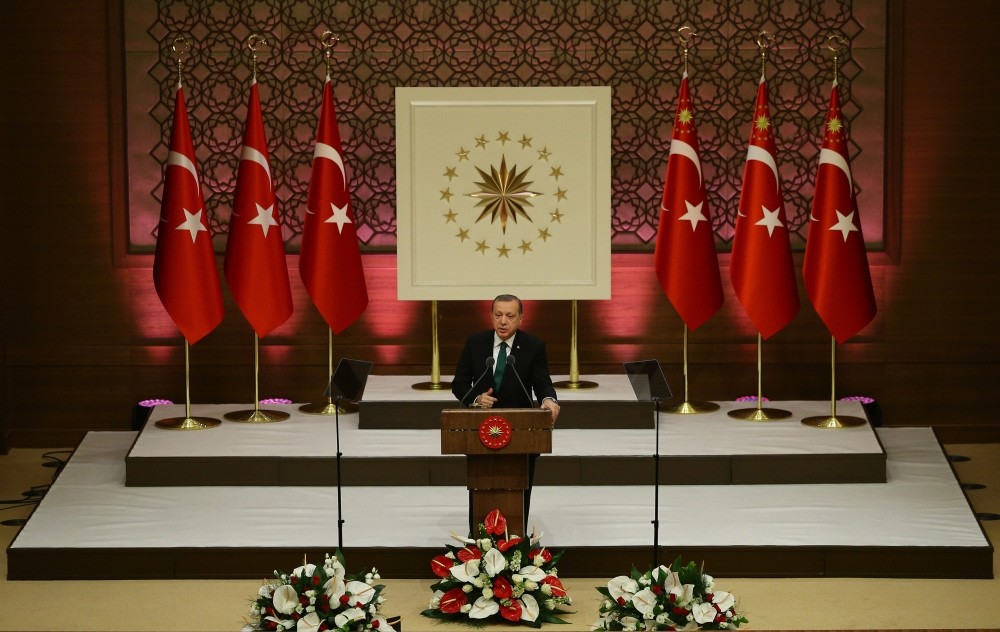 President Erdou011fan speaking at an awards ceremony held by the Turkish Academy of Sciences at Ankara's presidential complex on Feb. 1.
by Daily Sabah Feb 02, 2017 12:00 am

Speaking at an award ceremony held by the Turkish Academy of Sciences at the presidential complex in Ankara yesterday, President Recep Tayyip Erdoğan described Gülenist Terror Group (FETÖ) members as "unconscious slaves," saying, "Even though a vast number of the academics, judicial officials, policemen, soldiers, teachers and businessmen linked to FETÖ may have graduated from top universities, they have been deceived into following a charlatan's [referring to U.S.-based terror leader Fetullah Gülen] false claims."

President Erdoğan yesterday touched upon the significance of innovativeness and stated that "cultural retrograde lies behind all instability throughout history." On a similar note, Erdoğan said that "the malevolent network of FETÖ has taken advantage of [the Turkish] people's sensitivities and abused those sensitivities." He continued by saying that "FETÖ members have rented their hearts and minds out to a charlatan [Gülen] regardless of the high-quality education that they may have received." Erdoğan added, "As in any heretical structure, FETÖ members have lost their way. Forgetting what they are and who they are, they have become 'mankurt' [unconscious slaves] who do exactly what their owner orders."

Adding to his remarks by noting that the severity of the FETÖ terrorists' betrayal on the night of the July 15 failed coup attempt is comparable to the "invasion days against Turkey nearly a century ago," President Erdoğan also stressed that "the bombardment of Turkey's Grand National Assembly is the same as the closure of the Ottoman Chamber of Deputies." "Both incidents struck at the nation's will and destroyed our national sovereignty in efforts to make it ready for invasion," Erdoğan added.

FETÖ, led by the U.S.-based Gülen, is accused of orchestrating the deadly failed coup attempt and infiltrating the Turkish military and state institutions with aims to topple the democratically-elected government. However, on the night of July 15, Gülenist putschists targeted civilians as their fighter pilots bombed the Turkish Parliament. At least 246 people were killed during the putsch attempt as the Turkish public resisted FETÖ's attempts to impose martial law. By the morning of July 16, the coup had been defeated after police and military officials loyal to the government, along with unarmed civilians, put up a strong fight to stop the putschists.
RELATED TOPICS