by Anadolu Agency Feb 11, 2017 12:00 am
The Justice Ministry has requested the extradition of 28 Gülenist Terror Group (FETÖ) suspects residing in 16 countries including FETÖ leader Fetullah Gülen and other senior figures, according to Turkish judicial sources. 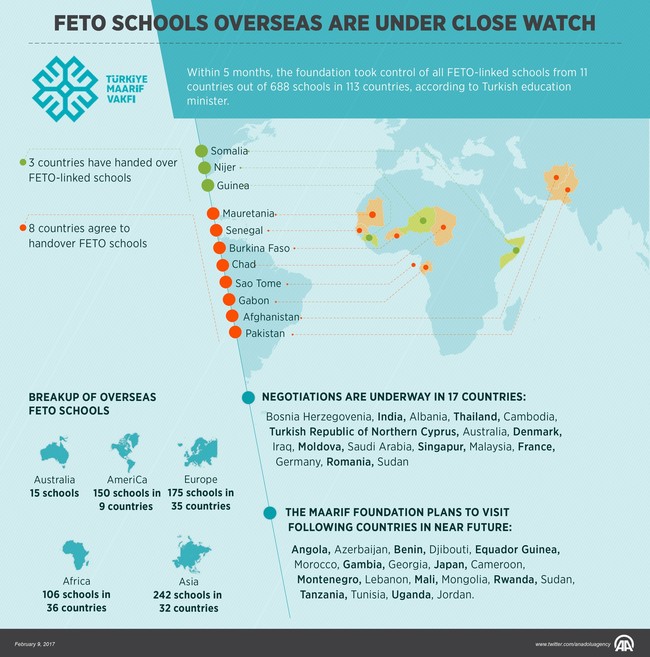 FETÖ's U.S.-based ringleader is the mastermind behind the failed July 15, 2016 coup attempt as stated by the government.

Since July 19, 2016, Turkey has been officially asking the U.S. to extradite Gülen.

Turkey has also requested the extradition of Emre Uslu from the U.S., a FETÖ former police officer and columnist who is charged with espionage, being a member of an armed terrorist group and attempting to overthrow the Turkish government.

Although Turkey sent evidence months ago to support Gülen's and Uslu's extradition, Washington says it is still reviewing the documents.

Without sharing the names of the 28 FETÖ suspects, officials from the Justice Ministry's International Law and Foreign Affairs Department told Anadolu Agency (AA) they prepared and sent 31 extradition files in total to 16 countries for those individuals since last July.

Turkey wants the extradition of two suspects each from Mozambique, Kazakhstan and Romania.

Öz and Kara played a key role in a controversial anti-corruption probe in late 2013 which targeted senior political figures in Turkey. Later, they were accused of fabricating evidence as part of a plot to overthrow the government.

The two men are thought to still be in Germany. Ankara has asked also Greece to extradite eight former Turkish soldiers who fled to Greece after the July 15 coup attempt.
RELATED TOPICS