US-backed YPG in between Turkish forces and Daesh-free Raqqa 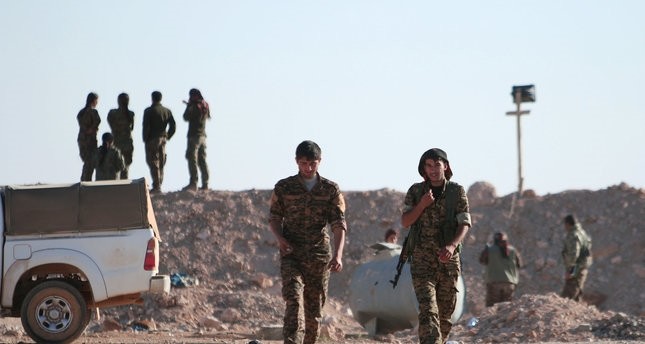 President Erdoğan announced Ankara's plan to move forward to Daesh's so-called capital Raqqa after al-Bab. However, questions remain over how Turkish-backed forces will liberate the city as U.S.-backed YPG terrorists are already on their way to Raqqa

Things are expected to heat up in northern Syria as Ankara eyes a possible offensive against Daesh's capital city of Raqqa, which the PKK's Syrian offshoot Democratic Union Party (PYD) is currently trying to capture as well.

The Turkish military-backed Free Syrian Army (FSA) has recently liberated most of the north Syrian town of al-Bab from Daesh terrorists. The fall of the town is imminent, per sources on the ground.

On Sunday, President Recep Tayyip Erdoğan ended the confusion, stating that Turkish-backed troops would go on to liberate PYD-held Manbij and Daesh-held Raqqa. "We are trying to eliminate terror from the region. That aim is about to be completed in al-Bab before we move on to Raqqa and Manbij afterwards," Erdoğan asserted.

Despite Ankara's ambition to eliminate Daesh from Raqqa and the PYD's armed wing, the Peoples' Protection Units (YPG), from Manbij, the situation on the ground is much more complicated than on paper.

The YPG, under the guise of the Syrian Democratic Forces (SDF), has for months been carrying out an offensive named the Wrath of the Euphrates to retake Raqqa. According to sources close to the YPG, which Ankara considers to be a terrorist group, it is only 10 kilometers away from Raqqa.

The terrorist group has received significant backing from the United States. The Obama administration provided arms, weapons and ammunition to the YPG as well as aerial support. U.S. support to the YPG played a crucial role in the group's advance toward Raqqa.

While Ankara seeks to move on to Raqqa and liberate the city from Daesh, the YPG could be on its way to the city center shortly.

Amid Ankara's assertive approach to capture Raqqa, questions loom about how a Turkish-backed offensive could be launched if the YPG is already there.

"For the time being, we do not know whether Turkey has a concrete plan to move forward to Raqqa or if this was said casually," Professor İlter Turan, a professor of international relations and former rector of Istanbul Bilgi University said. Turan drew attention to the reality of Turkey's cooperation with other actors regarding such a move, saying: "Al-Bab has become a border for the Turkish-backed forces. How Turkey will move to Raqqa from there is a question. Ankara needs to coordinate with other powers."

Mesut Hakkı Caşin, a foreign policy professor at Özyeğin University and an army veteran, said that Turkey took a significant step by liberating al-Bab. "Al-Bab is a vital point between Aleppo and Raqqa. Having control of al-Bab is an advantage," he said.

Prior to the YPG-led SDF offensive to capture Raqqa, Ankara called on Washington to desist from arming and equipping the terrorist group and using them on the ground against Daesh. The government offered a joint Turkish-U.S. operation for the fall of Raqqa.

"Raqqa is one of the issues the U.S. and Turkey are currently discussing," Erdoğan said in a conversation with journalists in early September 2016. A month later, when the U.S. decided to side with the YPG against Raqqa, Defense Minister Fikri Işık urged the U.S. to exclude the YPG and join forces with Turkey. On Nov. 6, the YPG-led SDF announced the start of the offensive to retake Raqqa. Three months into the operation, they are now just kilometers away from the city. However, the amount of time it will take to completely take over the city it remains a matter of great uncertainty.

U.S. President Donald Trump's policy toward the YPG will be a vital factor as well. Whether or not Trump will continue to work with the YPG is an open question. A major policy shift in Washington in favor of Ankara could be a game changer on the ground.

"The Trump administration has softened their tone toward Turkey. They started to praise Turkey's efforts on the ground as well," Caşin said. Stressing that Erdoğan must have the backing of several actors to declare such a plan, he said that the upcoming weeks will determine the future of Turkey's actions. Despite Ankara's warming relations with the U.S. in the wake of Trump's presidency, Caşin said that Turkey will not completely move away from Russia.

Caşin pointed to the YPG's ditches and trenches around Manbij and the Syrian regime flags flying high in YPG-held areas, saying: "The YPG knows Turkey is on the move toward them as well. They are taking action."

As the anti-Daesh fight continues in Iraq an operation by the peshmerga forces and Iraqi army was launched in mid-October to retake Mosul from the terrorists. Four months into the offensive, the Iraqi army, led by the extremist Shiite group, the Hashd al-Shaabi, has only been able to capture the eastern side of Mosul.

The large presence of Shiite militias within the Iraqi army has been a topic of concern for innocent civilians in Mosul. Turkey has discussed the matter in the international arena. Mosul is predominantly Sunni Arab and Shiite militias such as the Hashd al-Shaabi could hurt civilians as part of the sectarian policy it follows.

The Mosul operation has slowed down from time to time because of Daesh's tactics against the Iraqi special forces. Daesh terrorists have sent hundreds of suicide attack vehicles and have fired as many rockets as well as periodically directly blowing themselves up.

U.S. Army Lt. Gen. Stephen Townsend said last week that the Mosul operation would be concluded "within the next six months, I think."

In addition, the Hashd al-Shaabi and peshmergas have not been getting along well. The Iraqi media reported that Hashd al-Shaabi forces bombed peshmerga positions in northern Iraq's Sinjar region in late January.
RELATED TOPICS