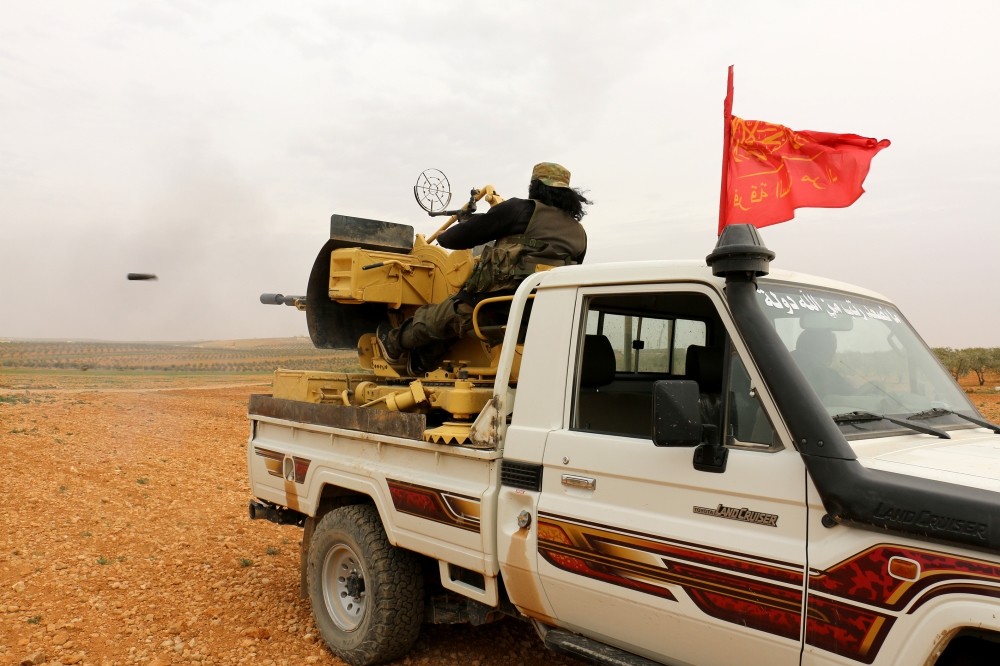 FSA forces captured the villages of Tal Turin and Qara in the eastern part of Al-Bab after violent clashes with the YPG terrorists on March 1.
by Daily Sabah Mar 03, 2017 12:00 am

During his return trip from Pakistan, President Erdoğan said, following the recent liberation of al-Bab in northern Syria, the next aim of Operation Euphrates Shield is to liberate Manbij and Raqqa, majority Arab-populated cities held respectively by the PKK-linked YPG and Daesh

Turkish President Recep Tayyip Erdoğan said Thursday that Manbij and Raqqa belong to the Arabs and Turkey's next target in Syria is to liberate these two cities, respectively controlled by the Syrian Democratic Forces (SDF), controlled mostly by the PKK-affiliated Democratic Union Party (PYD) and its armed wing, the People's Protection Units (YPG), and the Daesh terror group.

Speaking to journalists on the presidential plane during his return trip from Pakistan, Erdoğan reiterated that Turkey will not allow an independent terrorist state to be present along its border. ''After the liberation of al-Bab from Daesh terrorists, Turkey's new target in Syria is Manbij. Manbij is a city that belongs to the Arabs, and the SDF must also not be in Raqqa,'' the Turkish president said.

Answering a question regarding U.S. support to the SDF, Erdoğan noted that the new Trump administration does not seem to have yet reached a final decision as to how the operation to free Raqqa from Daesh should be organized. ''Their chief of staff [U.S. Gen. Joseph Dunford], and the new head of the CIA [Mike Pompeo] came to Turkey and we too told them that the SDF must be excluded from the Raqqa operation. The presence of armed terrorists along its borders is unacceptable for Turkey, '' Erdoğan said.

On Feb. 23, the Turkish army and the Free Syrian Army (FSA) units cleared the northern Syrian town of al-Bab from Daesh terrorists with successful progress. On Tuesday, Turkish President Recep Tayyip Erdoğan said Turkey's next target in Syria is the YPG-held town of Manbij.

Meanwhile, later in the day speaking at the ombudsman symposium at the Beştepe Presidential Complex, President Erdoğan said having once been smeared as a Daesh-supporter, Turkey has been giving the most effective fight against Daesh and has eliminated 3,000 terrorist so far in the fight in northern Syria during Operation Euphrates Shield. He added that even though many Western officials personally told him that Turkey's none-fly zone area proposal would be the right move, none of them practically support the idea.

Also, Foreign Minister Mevlüt Çavuşoğlu spoke about the issue yesterday and reminded the U.S. of its promise on the withdrawal of PYD forces from Manbij, adding that Turkey will take action if the promise will be not kept. "We will move towards Manbij after al-Bab. The operation is not started yet. We know that there are U.S. forces stationed there. The YPG forces should pull back from the area, otherwise we will hit them, as we said before," Çavuşoğlu said.

He added that the Raqqa operation has been discussed with the U.S and emphasized the U.S. authorities' statement that says there is no difference between the PKK and the YPG. "Carrying out the Raqqa operation with the YPG is putting Syria's future at risk. It means the establishment of a terror camp. Our attitude regarding this issue is very clear and strict," Çavuşoğlu said.

In the meantime, the U.S.-allied SDF has agreed to handover villages in western Manbij to the Assad regime by an agreement with Russia, just after the FSA and Turkish forces started to advance through the city. The SDF's Manbij Military Council made an announcement, citing "protection of civilian areas" as the reason to handover the villages to the Assad regime, which has been blamed for serious human right abuses and the killing of hundreds of thousand civilians by human right groups.

Despite Turkish protestations and providing countless evidence proving that the YPG is the Syrian affiliate of the PKK, the U.S. has so far rejected considering the YPG as a terrorist organization.

Turkey launched Operation Euphrates Shield on Aug. 24, 2016, declaring that it was exercising its right of self-defense codified under United Nations Charter Article 51. A National Security Council press release on Nov. 30, 2016 stated that the operation's objectives are to maintain border security and confront Daesh terrorism within the framework of the U.N. Charter.

It also emphasized not allowing the PKK terrorist organization, or its Syrian affiliates the PYD/YPG, to establish a corridor of terror on Turkey's doorstep.

Russia, Turkey may carry out joint operation against Daesh in Raqqa

President Recep Tayyip Erdoğan answered the question about the future of Operation Euphrates Shield after al-Bab, stating that in the case of a demand, Ankara could also conduct a joint operation in Syria with Russia.

"The liberation process of al-Bab is continuing. After al-Bab, Manbij will be next. If we can take joint steps with the coalition forces, we will carry out the Raqqa operation together as well. In the case of a demand from Russia, we may act against Daesh all together," he said.