45 people including judges, prosecutors laid off as part of FETÖ probe 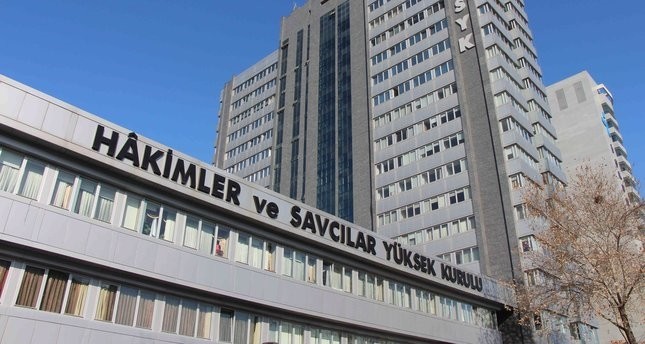 The Supreme Board of Judges and Prosecutors (HSYK) has laid off 45 people who are either judges or prosecutors as part of the ongoing Gülenist terror cult (FETÖ) probe, judicial sources said late Monday.

Among the discharged members are İbrahim Lorasdağı, the head of the Istanbul 25th Heavy Penal Court as well as the trial prosecutor of the case Göksel Turan, and two court members Barış Cömert and Necla Yeşilyurt Gülbiçim.

The judges and prosecutors will be temporarily suspended from their work until a investigation into the claims has been concluded.

The team under Lorasdağı's presidency had decided to release 21 detainees out of 29 people linked to FETÖ-- including senior Gülenists Hanım Büşra Erdal and Gökçe Fırat Çulhaoğlu -- as part of a case into FETÖ's media network.

The first hearing of the trial on the Gülenist Terror Group's (FETÖ) influence on tmedia commenced last Monday in Istanbul.

29 defendants accused of pro-FETÖ propaganda face prison terms of up to 22 years on charges of 'being a member of a terrorist group', and 'aiding and abetting terror'.

Defendants range from Atilla Taş, a pop music singer who took to writing pro-FETÖ pieces in recent years, to Gökçe Fırat Çulhaoğlu, who ran a far-left publication that opposed Turkey's crackdown on the terrorist group.

Two defendants are being tried in absentia, including Said Sefa, a journalist who is accused of setting up the notorious FETÖ-linked Twitter account "fuatavni."

Fuatavni was a purported whistleblower that disseminated confidential information regarding the inner workings of the presidential complex in Ankara and often hurled insults and threats at President Recep Tayyip Erdoğan.

The terrorist group, which faces a new barrage of trials after the July 15 coup attempt, its latest bid to seize power through its infiltrators, is accused of running media outlets to vindicate its actions and orchestrating defamation campaigns against the cult's critics.

Several lawmakers from the opposition Republican People's Party (CHP), whose members have been a fixture in trials against FETÖ, watched the trial open at the 25th High Criminal Court in Istanbul's Çağlayan courthouse complex.