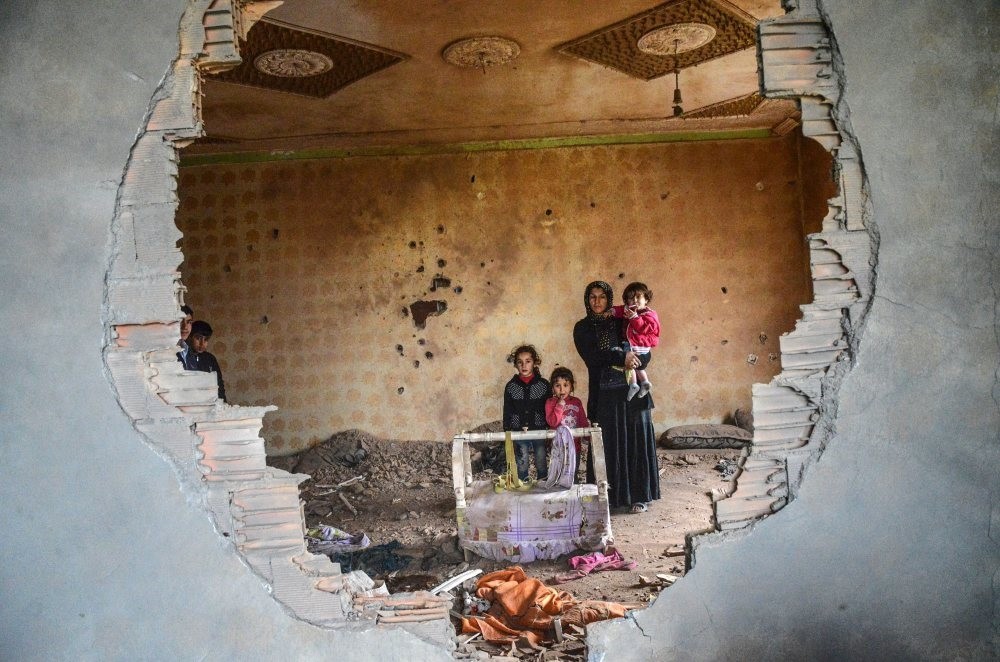 Decades of terror attacks have left Turkey's southeast in a traumatic state. Months after a crackdown on the PKK terrorist group that more or less wiped out its influence in the region, psychiatry experts and social workers are going door to door to help the population recover from the violent past

Şırnak, a poor border province neighboring Iraq, has long been associated with terrorism and its residents have suffered for decades from the PKK terrorist group's violent campaign that has killed thousands and more or less halted economic development. After successful anti-terror operations that curbed the PKK presence in the city last year, the government now turns to address the needs of the locals. The psycho-social impact that terrorism has left on the locals is one issue that immediately needs to be addressed.

To that end, the Family and Social Policies Ministry has deployed teams of social workers, sociology experts, psychiatry experts and child welfare experts to the city.

A delegation of 100 officials goes door to door in central Şırnak and its districts Cizre, Silopi and İdil, visiting families of terror victims.

Some 162,000 people, in this province of 483,788 people, are benefitting from visits from the "psycho-social support teams" so far while the state also provided cash support amounting to TL 3 million ($800,000) to 1,709 people whose properties and income were hurt by acts of terror.

The province was a flashpoint area last year as the PKK supporters barricaded the streets and clashed with security forces as well staging terror attacks, intimidating the locals and destroying properties.

Security forces countering the terrorists managed to put an end to months of terror in anti-terror operations while locals displaced the terror campaign started returning home as rebuilding work is also in process.

For its part, the Family and Social Policies Ministry mobilized its staff for the families in need. The ministry's teams visit locals to hear their problems, especially in terms of aid and the trauma inflicted by PKK terror, offering both cash and grief counsel.

Muzaffer Akçam, the Şırnak director of the ministry, said their efforts cover all towns in the province where terror victims live and they have reached out to more than 35,000 people in Silopi, more than 76,000 people in Cizre and 15,215 people in İdil.

These were the towns synonymous with the PKK terror which focused on the southeastern and eastern Turkey where it exploits ethnic Kurds as its recruits while killing or threatening any Kurd opposing their self-styled cause of self-rule.

Akçam said they did not "leave any door un-knocked."

"As we were giving them psychiatric support, we also assessed their financial status and supplied cash to cash-strapped families. For instance, 511 families in Silopi received TL 684,000 in total," he said.

Authorities also direct terror-stricken families to hospitals for trauma treatment. Akçam said they would also pay regular visits to families to check out their state and added that the families appreciated the support.

Hizni Bakır is the patriarch of one of two families who had to share an apartment flat together when their houses were destroyed in terror attacks.

The ministry's teams visited two families on Monday and apart from counsel service, delivered toys to the families' children.

"We had to move a couple of times last year because of attacks. We have been through difficult days and it has affected the children most. We now survive on state aid," Bakır said.

Medine Yorga, whose house in another neighborhood was razed to the ground in a terror attack, benefits from temporary housing.

"I thank everyone who helped us recover," she says.

The PKK launched a spate of attacks in 2015 following the declaration of the end to a unilateral "truce" with Turkey.

Since then, the terrorist group has killed hundreds of civilians, soldiers and police officers both in the southeastern region and in other cities.

As it further spread its threat to cities, Turkey moved for an urban anti-terror campaign, effectively ending the PKK presence across the region though the group occasionally stages attacks both in the southeast as well as in western cities.

After an end to anti-terror operations, Turkey launched an overhaul in the southeast to compensate for the losses.

Although the local population has been accustomed to the continuous terror threat since the 1980s when the PKK first emerged, it will still take more time for the recovery of daily life.

The government is gradually paying compensation to the displaced victims.

A rebuilding process is underway for damaged and collapsed buildings. New housing units are being built while Turkey strives to draw investment to the region to propel economic development which has been absent for decades.

In Şırnak, more than 8,800 new residences are planned to be built, to replace damaged buildings.

A year of terror took a heavy toll on the southeastern region and more than 30,000 residences are believed to be damaged or completely destroyed in terror attacks.

Ruined buildings, booby-trapped by fleeing terrorists, have complicated the recovery efforts in the region.
RELATED TOPICS