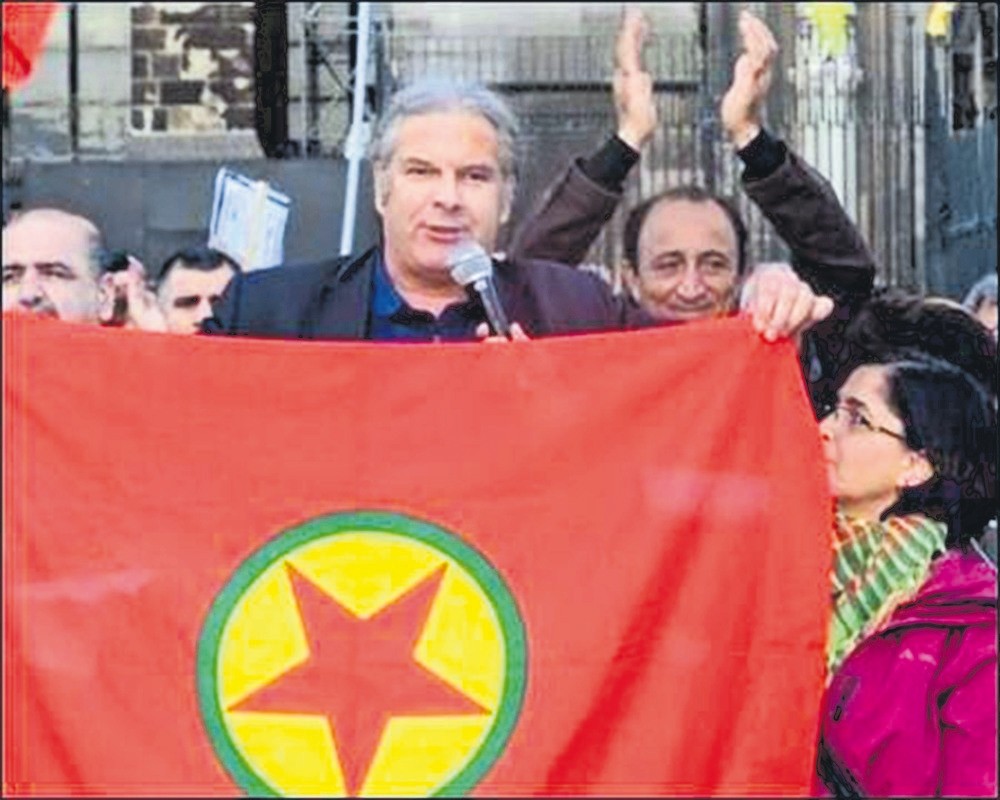 While controversy surrounding the objectivity of a recent OSCE report on Turkey's referendum lingers, German MP Andrej Hunko, an observer of the referendum, made a controversial statement as he claimed that the PKK, which has committed numerous suicide attacks and caused thousands of deaths, is "not a terror group," despite his country, the EU and EUROPOL saying the exact opposite

The room for debate has grown after one of the observers in the joint team of Organization and Co-operation in Europe (OSCE) and Parliamentary Assembly of the Council of Europe (PACE), which penned a report on the April 16 referendum process in Turkey, was pictured holding a PKK banner.

In a statement released on his official website, the OSCE observer, Andrej Hunko, said that PACE "does not consider the PKK as a terrorist organization," further fueling the controversy.

"Following my participation in a Council of Europe election observation delegation to Turkey, AKP supporters started a de-legitimization campaign against me and are attempting to discredit me as a PKK sympathizer," he said, using an incorrect acronym, AKP, to refer to the ruling Justice and Development Party (AK Party).

"This method has also been used in recent months as justification for the mass arrests and dismissals in Turkey. Among others, Turkish Foreign Minister Mevlüt Çavuşoğlu has made comments to this effect. And yet as a former member of the Parliamentary Assembly of the Council of Europe, he knows that the PKK is not considered a terrorist organization by the Assembly," he added.

Speaking to Daily Sabah, a former deputy at the European Parliament Ozan Ceyhun said that Hunko's comment regarding the PKK was "nonsense," and observers should adhere to the laws of their own countries, since they were assigned by their governments, not by PACE.

"A German deputy cannot legally say that 'PKK is not a terrorist group' since it has the responsibility to abide by the laws of its own country. And as we all know, the PKK was recognized as terrorist organization many years ago by Germany and despite some efforts to remove it from the list, its situation has not changed over time," Ceyhun said.

"PACE can't adjudicate such ruling. The PKK is officially recognized as a terrorist organization in the EU and by the European Police Office (EUROPOL)," he added.

Meanwhile, the Council of Europe's secretary-general said Thursday that is not possible for an international organization to annul a referendum in any country, after Turkey's main opposition party said it would take Sunday's referendum results to the European Court of Human Rights.

According to the German Deutsche Welle's report, Thorbjorn Jagland, secretary general of Europe's top rights watchdog said that there has been no ECoHR ruling regarding a referendum before.

The debate regarding the legitimacy of the report, which said that the referendum process in Turkey "fell short of international standards," started after photos of Hunko posing with banners belonging to the PKK terrorist group surfaced online.

Meanwhile, the fact that another observer, Ričardas Ramoška is allegedly a bribery convict has cast even more of a shadow over the legitimacy and objectivity of the report.

The controversy of the report, however, is growing more and more as many other PACE observers are being revealed as PKK sympathizers.Nikolaj Villumsen, a Danish member of parliament from Enhedslisten and one of the five members of PACE's Danish delegation who observed the election process in western İzmir province, also published a video where he and another Enhedslisten member of parliament, Pernille Skipper, were seen urging Turks to vote "no" as the voting process was still continuing for Turkish citizens in foreign countries.

Moreover, Villumsen, likewise with Hunko, also urged his country's parliament to remove the PKK from the EU's terrorist organizations list.

In 2014, Villumsen also handed over 53,500 Danish Krons (nearly $8,300) to the PKK's Syrian affiliate Democratic Union Party (PYD) leader Salih Muslim in Copenhagen. After the handover, the Danish People's Party's (DPP) said Enhedslisten may have committed a terror crime and urged the Danish police to investigate the issue.

Apart from Villumsen and Hunko, European Council observers Stefan Schennach from the Social Democratic Party of Austria as well as Alev Korun and Zerife Yatkın from Austria's Green Party were revealed as other members who supported or took part in PKK activities and actively supported the "no" campaign.