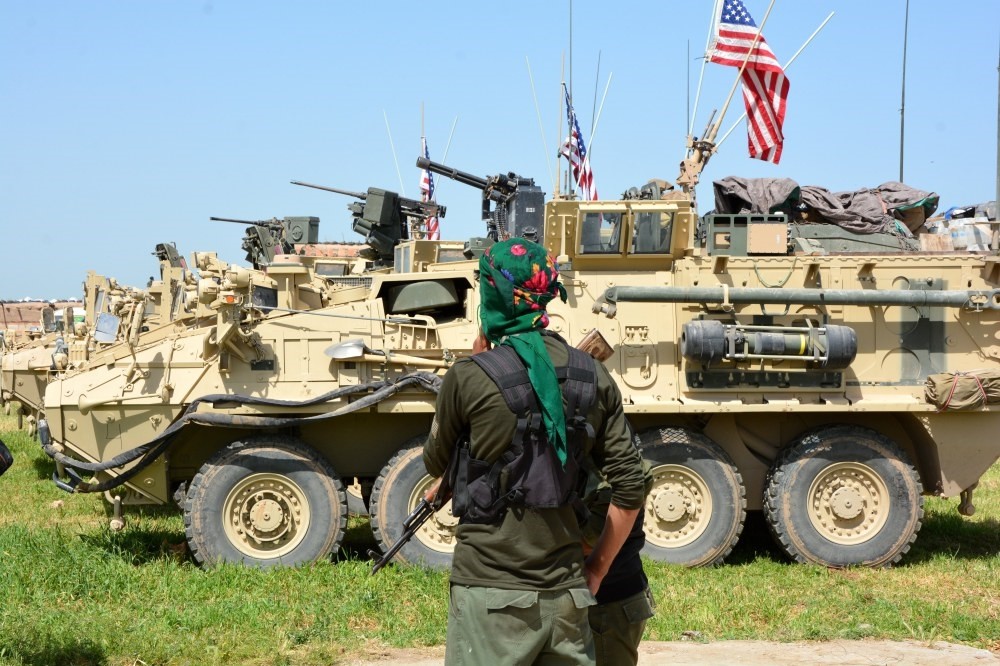 YPG terrorists stand next to US eight-wheeled armored fighting vehicles, near al-Ghanamya village, al-Darbasiyah town at the Syrian-Turkish border on April 29.
by Daily Sabah May 11, 2017 12:00 am

Over the Trump administration's statement that it will provide the PKK terror group's Syria affiliate, the YPG, with heavier arms to battle Daesh, Turkish officials urged the NATO ally to avoid mirroring Obama's failed policies

U.S. President Donald Trump's decision to authorize the Defense Department to equip the U.S.-backed Syrian Democratic Forces (SDF), which is predominantly led by the PKK terror organization's Syria offshoot, the People's Protection Units (YPG), has angered Ankara ahead of the upcoming visit by President Recep Tayyip Erdoğan to the U.S. where he will meet Trump for the first time. Prime Minister Binali Yıldırım yesterday slammed the U.S. decision to arm the PKK's offshoot group for the offensive against the Daesh terror group in Syria's Raqqa, saying, "A terror organization cannot be defeated by another terror group."

"It is not possible for us to accept direct or indirect aid to the PKK. The U.S. should make a decision. If a fight against terror will be put forward, Turkey is already doing that," Prime Minister Yıldırım said during a press conference in Ankara, ahead of his visit to the United Kingdom. "There is still an opportunity for the United States to take Turkey's sensitivities into consideration. Otherwise, the outcome won't only affect Turkey, a negative outcome will also emerge for the United States," he said.

Trump authorized the Defense Department to equip "Kurdish elements" of the U.S.-backed SDF on Monday "to ensure a clear victory" over Daesh in Raqqa, Syria.

U.S. support for the SDF has been a major strain on relations between Washington and Ankara as the YPG forms the backbone of SDF forces. The U.S. says supporting the SDF is the only alternative for defeating the Daesh terrorist group, whereas Turkey says an alternative should be formed through local Arab tribes backed by countries in the region instead of supporting a terrorist group.

Turkey considers the Democratic Union Party (PYD) and its armed wing, the YPG, to be Syrian affiliates of the PKK, a proscribed terrorist organization in the U.S., Turkey and the EU.

"We are keenly aware of the security concerns of our coalition partner Turkey," said Pentagon spokeswoman Dana White, who is traveling with Defense Secretary Jim Mattis in Lithuania, confirming the decision on Tuesday in a statement following the announcement. "We want to reassure the people and government of Turkey that the U.S. is committed to preventing additional security risks and protecting our NATO ally."

President Erdoğan has repeatedly voiced concern over U.S. support to the YPG, which he recently called the remnants of former President Barack Obama's administration, saying a terror organization cannot be defeated by another.

President Erdoğan will have the first face-to-face meeting with Trump in the U.S. on May 16-17, where the two leaders are expected to discuss the loaded issue in detail.

U.S. Special Presidential Envoy for the Global Coalition to Counter Daesh Brett McGurk, who was seen with YPG members in Syria in photos circulated in social media, was appointed during the Obama administration.

"The visit to the U.S. on May 16 is very important for me. I see what is taking place in Syria as the remnants of the Obama era, with U.S. commanders in the region persisting in following the same policies. During the visit, we'll be discussing these subjects with President Donald Trump and express our consternation over its continuance. If it continues as is, it is impossible for us to be in agreement with the U.S," President Erdoğan told reporters early May, during his return from a two-day official visit to India.

Arming YPG in Syria a threat to Turkey's national security

Foreign Minister Mevlüt Çavuşoğlu also criticized the decision yesterday saying that every weapon obtained by the PKK-affiliated YPG in northern Syria constitutes a threat to Turkey, and Turkey considers both the PKK and YPG as terror groups. Speaking in Montenegro's capital Podgorica, Çavuşoğlu said that the U.S. administration knows Turkey's position on the YPG very well and should not take wrong steps in Syria.

U.S. Defense Secretary Mattis said yesterday that he was confident the United States would be able to resolve tensions with Turkey over the U.S. decision to arm PKK-linked YPG forces in Syria, saying: "We'll work out any of the concerns." "We will work very closely with Turkey in support of their security on their southern border. It's Europe's southern border, and we'll stay closely connected," Mattis told reporters during a visit to the Pabrade Training Area in Lithuania.

The Pentagon has not specified what types of support the U.S. would begin to supply under the new authority, but a Defense official said it would include small arms, machine guns, ammunition, armored vehicles, trucks and engineering equipment.

Defense Minister Fikri Işık said yesterday that Turkey's concerns have been communicated with the U.S. and that arming the group will bring the region into further chaos.

Ankara also argues that the Washington administration is in contradiction while arming the YPG, the group known for its organic links to the PKK, which the U.S. recognizes as a terror group, and this is done despite the U.S.'s strategic NATO ally, Turkey.

Turkish authorities labeled the PYD as the KCK's Syrian branch in 2009.

Koma Civakên Kurdistan (KCK), the Kurdish Communities Union, is a supreme body that supervises associated organizations created by Abdullah Öcalan when he was looking for new ways to increase his outreach across the region. PKK leader Abdullah Öcalan stated in an interview with Iraqi television Zelal in 2013, "I founded the PYD as I did the PJAK [the PKK's Iranian arm]. We did not use the word 'Kurdistan' in the party's title because we did not want to provoke the Syrian regime. The PYD is connected to the PKK and acts upon the PKK's orders."

The PYD has come under the spotlight for its crimes against Arab and Turkmen locals in northern Syria, as part of its attempt to conduct demographic changes. The PYD's forced migration of Arabs and Turkmens, as well as arbitrary arrests of critical voices and recruitment of child soldiers, have also been covered by international human rights groups, including Human Rights Watch, Amnesty International and KurdsWatch.