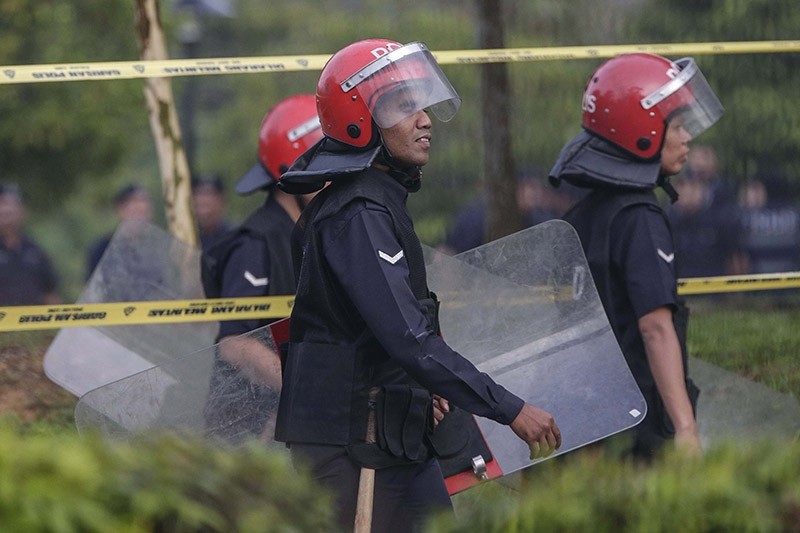 Members of The Federal Reserve Unit (FRU) of the Royal Malaysian Police secure the area of magistrates' court in Sepang, Malaysia, 13 April 2017. (EPA Photo)
by Daily Sabah with Wires May 12, 2017 12:00 am

Malaysia has deported three men accused of being members of the Gülenist Terror Group (FETÖ), which is blamed for the 2016 coup attempt in Turkey, upon the request of the Turkish government.

Turgay Karaman and Ihsan Aslan were arrested last week under Section 130 of the Penal Code that prohibits aiding the escape of, rescuing or harboring any prisoner of the state.

Turgay Karaman was a witness in the trial of Ismet Özçelik, another suspected FETÖ member who was detained last year in Malaysia. Aslan is a businessman while Karaman is the administrator of a school linked to FETÖ in Malaysia according to Turkish media outlets.

Two days later Ismet Özçelik, who spent 50 days in Sungai Buloh prison last year, was taken back into custody after being categorized as a national security threat.

"Police investigations showed they were involved in FETÖ activities and are wanted by Turkey," Khalid said in a separate statement.

Khalid said the men's travel documents had been cancelled by Ankara and so they were regarded as illegals immigrants in Malaysia.

Turkey, which detained and arrested hundreds for links to FETÖ in the aftermath of the bloody putsch bid that killed 248 people, launched diplomatic efforts to terminate the terrorist group's activities around the world.

The two suspects, Alattin Duman and Tamer Tıbık, were senior militants of the terrorist group, with Duman being Malaysia's "imam" ("point man") for FETÖ, according to Turkish authorities. The suspects have since been arrested on terror charges.

Malaysia last year had detained three FETÖ suspects and extradited them to Turkey in October.

The terrorist group made its first foray into Malaysia about two decades ago. It opened a school attended by the children of the Malaysian elite.

High-ranking members of the terrorist group, including its leader Fetullah Gülen, are already abroad while those in the lower ranks fled the country after it failed in the brutal putsch bid. The Interpol liaison office of the Turkish police is spearheading the efforts to bring back FETÖ members from abroad.

Ankara vowed to bring all FETÖ suspects to justice in the aftermath of the coup attempt that laid bare just how desperate the terrorist group was to seize power in the face of a crackdown against it.