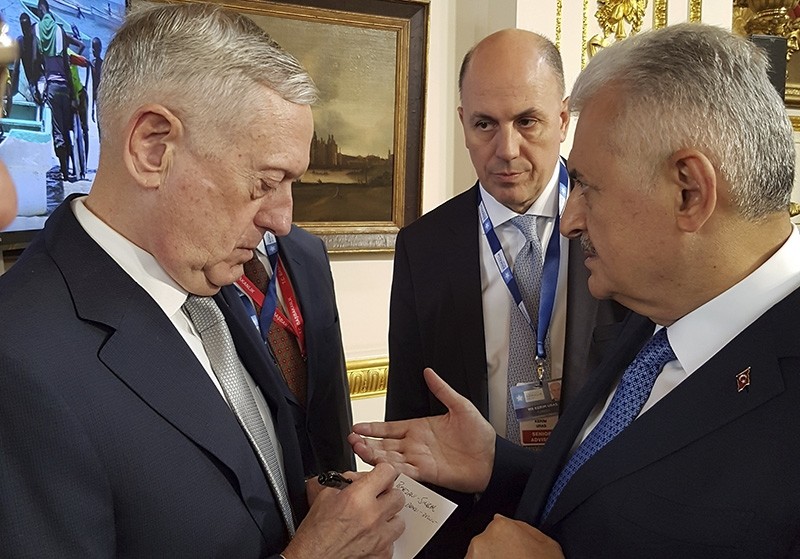 The U.S. Secretary of Defense, James Mattis, had difficulty justifying his country's stance when Prime Minister Binali Yıldırım told him that Turkey viewed the PKK and the People's Protection Units (YPG) as terrorist organizations and expressed concern over the U.S. decision to provide heavy arms to the YPG, reports said Sunday.

According to new details about the meeting between Yıldırım and Mattis, which took place in London earlier in the week, Defense Secretary Mattis told the Turkish PM that the U.S. decision to arm the YPG was not a 'choice' but an 'obligation' in the operation to liberate Syria's Raqqa from Daesh.

Yıldırım told Mattis that Turkey was concerned because the weapons given to the YPG could end up in the hands of the PKK, a terrorist group that carries out attacks targeting police, soldiers and civilians in the country.

In response, Mattis reportedly told Yıldırım that Washington would establish a tracking system to ensure the weapons did not end up in the hands of other groups, and that the YPG would allegedly leave the area after the Raqqa operation.

Yıldırım also told Mattis that the U.S. still had a chance to fix relations with Turkey.

U.S. support for the SDF has been a major strain on relations between Washington and Ankara as the PKK-affiliated YPG forms the backbone of SDF forces. The U.S. says that supporting the SDF is the only option for defeating the Daesh terrorist group, while Turkey says that an alternative should be formed through local Arab tribes backed by countries in the region instead of supporting the YPG terrorist group.