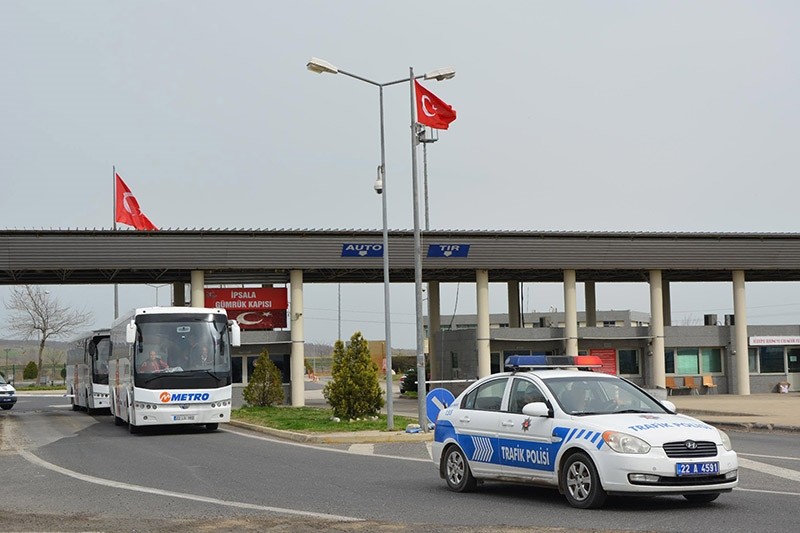 Security forces capture three officers from elite military unit who attempted to abduct President Erdoğan during July 15 coup bid. Suspects were trying to flee the country when they were nabbed

Three officers who, according to their initial testimony, attempted to abduct President Recep Tayyip Erdoğan during last year's coup attempt blamed on the Gülenist Terror Group (FETÖ), were captured by authorities en route to Edirne, a town bordering Bulgaria and Greece. The men were commandos in the Underwater Search Team (SAT), an amphibious elite military unit.

The suspects were tracked by the intelligence service and police, who received information that they would flee the country via the Edirne border. Authorities announced Tuesday that the suspects, identified only as 1st Lt. A.Ç., non-commissioned officers Y.Ö. and M.Ö. were hiding out near toll booths at a highway connecting Istanbul and Edirne. The suspects are among hundreds wanted for involvement in the coup attempt.

Media outlets reported that the three men acknowledged their links to FETÖ, a group notorious for its widespread infiltration of the army. In their first testimonies to the authorities, they said they were notified of the coup five days ahead and that the putschists' plan was to kidnap the president from his residence in Istanbul. Erdoğan, credited with staving off the coup attempt by rallying the public against the putschists, would then be taken to a military vessel in the Marmara Sea. The suspects said they had to change plans when they found out that the president was not in Istanbul during the putsch bid. Erdoğan was on vacation with his family in Marmaris, a southwestern resort town when the putschists moved to seize power.

The three suspects then decided to go to Marmaris, apparently to assist a team of elite military officers who were dispatched by the coup plotters to kill the president. However, putsch commanders instead summoned them to Akıncı, a military base in the capital Ankara that was used as the command center of the coup. Army chief Hulusi Akar and other top commanders opposing the putsch were held hostage at the Akıncı base. The suspects are still being questioned and more details are expected to emerge about their actions after arriving at Akıncı and in the aftermath of the coup attempt. Thanks to strong public resistance and the resilience of anti-coup police and military officers, the coup bid was foiled in the early hours of July 16.

FETÖ, which had infiltrated everywhere from the military and bureaucracy to law enforcement and judiciary, saw its advances to seize power thwarted twice in 2013. Last summer, the terrorist group moved once again in a brazen attempt to topple the government. The group's leader Fetullah Gülen and Adil Öksüz, a theology lecturer serving as point man for officers loyal to Gülen, are accused of masterminding the coup attempt with generals linked to the group. A total of 248 people were killed and hundreds others were injured when putschists randomly opened fire on unarmed civilians confronting them or during fierce clashes between putschists and security forces opposing the takeover attempts.

Erdoğan has spearheaded the fight against FETÖ since it was named the "parallel state" (in reference to their infiltration bid) after its followers in the judiciary and police launched probes to implicate government officials in 2013. In December 2013, two attempts were foiled and Turkey moved to crack down on the terrorist group, which managed to flourish under the guise of a religious charity.

The president escaped the assassination attempt in Marmaris and dodged his pursuers while flying to Istanbul. As the coup attempt unfolded, the president took to a live video app to address the nation, urging them to take to the streets. Assassins, however, stormed the hotel where he had been staying anyway and killed police officers guarding the premises.

Forty-four officers who are a mix of putschists from elite units of the Turkish Armed Forces stand trial in Muğla (the province where Marmaris is located), for the assassination attempt. Some defendants acknowledged their mission to kidnap or kill Erdoğan, while others claim they were sent to protect him. The indictment against the soldiers says Fetullah Gülen, the elusive FETÖ leader, personally approved the plan to capture or assassinate Erdoğan during the putsch attempt, just as he did for other coup plans. He is also believed to have ordered the capture of strategic locations from the presidential palace to the army's headquarters.

Gülen is the prime suspect in the case and faces life imprisonment; but, as in other cases in which he faces terror charges, he has not appeared before the courts. He currently resides in the American state of Pennsylvania, and Turkey is seeking his extradition from the U.S.
Last Update: May 16, 2017 9:13 pm
RELATED TOPICS