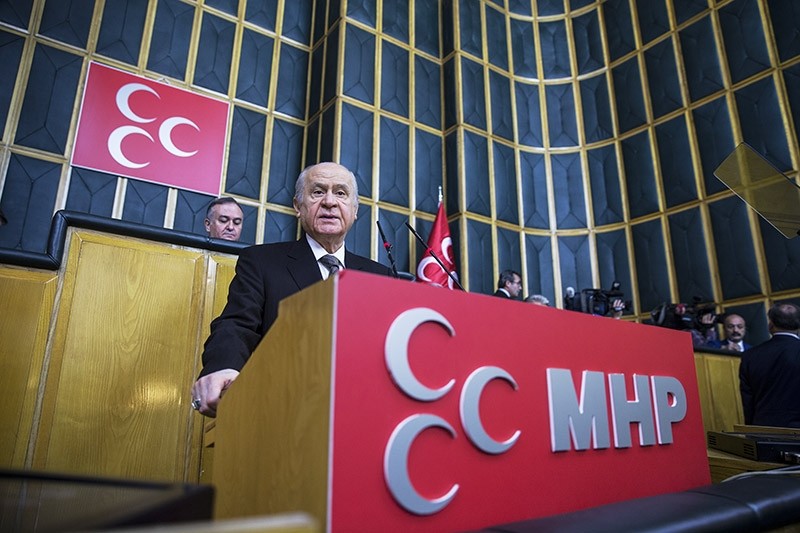 The Nationalist Movement Party (MHP) chairman has voiced his full support for the president ahead of his meeting with his U.S. counterpart at the White House that comes days after the Pentagon announced it would supply heavy arms to the terrorist PKK-affiliated People's Protection Forces (YPG).

In remarks made during MHP's parliamentary group meeting on Tuesday, Devlet Bahçeli said Recep Tayyip Erdoğan's meeting with Donald Trump was of critical and historical importance.

The opposition party leader said "the power of the Republic of Turkey and the Turkish nation is behind the president."

The Pentagon announced on May 9 that Trump himself had approved the arming of the Syrian Democratic Forces (SDF), spearheaded by the YPG, on the pretext that the terror group would drive Daesh from Raqqah, the last Syrian city held by the terror group.

Turkey considers the Democratic Union Party (PYD) and its armed wing YPG as Syrian extensions of the PKK terror group.

Turkey asked several times the U.S. to not cooperate with the YPG-dominated Syrian Democratic Forces (SDF) against Daesh, reminding that a terrorist group cannot be fought with another terrorist group.

The U.S., continuing to run roughshod over the interests of its NATO ally, has so far dismissed the calls to cease its collaboration with the YPG terrorists, the Syrian affiliate of the PKK which is officially listed as a terrorist group by the U.S.

On several occasions, the U.S. pledged Turkey that the YPG will leave Manbij and return on the eastern bank of the Euphrates River; however, the promise has so far never materialized.

The PKK has fought a 33-year long war against Turkey and is also listed as a terror organization by the U.S. and EU. The terror group resumed its armed campaign against Turkey in July 2015. Since then, it has been responsible for the deaths of some 1,200 Turkish security personnel and civilians, including a number of women and children.

Despite the PKK's designation as a terror group, the U.S. has continued to bank on the YPG as its ally in Syria, especially in the fight against Daesh.

The MHP leader also strongly criticized the U.S for its support to YPG terror group and warned that bilateral ties between the two countries could be harmed severely.

Bahçeli said "nobody can consider Turkey as incapable" or degrade the country by considering it on a par with terrorist organizations.

Turkey has repeatedly called on the U.S. to end its ties to the YPG/PYD and offered assistance to take Raqqah.

Trump will host Erdoğan at the White House on Tuesday, which is expected to be followed by a news conference.

The extradition of the Gülenist Terror Group (FETÖ) leader, Fetullah Gülen, and the fight against terrorist groups, including Daesh and the YPG are expected to top the agenda of the meeting.