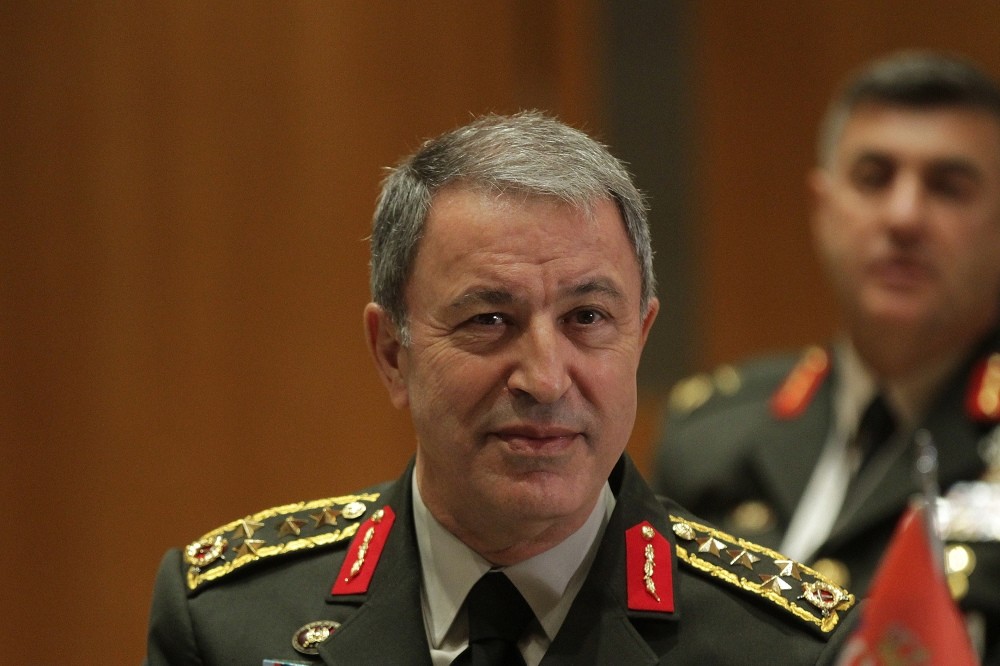 Akar stated on Monday that Turkey's fight against terror will continue within Turkey and across its borders in Syria and Iraq.
by Daily Sabah with Agencies May 24, 2017 12:00 am

Operations against terrorists of the PKK and the affiliated Democratic Union Party (PYD) and its armed wing People's Protection Units (YPG), as well as the Gülenist Terror Group (FETÖ) and Daesh, will continue until the last terrorist is neutralized, Turkish Chief of General Staff Hulusi Akar has stated. Akar was speaking during night exercises carried out by the Turkish Navy late Monday, as part of the Denizkurdu 2017 military exercises.

Gen. Akar, together with other members of the top brass including Commander of the Land Forces, Gen. Salih Zeki Çolak and Commander of the Naval Forces Adm. Bülent Bostanoğlu, observed a night-time artillery exercise from the frigate TCG Kemalreis, stationed off Marmaris in Turkey's western Muğla province.

Yesterday was marked as "distinguished observer's day" of Denizkurdu ("Sea Wolf"); with 21 military attaches from 19 countries following the exercises together with the top command of the Turkish military.

In his address at the event, Akar said every military exercise carried out by the Turkish Armed Forces is conducted in accordance with international law. "As armed forces, all our actions are directed toward building good relations with our neighboring countries and sustaining peace and friendship," he stated. He said Turkey's fight against terror was continuing within Turkey and across its borders in Syria and Iraq.

The Denizkurdu military exercises are the biggest exercises for the Turkish Navy and are held every two years. Nearly 80 vessels are taking part in this year's event, which began on May 13 and runs till Friday. Fourteen frigates, five corvettes, 15 storm boats, eight submarines, six mine-hunting vessels, 13 logistical support ships, four patrol vessels, four sea maritime patrol aircraft, 19 naval helicopters, seven underwater demolition teams and two underwater defense teams from the navy are participating, along with a search and rescue ship, eight other boats and a helicopter from the coast guard.

The Turkish Air Force is also taking part in the exercises.

They conducted a series of simultaneous counterterror operations in various districts of İzmir after a search and detention warrant was issued by the Chief Public Prosecutor's Office. Besides the 18 suspects, digital material and equipment were also seized in the raids.

In the meantime, General Commandership of Gendarmerie also carried out counterterror operations against firms that provide fuel to the PKK and KCK. Some 46 suspects were detained from seven different cities in Turkey.

In Mersin, law enforcers hit the PKK's youth wing detaining 20 suspects, of who eight were later arrested. It was primarily determined that the arrested terrorists had their fingerprints on the improvised explosive devices (IEDs) used in the March 7 terror attack. One of the suspects was put under house arrest.

Founded in 1978, the PKK is listed as a terrorist organization by Turkey, the U.S., and the EU. The terrorist group resumed its decades-long armed campaign against the Turkish state in July 2015.