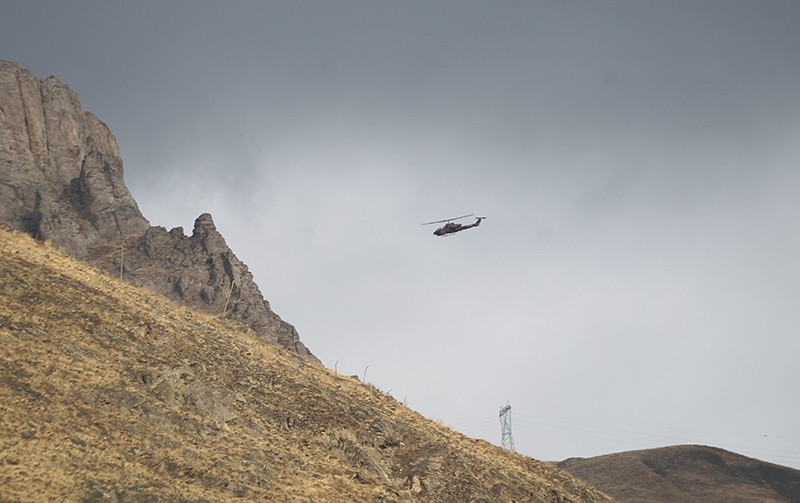 Eight security personnel were killed Thursday near Turkey’s southeastern border by the PKK terrorist group, whose presence in northern Iraq remains a concern for the country in the volatile region

Six Turkish soldiers and two members of the country's village guard were killed Thursday after clashes with PKK terrorists who were trying to cross into Turkey's southeastern Hakkari province from northern Iraq. The attack comes amid the country's efforts to stave off terror threats both from Iraq and its neighbor Syria where a PKK affiliate is active.

The clashes erupted while the terrorists were trying to infiltrate the border town of Derecik's rural area from Iraq. An air-supported operation is underway in the area as clashes continue, reports said.

In a written statement, the Turkish Armed Forces (TSK) said "separatist" terrorists were attempting to carry out an attack in the area that was affected by dense fog and bad weather at the time of the attempt. The TSK said two other security personnel were wounded in the incident and one was heavily injured. "The Turkish Armed Forces will continue the fight against all terrorist groups until the last terrorist is eliminated," the statement also read.

The border outposts located in the mountainous Hakkari and Şırnak provinces are prone to large-scale attacks by PKK terrorists, especially during bad weather when cover from air is limited or impossible. The PKK-held territory in northern Iraq lies to the south of the border, and the PKK's headquarters in the Qandil Mountains is located some 100 kilometers (60 miles) southeast.

The PKK has avoided direct confrontation with the Turkish military since the early 2000s and usually carried out hit-and-run attacks, but the region's proximity to PKK camps and geographical conditions allow the terrorist group to mass its militants in a single location. Thursday's incident was the first direct PKK attack on Turkish soldiers in months amid efficient operations and superior firepower in the countryside. However, the terrorist group frequently targets the military and police with bomb traps or suicide attacks, while kidnapping or murdering public servants and civilians.

The PKK conducts large attacks in the area by concentrating hundreds of militants in one location aiming to inflict the maximum amount of casualties in the security forces and to overrun posts.

The nearby Dağlıca Outpost, Aktütün Outpost and Yeşiltaş Outpost were repeatedly targeted in such attacks, whereas Derecik itself is often targeted with harassment fire and mortar rounds originating from across the border and surrounding area.

More than 12,000 PKK terrorists were also killed in the same period.

The Turkish military occasionally conducts operations in northern Iraq ruled by the Kurdistan Regional Government (KRG) which recently voted for independence from greater Iraq. President Recep Tayyip Erdoğan said Wednesday on his return flight from Azerbaijan that the TSK took action against the PKK terrorist group across the border in Syria before and would do so again in Iraq if necessary.

"We have taken all the necessary precautions along our borders and if anything negative happens in Sinjar, an Iraqi town with a known PKK presence, that risks our security, we may undertake cross-border operations. I told [Haider] al-Abadi what should be done to avert such a scenario," he said, referring to his recent talks with the Iraqi prime minister.