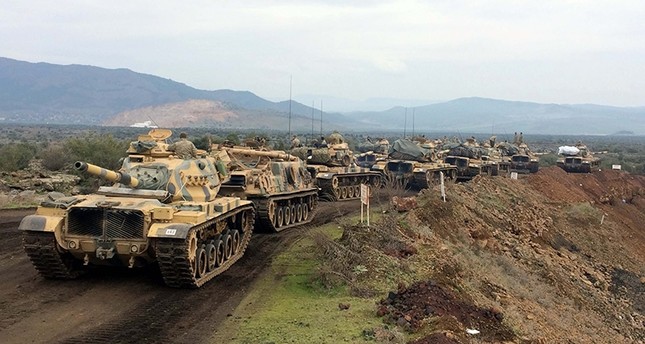 The Turkish Armed Forces (TSK) and the Free Syrian Army (FSA) on Saturday completely liberated a Syrian village from PYD/PKK terrorists as part of the ongoing Operation Olive Branch in northwestern Syria's Afrin.

On day eight of the operation, Turkish forces and the FSA took full control of the Ali Bakki district of the town of Raju, northwest of Afrin, Anadolu Agency reported from the field.

The FSA in cooperation with the TSK cleared the village of all PYD/PKK terrorists. Also, an area in Raju known as point 740 and a terrorist training camp were seized. Over 10 terrorists were reportedly killed during the liberation.

Since the beginning of the operation, Turkish forces and the FSA have already liberated over 2,000 square kilometers of territory.

Meanwhile, the TSK announced Saturday that at least 394 PKK/KCK/PYD-YPG and Daesh terrorists have been killed since the start of Operation Olive Branch, adding that nearly 340 terrorist targets have been destroyed so far in airstrikes.

On Jan. 20, Turkey launched Operation Olive Branch to remove the PKK/YPG and Daesh terrorists from Afrin.

According to the military, the operation aims to establish security and stability along Turkish borders and the region as well as protect Syrians from terrorist oppression and cruelty.

The military has also said that only terrorist targets are being destroyed and "utmost importance" is being put on not harming any civilians.