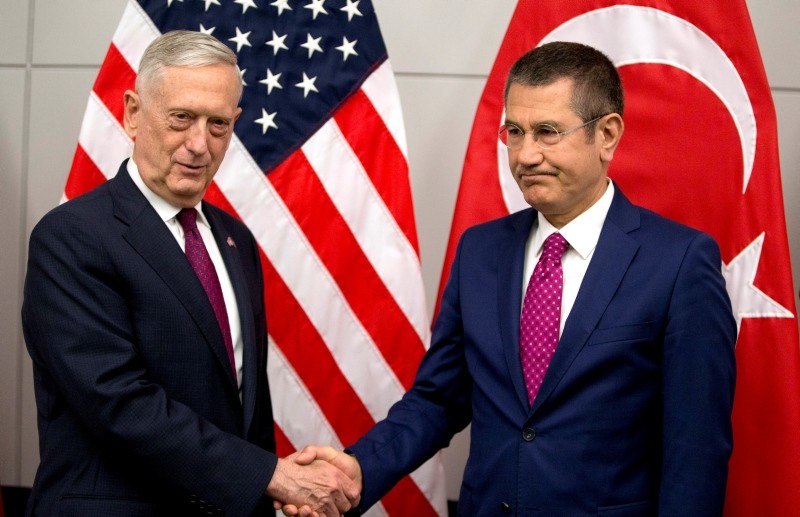 US Secretary of Defence James Mattis (L) shakes hands with Turkish Defence Minister Nurettin Canikli prior to a meeting of NATO defense ministers at the NATO headquarters in Brussels. (AFP Photo)
by Daily Sabah with AA Jun 09, 2018 12:00 am

Turkey's Defense Minister Nurettin Canikli said Saturday his meeting with the U.S. Secretary of Defense James Mattis in Brussels on the sidelines of North Atlantic Council (NAC) session resulted in a detailed, constructive and positive discussion regarding the roadmap on Manbij.

Speaking to reporters following a meeting of the NAC in Defense Ministers' session on Friday, Canikli said that the U.S. largely accepts Turkey's view that the Democratic Union Party (PYD) and its armed wing the People's Protection Forces (YPG) is an element of PKK terrorist organization and is controlling the U.S.-backed Syrian Democratic Forces (SDF), according to the Anadolu Agency.

The minister also said that Turkish and U.S. forces will patrol Manbij together after terror groups withdraw from the area as a deal between Ankara and Washington outlines.

On Monday, a Manbij roadmap was announced after a meeting in Washington between Turkey's Foreign Minister Mevlüt Çavuşoğlu and U.S. Secretary of State Mike Pompeo.

The deal focuses on the withdrawal of the PKK-affiliated PYD/YPG terror group from the northern Syrian city and on stability in the region.

Canikli also commented on the delivery of the S-400 air defense systems from Russia and F-35 fighter jets from the U.S.

"The S-400 system that will be installed in Turkey, and F-35 jets, will not disturb any NATO element and will not pose a threat or risk for them," he said.

He said linking the purchase of Russian air defense systems and fifth generation U.S. fighter jets was not right.

"The F-35 project is a trade agreement. It is a U.S.-led project that is developed together with many NATO countries. Turkey has delivered all of its commitments in time regarding the project," he added.

Canikli also said that Turkey expected the delivery of S-400 and F-35 projects not to be delayed over other reasons.

The defense minister also noted Turkey's determination in fighting the separatist PKK terror group. He said over 500 PKK terrorists have been killed in anti-terror operations in northern Iraq in 2018.

His comments came amid reports that Ankara could take control of Mt. Qandil, the main base of PKK terror group in northern Iraq, in the coming days.

"We are doing what is necessary to totally eradicate [terrorism], and we will do it till the end," he added referring Turkey's ongoing fight against terrorism.

He said Turkey continues to be affected by terror threats coming from northern Iraq.

Airstrikes on PKK targets in northern Iraq have been carried out regularly since July 2015, when the PKK resumed its decades-long armed campaign against Turkey.

The three-decades long terror campaign of PKK, a listed terrorist group by Turkey, EU and the U.S., has killed over 40,000 people, including women and children.