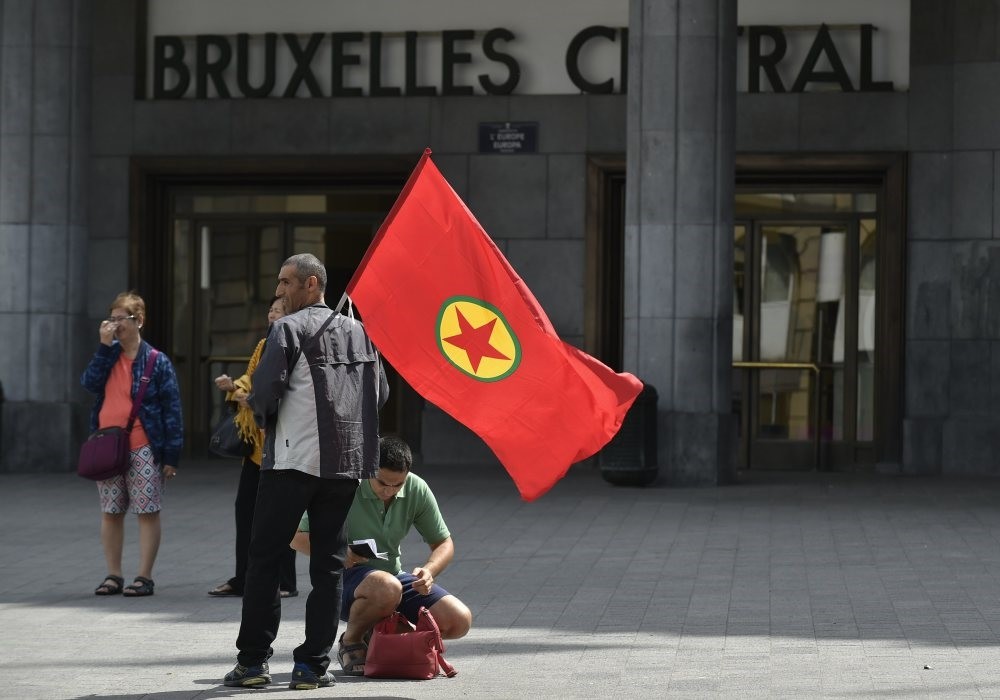 A PKK supporter carries the terrorist group's flag at an August 2015 demonstration in Brussels, Belgium.
by Daily Sabah Jun 22, 2018 12:00 am

A report recently published by the European Union's police agency, Europol, suggested that the PKK uses Europe as a logistic and recruitment base, generating income through illegal activities

The PKK terrorist group is using Europe as a base to procure funding, logistics, weapons, and recruits, Europol, the European Union's police agency, said in a report published on June 20.

Europol's 2018 report on terrorism claimed that there is a process of militant recruitment and indoctrinating Kurds living across Europe. It also accused the PKK terror group of generating income via illegal activities like drug and human trafficking, extortion, kidnapping and money laundering.

"The PKK is known to systematically and, if need be, forcibly collect funds in the EU to finance its activities. The organization also uses front organizations and charities in the EU for this purpose and is suspected of being involved in criminal activities to supplement its income to cover expenses in Turkey, the Middle East and Europe," the report said.

According to Europol, most PKK funds "appear to come from voluntary donations obtained, in some cases, under intimidation. France alone reported an estimate of 6 million euros in proceeds. In November 2017, eight PKK militants were convicted for financing terrorism. The PKK is believed to use Europe as a base for logistics and procurement of weapons and recruitment and transporting the conflict into the Kurdish diaspora. France reported the process of recruitment of militants through the organization Komalen Ciwan (Kurdish Youth Organization). Kurdish youngsters residing in France are lured to join the organization." In its more than 30-year terror campaign against Turkey, the PKK, which is listed as a terrorist organization by Turkey, the U.S. and the EU, has been responsible for the death of some 40,000 people, including women and children.

However, most EU countries, Germany in particular, have been indifferent to PKK terrorism. Ankara levies harsh criticism at Berlin for turning a blind eye to the activities of PKK-linked groups and sympathizers. According to the report, "The total number of attacks is a deviation of the downward trend that started in 2014 owing to a 45 percent increase in the number of attacks in 2017 compared to 2016."

About the terrorist attacks in the EU, Europol said, "Most terrorist attacks carried out in the EU in 2017 were specified as separatist attacks." "The completed separatist attacks were aimed at businesses and critical infrastructure, but also at civilians and the military. A total of 30 individuals were arrested in Germany, Spain, France, the Netherlands and Austria," it added. "France counted 42 attacks, Spain experienced seven attacks. There were 88 security-related incidents in Northern Ireland, of which 58 were shooting and 30 were bombing incidents."

Regarding the foiled, failed and completed terrorist attacks, the report said the U.K. experienced the highest number of attacks with 107, followed by France, Spain, Italy, and Greece with 54, 16, 14, and eight attacks, respectively. "Belgium and Germany reported two attacks each; Finland and Sweden noted one attack each," it added.

Also, regarding military combat, Europol said, "They are trained in combat techniques in military camps in Armenia, Iran, and Iraq."