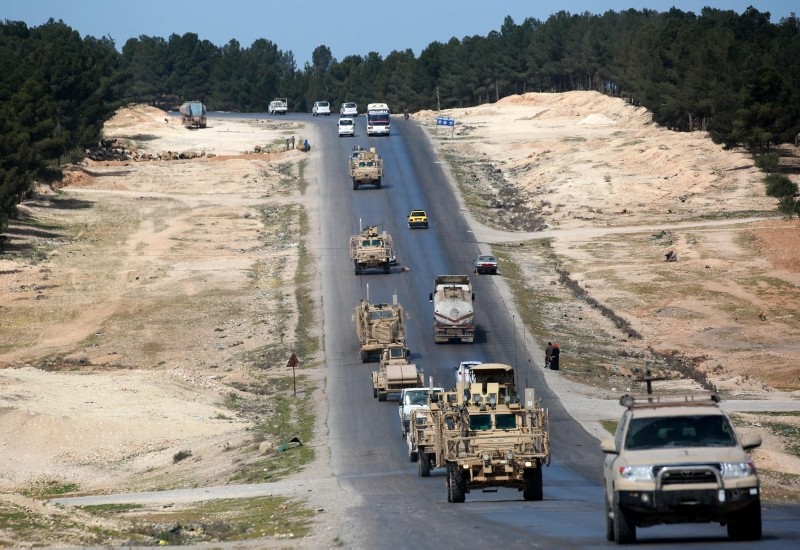 The Foreign Ministry said Monday that the withdrawal of PKK terrorist group's Syrian affiliate still continues and that the recent reports claiming the group has completely withdrawn was not true.

"The reports saying the [People's Protection Units] YPG has completely withdrew from Manbij do not reflect reality on the ground," Foreign Ministry sources said and added that those news are exaggerated.

In line with the agreement reached with the U.S., Turkey has been expecting the complete withdraw of YPG terrorists from the Manbij region.

The ministry's statement came amid a report by Reuters claiming the militia controlling the town said in a statement that, "The Manbij Military Council announces that the last batch of [YPG] military advisers completed its withdrawal on July 15, 2018, after completing their mission of military training and preparation of our forces."

The Foreign Ministry's sources highlighted that the withdrawal of the YPG and joint patrolling preparations has been continuing, yet the reports are "exaggerating" the activity on the ground.

Meanwhile, President Recep Tayyip Erdoğan and the U.S. President Donald Trump had a phone call Monday, where the two leaders discussed the situation in Manbij.

According to presidential sources, it was highlighted that the implementation of the Manbij road map will significantly contribute to the resolution of the Syrian crisis.

The Manbij road map was announced following a meeting in Washington between Foreign Minister Mevlüt Çavuşoğlu and U.S. Secretary of State Mike Pompeo in early June. The first patrols by Turkish and U.S. troops in the region began on June 18.

According to the road map, the Syrian affiliate of the PKK terrorist organization, the YPG, will completely leave the region.

The sources on the ground have also stressed that those who retreated were high-level terrorists of Manbij Military Council coming from the Qandil mountain region in northern Iraq, where PKK headquarters are located.

However, the YPG terrorists are still in the region and they have been reportedly claiming that they are from Manbij in order not to retreat.

News reports on Turkish media have claimed that a joint force will be established between Turkey and the U.S. for the patrolling process. The force will reportedly consist of three Turkish battalions and one U.S. battalion. It will be trained in Gaziantep province and its main aim will be to enhance cooperation.

The U.S. military support for the YPG terrorist group in Manbij had strained ties between Ankara and Washington and led to fears of confrontation between the two NATO allies since there were roughly 2,000 U.S. troops deployed in the city.

Meanwhile, displaced people from Manbij now staying in refugee camps in northern Aleppo have voiced their support for the entry of Turkish forces into their city to ensure peace and security.

While Turkey has been clearly objecting the existence of YPG in the region, the terrorist group's political arm said on Monday that it would work to set up a unified administration for areas it controls.