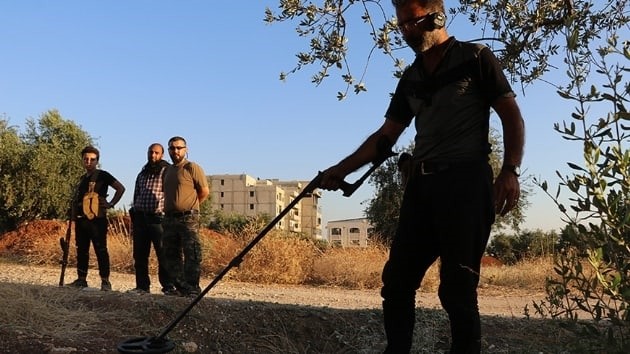 As part of Operation Olive Branch, teams of experts are using detectors to locate explosives planted by the terrorist People's Protection Units (YPG) on farmlands and roadsides in Afrin.

On Jan. 20, Turkey launched Operation Olive Branch to clear out YPG terrorists from Afrin. Some 4,540 terrorists have been killed in the operation so far, according to the Turkish military.

After the city center was liberated on March 18, Turkey has expedited humanitarian efforts to help daily life in the town return to normal.

"While conducting sweep and clear activities, teams show utmost care for the safety of civilians. Our teams make a great effort to clean these mines that put the lives of civilians at risk," Sari said.

He added that 42 explosives were destroyed in the last four days.

Efforts also continue on the mountains surrounding Afrin's northwest Rajo district, where the terrorists are believed to be hiding.

The YPG's ultimate aim was to establish an autonomous region in northern Syria by connecting the northwestern Afrin canton to Kobani and Jazeera in the northeast.

Turkey said that the presence of terrorist forces near its border constitutes a threat and launched military operations and other efforts to clear the region of terrorist presence.