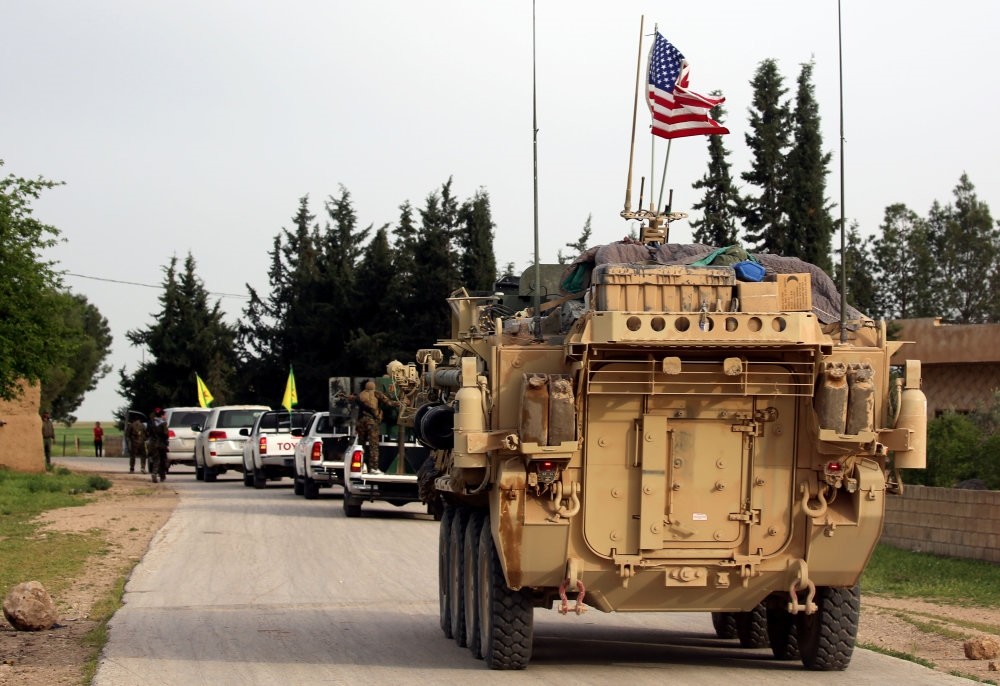 The U.S.-led coalition revealed a plan to form a security army from YPG in northern Syria, which will expectedly draw a reaction from Turkey, as it sees the group as the Syrian affiliate of the PKK

The anti-Daesh coalition led by the United States lends help to the PKK's Syrian offshoot, the People's Protection Units (YPG), under the disguise of the "Northern Syrian Defense Forces," a French general admitted Tuesday.The French general operating as part of the anti-Daesh coalition, Frederic Parisot, said the coalition has trained YPG/PKK terrorists to keep the liberated territory under control after the military operations in Syria. Speaking at a press briefing via teleconference, French Brig. Gen. Frederic Parisot, the director of the civil-military operations of the U.S.-led Operation Inherent Resolve coalition, told reporters at the Pentagon that the aim is to prevent remaining Daesh terrorists from returning as a combative force.

"And to do this, on one side we train the Iraqi security forces that are actually doing a very good job there and on the other side, we train the Northern Syrian Defense Force that is actually as well doing a good job," Parisot stated. When asked by Anadolu Agency (AA) what the Northern Syrian Defense Forces stands for and whether the training includes border security, Parisot described it as the Syrian Democratic Forces (SDF) and said there are no border forces in the training.

"They are going to have what we call security forces," Parisot said. "Obviously it is the same on the Iraqi side as they need to consolidate the gains they had on the military side after the military operations."

Previously, it was reported that the United States was gearing up to form a border force made up of YPG terrorists. "The SDF [YPG/PKK] were beginning to train internal security forces, border security forces and explosive hazard reduction specialists and have drawn up plans to restructure their counterterrorism forces," according to the quarterly Lead Inspector General report to Congress in February.

The issue was met with anger and frustration in Ankara. Foreign Minister Mevlüt Çavuşoğlu said at the time that one-sided actions, such as establishing a border security force, is against the spirit of a coalition since in the fight against Daesh, the main thing is to have unity over an aim and joint common action.

In January, U.S. Central Command (CENTCOM) also announced plans to establish a 30,000-strong border security force in northern Syria with the SDF, a move that was criticized by Turkish officials due to Ankara's national security concerns. Despite U.S. officials denying the establishment of such a border force, the Pentagon's report confirmed Turkey's concerns.

Besides the training to be given to the SDF, the report said the U.S. continued to equip the group but had taken measures to track the transfer of equipment allocated for the YPG, in particular to try to ensure that material provided to the YPG is used for its intended purposes.

In the wake of Turkey's repeated warnings to the U.S., the idea of training YPG militants as a border force against Turkey was not realized. However, Parisot's statement drew ire as it seems it may still be a possibility.

That being said, the Pentagon's 2019 budget will include $300 million for the train-and-equip program for the SDF and $250 million for building a "border security force" in Syria, the U.S. government said. The money allocated for the SDF's training is supposedly part of the spending for the border security requirement for anti-Daesh missions.

In response to another question about the area the Daesh terror group holds in Syria, he said the group has approximately 190 square miles (492 square kilometers), including a few cities, where roughly several hundred Daesh terrorists remain. "It is quite a small [area]. There are few cities in there, but the rest of the line is quite open. We hope that the last combat against Daesh will go pretty quickly," he added. Turning to a question whether France will allow French nationals who joined Daesh to come back to the country, Parisot cited his government, saying the French government does not want them back.