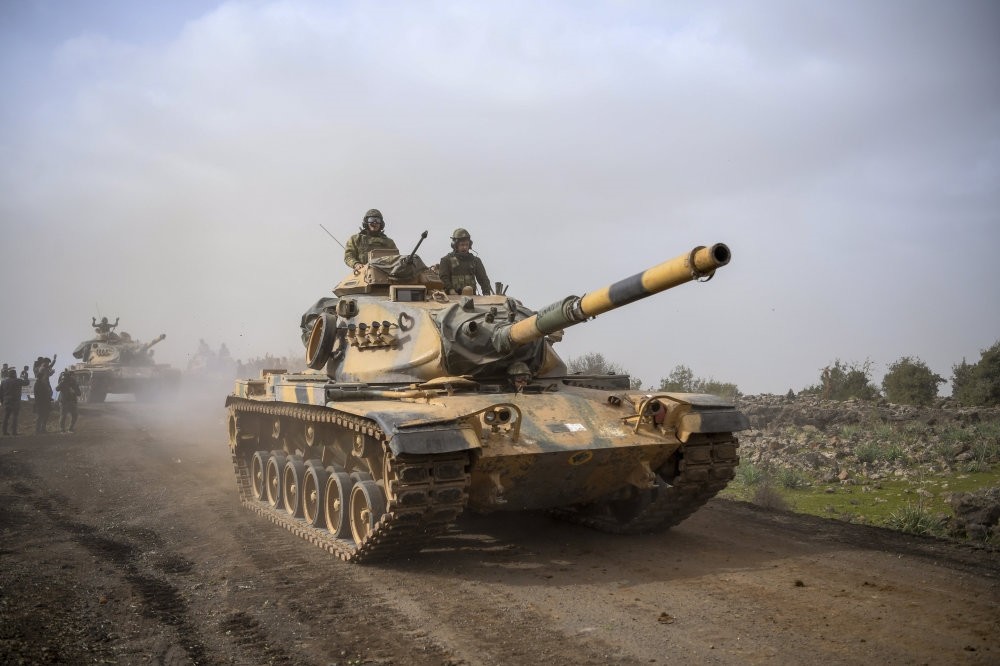 Turkish tanks head for Afrin to clear the area of YPG terrorist elements during Operation Olive Branch, Jan.22.
by Özgenur Sevinç Nov 02, 2018 12:00 am

Turkey has said it is resolutely committed to clearing the YPG terror threat from northeastern Syria and recently shelled YPG positions along its borders. Experts say Ankara will no longer wait around for the Manbij deal and will take any necessary steps to address the issue

Turkey has been increasing its pressure on the PKK's Syrian wing, the People's Protection Units (YPG) with recent operations in order to face threats posed against its national security. As Ankara has started to consider the sluggish Manbij process a distraction, since it has been more than a few months that a deal with Turkey and the U.S. was reached and the first joint patrolling started just yesterday, it will be focusing on eliminating terror threats east of the Euphrates while continuing efforts for the implementation of the Manbij road map with the U.S., experts explained. "The Manbij process with the U.S. has been very slow, which has made Ankara realize that it has been distracted from its objective of eliminating terror threats while the YPG continues its efforts," said Can Acun, a Syria expert, adding that last month the YPG formed a political entity called the General Council of Self-Administration in Northern and Eastern Syria.

In the face of threats posed against its national security, Turkey recently launched attacks on the YPG east of the Euphrates River and has been vocally stressing that the terrorists along Turkey's borders will be eliminated. "The terror group is digging trenches in Manbij as they have done in Afrin, despite promises made for the PKK/PYD/YPG's withdrawal from Manbij," Defense Minister Hulusi Akar told lawmakers yesterday in the planning and budget commission, referring to the PKK's Syrian affiliate the Democratic Union Party (PYD) and its armed wing, the YPG.

The terror group [YPG/PKK] should know that it will be buried in the trenches it has dug," he said.

The Manbij agreement was signed between Turkey and the U.S. in early June that foresaw a three-month timetable for the withdrawal of the YPG from the northeastern Syrian province and joint patrols to be conducted by militaries of both countries in order to establish stability in the region.

"Turkey does not want to waste time in Manbij as it is aware of ongoing activities of terror groups in other areas. The defense minister recently announced that the joint training between the two countries were complete and that patrolling would start soon. Yet, there has been a significant delay in the schedule of the road map," said Oytun Orhan, a Syria expert.

President Recep Tayyip Erdoğan reiterated on Tuesday Turkey's determination to conduct an anti-terror operation in northern Syria east of the Euphrates River, saying preparations and plans for an offensive against the YPG terrorists were complete.

Accordingly, Turkish troops stationed at the Syrian border hit YPG terrorists on Sunday and Wednesday in the Ayn al-Arab area east of the Euphrates River in northern Syria, killing at least 14 terrorists.

On Sunday, the Turkish military shelled YPG positions in the Zor Magar area to the west of Ayn al-Arab district, also known as Kobani.

In relation to the recent operations by Turkey, Orhan underscored, "a large-scale operation is not expected right now due to the presence of the U.S. bases and troops in the region; and it would cause confrontation of the two NATO allies." He also stressed that Turkey will aim at YPG targets step by step.

Orhan highlighted that the recent developments including the Sochi deal with Russia and the quartet summit on Syria have strengthened Turkey's position in Syria.

"With the Sochi deal, the sides managed to preserve the cease-fire and freeze the confrontations between the regime and the opposition. The deal has been significant in restoring stability. Following that, the attention of Turkey, Russian and the regime as well will turn to the east of the Euphrates," he underlined. Turkey and Russia reached the Sochi deal on Sept. 17 which focuses on establishing a buffer zone cleared from heavy weapons and radicals in Idlib, the last stronghold of the opposition.

The deal has been internationally welcomed as it prevented a possible humanitarian disaster. Ankara's efforts and the agreement were also praised in the quartet summit in Istanbul. Turkish, Russian, German and French leaders attended the summit which emphasized that territorial integrity of Syria must be respected.

"On the same day of the summit, Turkey hit targets in Ayn al-Arab, which shows that Turkey will focus on the threats east of the Euphrates," Orhan said.

Meanwhile, there were some statements from the U.S. regarding Turkey's recent steps. "Unilateral military strikes into northwest Syria by any party, particularly as American personnel may be present or in the vicinity, are of great concern to us," the U.S. State Department Spokesperson Robert Palladino told reporters yesterday. He added that the coordination and consultation between the U.S. and Turkey on issues of security concern is a better approach.

Commenting on the U.S.' approach to these operations, Acun highlighted, "as the U.S. has long-term objectives in the region and [are] heavily invested in the YPG with arms support, it will not be in favor of Turkey's operations that would be similar to that in Afrin."

He underscored that the U.S. would attempt to prevent Turkey's operations by using the pretext of the fight against Daesh.

Furthermore, the YPG/PKK announced it has halted operations against Daesh in Deir ez-Zor, eastern Syria as a reaction to Turkey's anti-terror operations in Ayn al-Arab. Acun stressed that in order to prevent Ankara's operation, the fight against Daesh has been used as an excuse.

Previously, the U.S.-backed Syrian Democratic Forces (SDF), which is dominated by YPG terrorists, claimed that attacks by Turkey had led to a temporary halt in an offensive against Daesh in eastern Syria's Deir ez-Zor region. Despite their advance against Daesh starting from late 2016, while also receiving intense air support from the coalition in the meantime, the SDF has spent months trying to eradicate the last remaining Daesh enclave comprised of a couple of towns and villages near the border with Syria.

Turkish officials have repeatedly cited Daesh's expansion as a way to legitimize the takeover of eastern Syria by PKK terrorists and their Syrian affiliates. Turkey considers the YPG's presence on its border with Syria a grave threat to its national security.

In response to the YPG and Daesh threats near its border, Turkey has carried out two cross-border military campaigns in the past two years.

Jarablus, al-Rai and al-Bab districts from the Daesh terrorist group through Operation Euphrates Shield launched in August 2016. On Jan. 20, Turkey launched Operation Olive Branch to push the YPG and Daesh terrorists from northwestern Syria's Afrin, liberating the region on March 18 with the help of FSA forces.

The U.S.' Special Representative for Syria, James Jeffrey told Al Arabiya yesterday that American troops in northeast Syria "were coordinating with the SDF and with local forces to deter ISIS."

Commenting on joint American-Turkish patrols in Manbij, he said the U.S. resumed efforts to reach a solution between its "two partners."

In relation to the statements by Jeffrey, Orhan stated that the U.S. has long been attempting to find a middle point regarding the issue and trying to separate SDF from YPG-PKK. However, he added that "Turkey will not approve any plan of the U.S. which includes the YPG. These would be vain efforts."

Orhan said that "Ankara has been pointing out that it will not allow any terror corridor along its borders, stressing that it has no problems with people living in the region."

Meanwhile, Jeffrey also told Euronews yesterday that the U.S. will not lend help to the reconstruction efforts of war-torn Syria and will urge the EU, U.N. and other international organizations such as the World Bank to follow in their footsteps.

Explaining the reasons for the decision, Jeffrey commented that Russia claims that the war has ended and the country needs to be reconstructed, yet, half of the country is still controlled by actors other than the Assad regime. Pointing out that an overwhelming number of Syrians fled to neighboring countries and armed groups are still present in the country, Jeffrey underscored that financing the reconstruction plans of the regime by U.S. resources will be impossible and cynical under current circumstances.